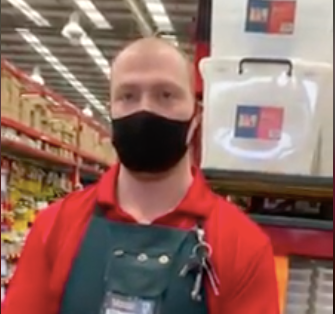 Bunnings staff were praised for their handling of the incident. Photo: Facebook

A video of a woman refusing to wear a face mask inside a Bunnings store has gone viral, with state and federal leaders slamming her behaviour.

It’s just one example of evidence of ‘anti-masker’ actions, branded “selfish” by Australian leaders, by people falling for coronavirus conspiracy theories and false claims about masks and human rights.

The trend for people filming themselves flouting health laws has been met with outrage and disbelief; the videos came on the same weekend coronavirus victims revealed their ongoing struggles and 10 more Victorians died from the virus.

The Bunnings footage posted to Facebook is filmed by a woman walking into the hardware store, presumed to be in Melbourne where face masks are mandatory, before she is immediately stopped by staff and asked if she has a mask.

“And you are not authorised to ask me or question me about it.”

The woman is then referred to the store manager, who tells her she needs a medical certificate if she wants to continue into the store without a face mask.

“I can have you sued, personally, for discriminating against me, as a woman,” the woman can be heard saying on the video.

She argues the company’s condition of entry did not apply to her, before claiming the ruling was a “breach of the charter of human rights”.

“It is my right, as a living woman, to do whatever I want,” she said.

The footage is the latest example of the dangerous actions of a minority of Australians – and following a trend by some Americans where people are refusing to wear face masks and filming their arguments with staff members and police in public places.

Their arguments are generally false and lacking evidence, including the incorrect assertion that masks are unlawful.

In another incident at the weekend, the same Melbourne woman threatened to sue officers who questioned her for not wearing a mask.

In a video filmed by someone who was accompanying the woman, she can be heard arguing with police and telling them the legislation for enforcing the use of face masks “has not been consented by the Queen”.

“So that legislation is fraudulent,” the woman tells the police outside a Melbourne shopping centre.

A policeman replies: “That’s your personal belief – that’s not the belief we work under”.

The woman told officers she does not “consent” and “will be suing you personally”.

“You will both be personally sued for $60,000 each,” the woman told the officers.

Both incidents have sparked outrage on social media, with many users calling the woman ‘Karen’ – the internet’s nickname for stereotypical, entitled white women.

“If you are just making a selfish choice that your alleged personal liberty, quoting something you’ve read on some website – this is not about human rights,” he told reporters in Melbourne.

“Ten families are going to be burying someone in the next few days.

Later that afternoon, federal deputy chief medical officer Nick Coatsworth weighed in on the Bunnings incident, saying “that sort of behaviour has to stop”.

“In all seriousness, it is just having a mask on,” he told reporters.

“Whilst I understand that it can be a difficult thing to get used to, the idea that it is some sort of imposition on someone’s freedom or individual rights, I’m not sure I can be convinced of that.”

The cost of ignoring coronavirus laws

On Sunday morning, Victoria Police said officers had issued 126 fines over the past 24 hours.

Of those, 20 people were fined $200 for failing to wear a face mask, including a man and a woman at Ferntree Gully.

The pair, who were with two children, were stopped by police near the 1000 Steps trail walk about 2pm on Saturday and asked why they were not wearing face masks.

The 47-year-old man and 51-year-old woman, both locals in the area, refused to give police their details.

After multiple requests, the two were arrested and will be issued with $200 fines for failing to wear a face covering.

Of the 126 fines issued in total, 17 were dished out at vehicle checkpoints on main roads.

In one incident, a South Melbourne man was fined after confessing to police at a checkpoint in Wyndham that he was on his way to go surfing at Torquay on the Surf Coast, about 90 minutes southwest of Melbourne.

In addition to conducting 14,908 vehicle checks, police visited 1093 homes, businesses and public places across the state.

Although police will use discretion in the first seven days since the CHO direction was issued, officers “will not hesitate to issue fines to people who are obviously and blatantly showing a disregard for community safety by failing to wear a mask,” a police spokeswoman told The New Daily.

“Police are working incredibly hard to keep the community safe and this type of behaviour is unacceptable and unnecessary.”