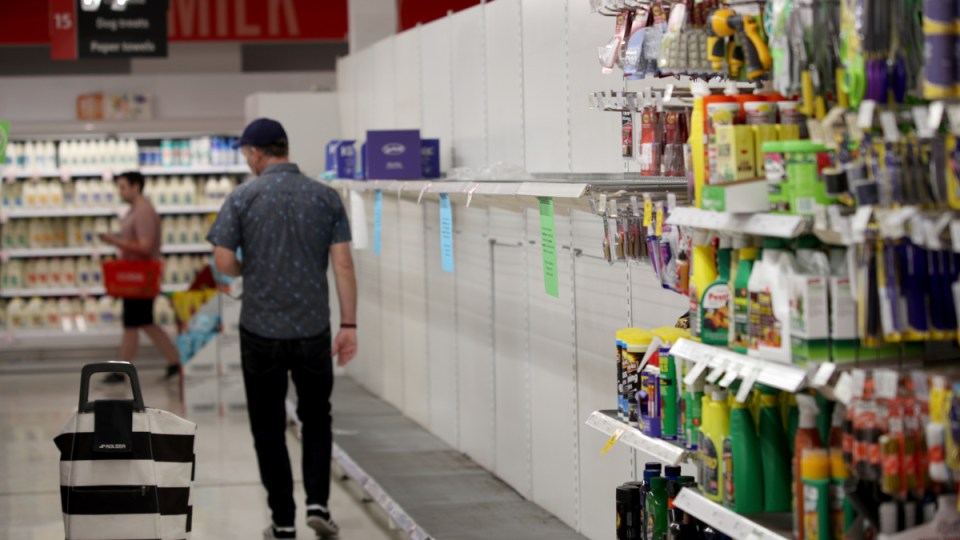 Empty shelves at a Coles in Adelaide early in March. Photo: AAP

Stop hoarding. That’s the blunt message from the Prime Minister to Australians as panic buying sparked by the spread of the coronavirus shows no sign of easing.

“It is not sensible, it is not helpful and it has been one of the most disappointing things I have seen in Australian behaviour in response to this crisis,” Scott Morrison said on Wednesday.

“It’s ridiculous, it’s un-Australian, and it must stop.”

Mr Morrison also announced a host of broader restrictions for Australians on Wednesday, including bans on indoor gatherings of more than 100 people.

His blunt message came as Woolworths introduced two-per-person limits on all packaged items across its supermarkets.

“This means that you’ll only be able to buy two products from any single category or section (such as coffee), regardless of the brand or variety,” the company said in a statement.

“These are in addition to any other limits already in place.”

Only a handful of items – including milk, wet pet food and fresh fruit and vegetables – are not now subject to purchase limits.

Coles followed with its own updated limits by late Wednesday afternoon.

Mr Morrison was backed up by two state premiers on Wednesday. A clearly frustrated Victorian Premier Daniel Andrews said “the Prime Minister was 100 per cent correct”.

“It is of no benefit to anyone. It is causing distress, it is not right. We will get a care package to you with the basics if you find yourself unable to leave home and you don’t have what you need,” he said.

In Western Australia, Premier Mark McGown said police had increased their presence at shopping centres to deal with “jerks, drongos and bloody idiots”.

“I’d urge them to stop, have respect for each other, stop this panic buying, this violence, this stupidity going on,” he said.

They took out newspaper advertisements across the country after more footage emerged online of customers verbally attacking retail staff because of empty shelves.

Aldi, Coles, IGA and Woolworth said they were doing everything they could to get as much produce into stores as possible, often under difficult circumstances.

“We ask you to please be considerate in the way you shop,” the ad says.

“If you buy only what you need and stick to the product limits, it helps everyone, especially the elderly and people with disability.

“No one working or shopping in any of our stores should experience abusive or aggressive behaviour.”

Coles on Wednesday held its first nationwide “community hour” for seniors and pension card holders from 7-8am, before opening to everyone else.

On Tuesday, people with government-issued concession cards flocked to Woolworths, which implemented a similar measure, and IGA is considering whether to roll out the same.

There were similar reports from supermarkets in Sydney on Wednesday.

From Wednesday, Aldi has reduced its opening hours across Australia, and extended purchasing restrictions to a host of products – ranging from nappies and sanitary products to flour and tinned goods.

“This is uncharted territory for many of us,” the company said in a statement.

“Please remember to be kind, be calm, be empathetic and – most of all – be courteous.”

“If you have already purchased additional items you no longer want, please look at donating them to community organisations or neighbours who have been struggling to purchase them during this time,” it said.

Coles is trying to employ more than 5000 casual workers to help restock its supermarkets quicker. It has restricted online orders to the elderly and vulnerable and both it and Woolworths have shut down their click-and-collect services.