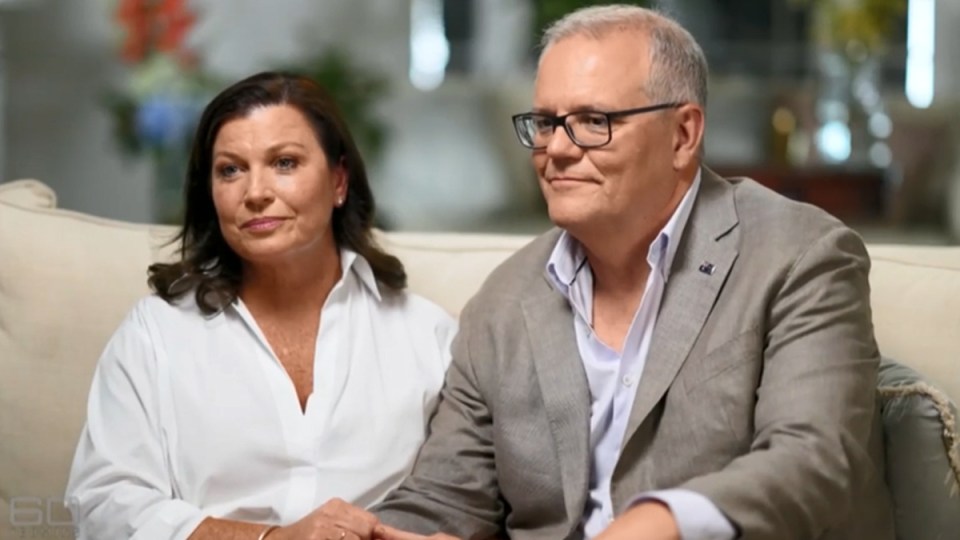 Scott Morrison is running out of time and plausible ideas to save his floundering government, with new polling confirming his worst fears.

Those fears led him to approach the 60 Minutes program late last year to help him launch a makeover of his image among many as an incompetent, dishonest bully who has a problem with women.

The Nine Network’s flagship current affairs program obliged, assigning a crew to go into the inner sanctum of the Morrison family and meet the Prime Minister’s “secret weapon”, his wife Jenny.

For a politician who over the years has insisted his family and his religious belief are off limits, they are now apparently part of his arsenal to stave off Labor and continue in power.

The show went to air just as Newspoll was released online.

It was a dire scene setter for the size of the repair job Morrison was hoping to launch.

This poll is significant for the fact that it showed the previous fortnight’s result giving Labor a 12-point lead two-party preferred was not a one-off outlier.

This poll statistically showed nothing much has changed – the lead dropped to 10 points, well within the margin of error and still keeping Labor in a landslide-winning position.

Polling analyst Kevin Bonham has tracked the survival of previous governments that have similarly recorded two consecutive polls where the gap was this big or worse.

In 2019, the Morrison government was in a similar pickle eight months out from the election.

Back in 2004 John Howard had his turn seven months out from polling day, as Bonham notes Morrison this time only has three months to turn around his fortunes.

He is in a much more precarious position than he was last time.

Coincidentally, the Australian National University’s survey conducted at the end of January found only a third of Australians – 34.5 per cent – have confidence in the federal government, down from a peak of 60.6 per cent in the first year of the pandemic.

It is highly improbable a loving wife’s testimony on how wonderful her husband is will be enough to convince voters who are this disillusioned about him that they have got it wrong.

Not helping in that regard was the Prime Minister, who sat back with a smile on his face while his wife took the blame for their misguided secret Hawaiian holiday at the onset of the 2019 bushfire catastrophe.

There was something dissonant when Mrs Morrison excused her husband’s initial apparent lack of empathy in regard to Brittany Higgins in terms of him being “all about problem solving”.

She ignored the fact Morrison claimed “Jen” had to prompt him to see there was a problem in the first place.

This “secret weapon” seriously misfired in her reaction to journalist Peter van Onselen’s quoting of text messages at the National Press Club describing the PM as “a horrible, horrible person” as well as  “a complete psycho”.

Mrs Morrison said she felt “sick to the stomach” and no doubt she did, but she didn’t acknowledge the hurt Morrison himself has caused to other families, beginning with a genuine refugee teenager cruelly incarcerated for nine years or the treatment of other asylum seekers like the Murugappan family, whose two small daughters suffered serious health issues from their detention on Christmas Island.

Morrison himself has tried to brush off Barnaby Joyce’s view of him as a “hypocrite and a liar” by saying politics is “a brutal business”.

One would only have to ask Michael Towke what the Prime Minister means by this.

Fifteen years ago Towke soundly defeated Morrison for Liberal pre-selection for the seat of Cook only to suffer an apparent dirty tricks campaign that led to a substantial settlement for defamation after he was stripped of the endorsement.

Morrison assured Nine’s Karl Stefanovic he has worn out the carpet on his side of the bed praying for Australians during the pandemic.

Is it too much for Australians to expect a Prime Minister to actually do his job when he gets off his knees, especially as new evidence came to light in Senate estimates on Monday of the warnings he had received over the past two years on the need for rapid antigen tests to be readily available when restrictions are eased and borders reopened?

Stefanovic ended the ‘Meet the Morrisons’ segment with the promise the show would bring a story on ALP leader Anthony Albanese “in the next few weeks”.

But the Labor leader is wary, unwilling to go down the path of competing stunt picture opportunities.

If Morrison was hoping for a compare and contrast between his happy marriage and family with the divorced Albanese at home, he is not going to get it.

A clue to his thinking came on ABC radio when Albanese told Sabra Lane “people want a Prime Minister who will just do their job”.

He says the government’s lack of agenda is being replaced with a Prime Minister who “pretends he’s a fighter pilot, a hair shampooer or a racing car driver or a ukulele player”.

None of it is convincing the voters.

Paul Bongiorno: Government throws the kitchen sink at Labor, but the stopwatch is ticking down