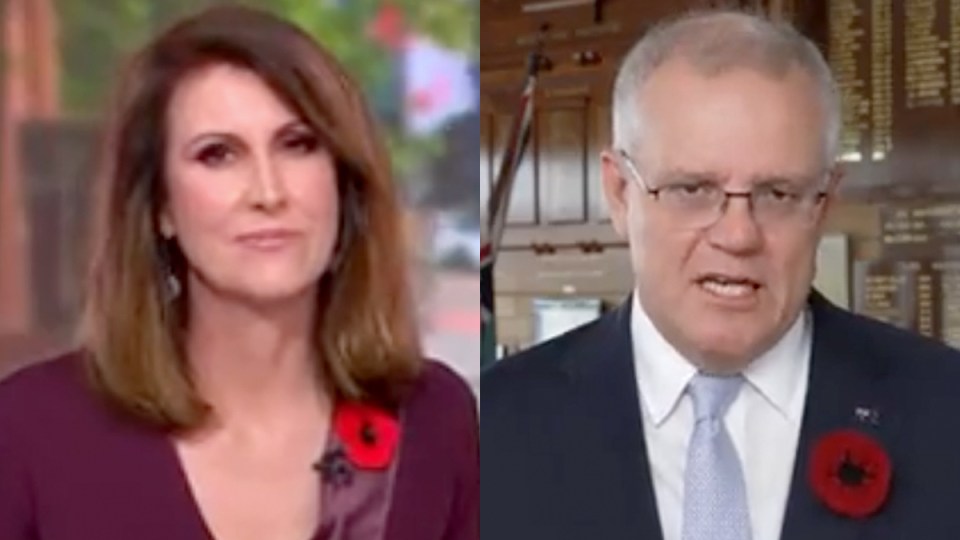 Scott Morrison made the claims in morning TV interviews on Sunrise and Today. Photo: TND

Labor has branded as “extraordinary” and a “lie” comments from Scott Morrison that it is siding with China and planned to increase fuel prices at the last election, as the Prime Minister continues his backflip on previous criticisms of electric vehicles.

“It’s just extraordinary … He’s prepared to say anything at all and hope that people don’t hold him to account for what he said yesterday,” Opposition Leader Anthony Albanese said.

Mr Morrison’s publicity tour of Victoria continued on Thursday with a round of morning television interviews, before attending Remembrance Day commemorations in Melbourne.

Speaking to Sunrise, the PM claimed Labor’s 2019 election policies would have “put up the cost of fuel to try to force people to switch” to electric vehicles.

Mr Morrison also repeated debunked claims that Labor’s target for electric vehicles – aimed at 50 per cent of sales by 2030 – would have been a binding mandate. Challenged on that by the Seven hosts on Thursday, Mr Morrison then instead turned to a false claim that Labor wanted to put up petrol prices.

On Nine’s Today, Mr Morrison was asked about French president Emmanuel Macron branding him a liar over the nuclear submarine stoush. The PM claimed that Mr Albanese had “backed in the Chinese government and a number of others in having a crack at me as well”, but did not detail what he meant.

Mr Morrison has previously shrugged off questions about the AUKUS pact being aimed at countering China. Asked in a September 2GB interview whether the nuclear submarine plan was specifically aimed at China, he said he had “seen all that commentary” but that “all I know is that we’re doing this to ensure that our region is stable”.

Labor reacted with outrage to Mr Morrison’s comments, fiercely denying the unfounded allegations it was  siding with China or that its 2019 EV policy had anything to do with fuel prices.

“He’s been on television this morning making these mad claims, saying that the electric vehicles policy that we took to the last election somehow had something to do with fuel prices.”

Labor’s 2019 plan would have made fuel efficiency standards more stringent, likely raising the price of gas-guzzling cars. However, better fuel standards would lead to greater savings on petrol, according to a 2019 report from the Department of Infrastructure.

“Not even in the 2019 election campaign did the LNP claim Labor policy would put up petrol prices. But Morrison is dishonestly saying it now,” he tweeted.

Other senior Labor sources described the comments as “another Morrison lie” and a “smear”.

Mr Morrison has spent this week on the road in Newcastle and Melbourne, spruiking the government’s net-zero emissions policy. He has announced funding for electric vehicles and clean finance, but is attempting to turn both issues into an election headache for Labor.

A proposed $500 million investment for the Clean Energy Finance Corporation is tied to legislation allowing investment into carbon capture and storage – a controversial and unproven technology that Labor has previously voted against.

Mr Morrison encouraged Labor to back the move. But The Australian reports at least two of the government’s own senators – Matt Canavan and Gerard Rennick – planned to vote against the plan.

“It’s important that we do do it,” the PM said of the carbon capture plan.

“The Liberal-Nationals way is to invest in this technology, so we’ll be able to hit those marks and let the entrepreneurs, the risk-takers, the scientists, the manufacturers, they’re the ones who are going to make this work. Not governments getting together and telling everybody what to do.”

Mr Morrison told Today that the government’s net-zero plan modelling would be released “before we get back to parliament”, in two weeks.

‘Another lie’: Morrison’s ‘mad claims’ on EVs have Labor outraged