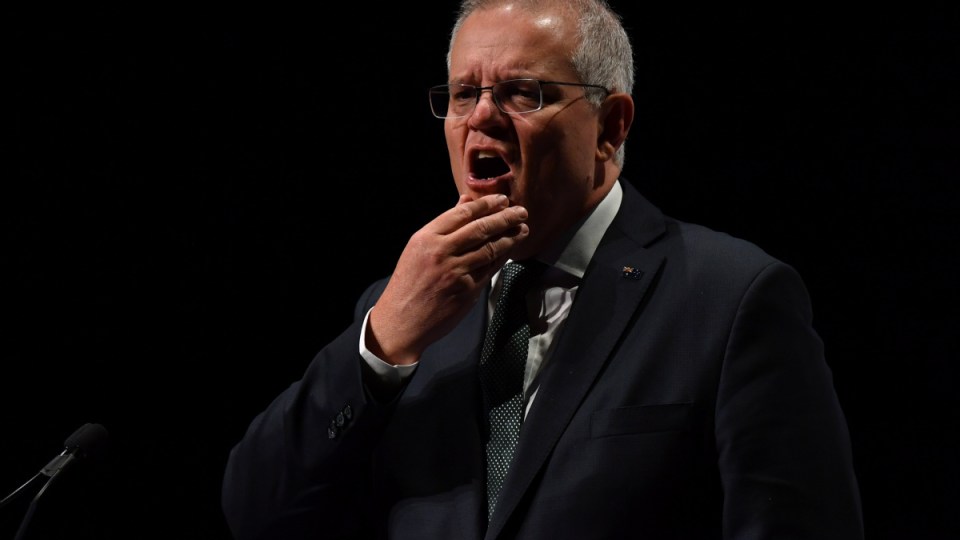 Labor is considering backing Scott Morrison’s plans to further invest in the unproven carbon capture and storage technology, potentially blunting a Coalition wedge as the Opposition continues to hammer the government on “lies” about electric vehicles.

“This is a revolution that is coming, whether Barnaby Joyce likes it or not,” Mr Kean said

The Prime Minister continued his road trip to spruik the government’s climate policies in Melbourne on Wednesday, giving a speech to the Victorian Chamber of Commerce where he announced $500 million in funding to clean technology start-ups.

The government claims these could include improved solar panels, smaller batteries and cleaner steel.

But the fund is tied to expanding the ability of the Clean Energy Finance Corporation (CEFC) to invest in carbon capture and storage, a controversial technology in which pollution – including from coal or gas mining – is stored underground or in soil.

It is a “priority technology” under the government’s net-zero plan, but Labor has opposed the CEFC being able to invest in it, arguing it is not a clean technology.

Carbon capture has been described by former Prime Minister Malcolm Turnbull as a “scam” and “proven failure”.

The Smart Energy Council has rubbished it as “fantasy”, while Climate Council economist Nicki Hutley said it was “unproven”.

“No carbon capture and storage projects have been delivered anywhere on the planet on time, on budget or with the promised emissions reductions,” Smart Energy Council chief executive John Grimes said on Wednesday.

“Coal and gas are not ‘clean energy’.”

The government has set up the announcement – tying the increased funding to a CEFC measure Labor has opposed – as a “wedge” for the Opposition, forcing them to either block the new funding or vote in favour of carbon capture.

Labor did not rule out supporting the changes, claiming its earlier opposition to carbon capture investment under the CEFC was only about stopping a limited pool of money being diverted from cleaner technologies.

“Our objection has been the constant attempts by the government to dilute ARENA and CEFC funding away from renewable energy into carbon capture and storage. If this is genuinely new money then we’ll look at the detail,” shadow climate minister Chris Bowen told the ABC.

He claimed the government’s background briefings to journalists on Wednesday’s plans were only focused on creating “some sort of fight with Labor, not about actually doing anything for the climate”.

Labor leader Anthony Albanese said the Opposition would “wait and see what [the government] come up with”, but questioned why Wednesday’s announcement hadn’t come earlier.

“If there was any substance to any of these policy announcements, why weren’t they made then, when the government explicitly said in its documentation, its pamphlet, that there were no new policies?” Mr Albanese asked.

On the ABC’s Insiders on Sunday, Mr Bowen said Labor was open to carbon capture and a “conversation” about more funding, but did not see it as a major solution.

“I’m a pragmatist. If it can work, fine … carbon capture and storage in my view will play no role for example, in coal-fired power,” he said.

“The government puts too much store in carbon capture and storage, uses it as an excuse to avoid reducing emissions in other ways.”

But Mr Morrison also faced criticism for Tuesday’s electric vehicles announcement, where he denied having backflipped on earlier criticisms of the cleaner cars.

Despite welcoming funding for charging stations in homes and public spaces, some in the car industry questioned why the Coalition wasn’t pledging more support to bring down the prices of expensive electric vehicles.

On Wednesday, NSW Treasurer Mr Kean announced another $105 million for his state’s electric vehicles policy, claiming it was a “nation-leading” plan of nearly $600 million – more than the federal government’s investment.

“It’s great that the federal government is getting on board the electric vehicle revolution, but they can obviously do a lot more,” Mr Kean said.

NSW’s policy would remove stamp duty from cheaper electric vehicles and offer $3000 rebates, as well as millions in support for commercial fleets and charging.

“The reality is that the right-hand car market is changing to electric. The last thing we want is for Australia to become a dumping ground for the vehicles that the rest of the world doesn’t want,” Mr Kean said.

Electric Vehicle Council chief executive Behyad Jafari, who was critical of the federal policy, stood alongside Mr Kean to back the NSW plan.

Mr Kean also announced government forecasts that half of new car sales in NSW by 2030 would be electric vehicles – the same policy target federal Labor took to the 2019 election and was savaged by Mr Morrison at the time.

The Coalition’s federal plan only forecasts 30 per cent of new car sales to be electric by 2030.