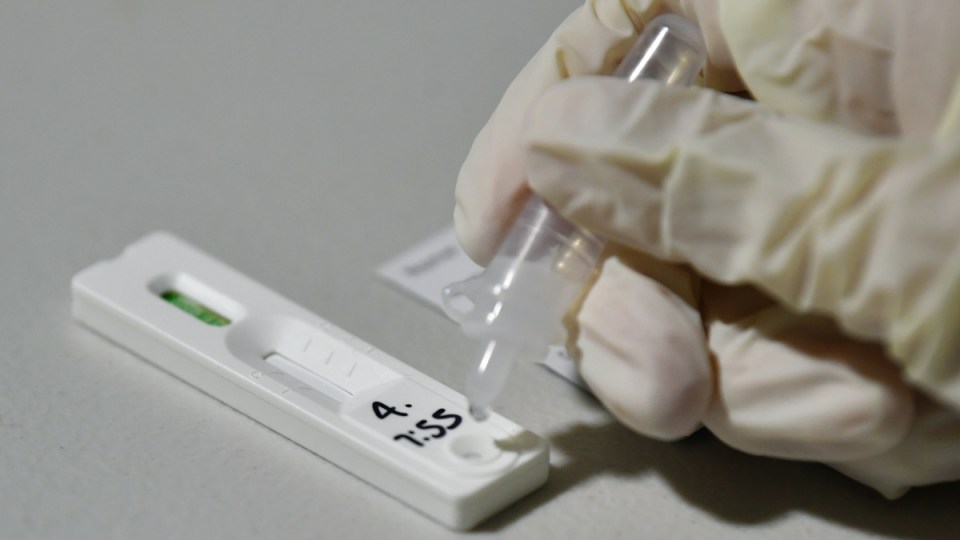 Rapid COVID test kits – which promise results within minutes – will be sold at Coles and Woolworths supermarkets across Australia from next week.

But unlike in Britain, where the tests are available free from pharmacies and health clinics, the federal government has ruled out supplying Australians with the kits for no charge.

It comes as the federal government approves COVID booster shots for all Australians over 18, while – in another major vaccine development on Wednesday – vaccines for children as young as five could get the OK within weeks.

The Therapeutic Goods Administration gave a tick to three brands of rapid antigen tests a fortnight ago, paving the way for Australians to begin self-administering COVID screenings at home.

On Wednesday, Woolworths said it would sell kits in “selected stores” from early November. Coles will sell the tests in all states except South Australia and Western Australia.

Rapid tests are also expected to be available at pharmacies and convenience stores.

Rapid antigen tests are much faster and less invasive than a standard polymerase chain reaction (PCR) test – returning results within 15 minutes. But they are slightly less accurate.

They require oral fluid or saliva, or a nasal swab, to be added to a tube of solution and then applied to a test strip. A positive result would need to be followed by a formal PCR test to confirm.

Countries such as Britain have made the tests free to encourage use. But Health Minister Greg Hunt said that, while free rapid tests were available for critical workforces such as healthcare, the federal government had no plans to distribute them freely to the general population.

“We’re making it generally available and we’ll let that market develop,” he told The New Daily at a Parliament House press conference.

Mr Hunt also announced that the TGA had ticked off on using the Pfizer vaccine for COVID booster shots. While the government is still awaiting formal advice from its Technical Advisory Group on Immunisation (ATAGI), the TGA has recommended people seek a booster six months after their second vaccine dose.

Pfizer boosters have been approved for everyone over 18. They will be available to all Australians, regardless of which vaccine brand they had for their first two shots.

“It’s a universal booster, so it’s available for people who have had Pfizer, AstraZeneca or Moderna,” Mr Hunt said.

“This is an important step and it will mean that Australia will be one of the most highly vaccinated societies in the world … One of the first to receive a whole population booster program.”

Booster shots are expected to be available from November 8. Mr Hunt said he expected that by January about 1.6 million people would be eligible for boosters, following six months after their second dose.

He said the government had set no targets for booster numbers, but Australia has contracted more than 151 million doses of vaccines – including 60 million Pfizer in 2022 – for its booster program in the next two years.

Moderna is also expected to apply for its vaccine to be used as boosters.

TGA head John Skerritt revealed at the press conference that Pfizer had begun submitting applications to Australian authorities to give COVID shots to children as young as five. It follows American authorities progressing their approval of Pfizer for children.

Currently, Australia has approved the Pfizer and Moderna vaccines only for those aged 12 and up.

Professor Skerritt said he expected the Pfizer paperwork to be assessed in coming weeks. He said regulators would “dig even deeper” in their safety analysis of the vaccine, before extending its use to children.

“I’d hope that we get there by the end of November but it depends on to get the full application from Pfizer,” he said.

Professor Skerritt said the TGA was also anticipating receiving an applications for the Novavax vaccine – of which Australia has ordered 51 million doses – within the next two weeks.

Novavax is also expected to be used as a booster shot, if approved.

Mr Hunt said the fully vaccinated rate across the country had increased to 74.8 per cent, while 87.4 per cent of over-16s have had a first dose.

Rapid COVID tests in supermarkets, booster shots and vaccines for kids within weeks