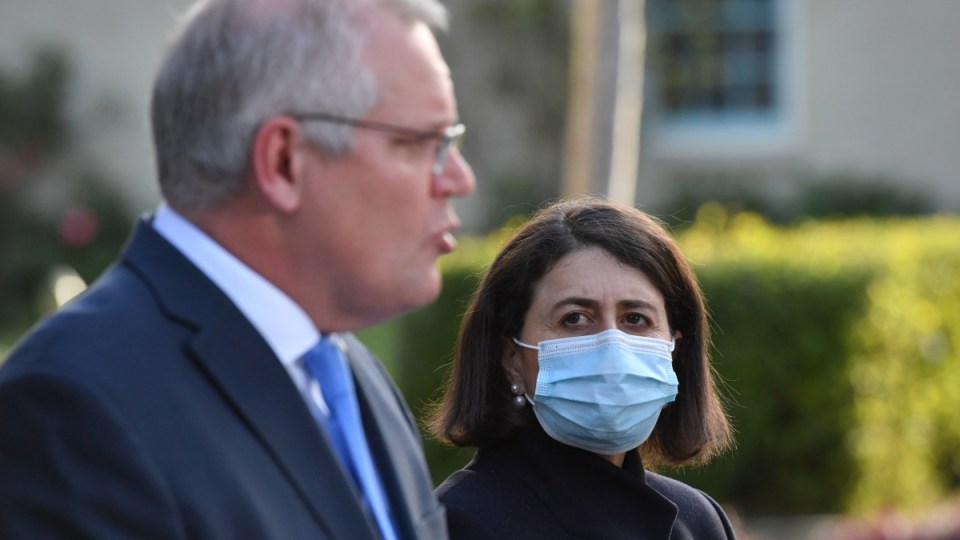 Gladys Berejiklian’s shock exit likely makes his path even narrower and rockier, because in this election the Prime Minister won’t just be campaigning against Anthony Albanese.

He’ll be campaigning against popular and punchy Labor premiers – and potentially dodging their travel restrictions – who are set to play a more important role than ever on the federal electoral stage.

With an election able to be called any time between now and May, Mr Morrison is already setting up his campaign as a referendum on his “safe reopening plan”.

He’s recently switched back to “hope” and “light at the end of the tunnel” messaging, talking up freedoms Australians (read: NSW residents) are about to get back under the national plan.

It was even skewered in a Betoota Advocate headline, the satirical paper ‘reporting’ Mr Morrison “jumped at the chance to take credit for New South Wales’ imminent freedom day” in a press conference on Thursday.

Mr Albanese is talking up Labor’s post-pandemic “reconstruction” plans, an Australian-themed version of “build back better” slogans being rolled out in election campaigns worldwide.

Whenever it’s held, between now and May, will be in the midst of Australia’s wider reopening from COVID-19; the campaign themes for both sides will be pandemic, pandemic and pandemic.

But even structurally and logistically, this election will revolve around the pandemic.

Let’s think about the mechanics of an election campaign – leaders, buses, travelling, planes.

Western Australia’s Mark McGowan, Queensland’s Annastacia Palaszczuk and Tasmania’s Peter Gutwein have shied away from giving any indication as to when they’ll reopen their borders to states with high COVID rates.

That could stifle the travel plans of Mr Morrison and Mr Albanese, who are both based in Sydney.

Mr Morrison, asked about the situation on Perth’s 6PR this week, laughed it off: “It’s not really up to me, is it?”

“That’s up to the WA Premier as to whether he opens the borders or not, to anyone from the eastern states.”

Maybe by election day, those borders are open.

But imagine a situation where Mr Albanese and Mr Morrison are confined to only a few states of travel – NSW, Victoria and the Australian Capital Territory, maybe South Australia.

It’d be unprecedented for a federal election where leaders criss-cross two or three cities a day, blitzing local media and revving up the troops.

Of course, prominent MPs in each state could be deputised; Peter Dutton and Jim Chalmers as the Queensland ‘captains’, for instance.

But think about how state premiers, some elevated from semi-obscurity into titan status through the pandemic, could be used as battleground heavyweights?

Daniel Andrews, Mr McGowan and Ms Palaszczuk, in particular, are rock stars in their home states.

Premiers don’t often inject themselves heavily into federal campaigns, but you’d be brave to think state leaders wouldn’t take a far greater prominence this time around, perhaps campaigning where the federal leader cannot.

Which is why Ms Berejiklian’s abrupt resignation is a significant ding to Mr Morrison’s plans.

That leaves three Labor leaders for Mr Albanese to tap during the campaign, hoping the magic dust of their popularity rubs off on him.

Imagine Mr Andrews whipping up votes in Victoria while Mr Albanese campaigns through NSW, or joins Mr McGowan and Ms Palaszczuk at rallies in their capital cities.

Imagine a premier keeping the border shut to Mr Morrison, while campaigning for Mr Albanese.

Having three extra queen pieces on the chessboard, powerful allies to do some of the heavy lifting, is nothing but an advantage.

Of course, Australians vote and think differently about state governments and federal governments.

There are Labor governments in the majority of jurisdictions – WA, Qld, Victoria and ACT – but a Coalition government federally.

Ms Palaszczuk holds power in Queensland, but the Coalition holds a big majority of its federal seats.

But that’s the pre-COVID wisdom; political truisms from a time before every Australian knew what a chief health officer was, or watched their press conferences with such intensity they could anticipate what announcement was coming simply from the outfit their state leader wore.

Think about how much a premier’s endorsement could change the game this time.

So if premiers are the potential trump cards of this election, where does that leave Mr Morrison?

Suddenly without his ace in the hole.

It’s no secret Ms Berejiklian and Mr Morrison were not the best of friends.

Despite the PM praising the former NSW premier as a “dear friend” last week, stories abounded in recent months of their frosty relationship; that his office backgrounded journalists against her, that she called him an “evil bully”.

But in NSW, on the cusp of reopening after months of crushing lockdown, Ms Berejiklian was a popular force and would have been a powerful campaign asset.

With three Labor premiers in play as Albanese allies, there’s no doubt she could have mustered troops in NSW, the key to any hope Mr Morrison has of victory.

Instead, her sudden demise leaves Mr Morrison looking at Dominic Perrottet; an unknown quantity for many in NSW, whose best-known characteristics are his Christianity and his youth.

His most prominent entry into the federal political sphere this year were reports that Mr Morrison called him a “f—wit” during a video call.

He doesn’t yet have exactly the kind of national popular appeal the Labor premiers could provide.

Mr Perrottet has now hit the accelerator on his state’s reopening plan, pushing for a faster return to normal.

Considering Mr Morrison’s election plans run through NSW, and his entire election pitch so far seems to be on a “safe” reopening, the PM will be sweating on how that plan turns out.

State premiers could be the trump card this election. Morrison just lost his ace in the hole