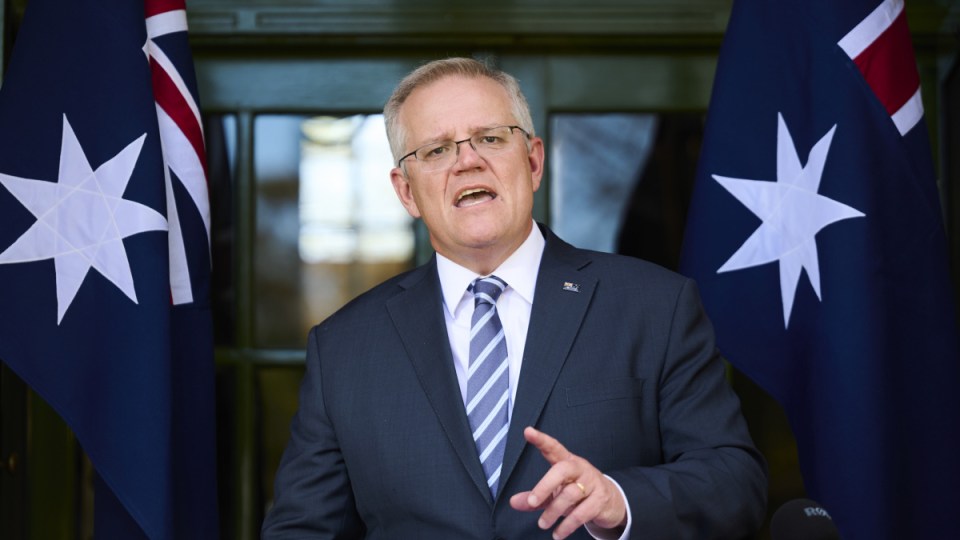 Mr Morrison spoke from The Lodge in Canberra, where he remains in quarantine after returning from the US. Photo: Getty

Prime Minister Scott Morrison has hailed NSW’s rebooted roadmap to hasten the return of freedoms, saying residents are “beginning to get their lives back” thanks to vaccination rates.

“I want this to be a sign of hope to the rest of the country,” Mr Morrison said on Thursday.

He had particular praise for GPs and pharmacists, who have delivered the lion’s share of millions of vaccines across NSW.

“Australians are beginning to get their lives back. The things that have been taken from them, because of this awful pandemic – the ability of Australians to come together, Australians to spend time with one another, to do business, to be together with family, to go to weddings, to go to funerals – all of these times so precious,” Mr Morrison said.

“And these times are now being restored.”

Under a dramatic shake-up of NSW’s post-lockdown plans unveiled by new Premier Dominic Perrottet on Thursday, more people will be allowed to gather indoors and outdoors while weddings and funerals can double in size.

Thursday’s boost came as NSW confirmed 587 more local COVID infections and eight deaths in the 24 hours to 8pm on Wednesday.

The toll for the current outbreak is 403.

Mr Perrottet and the state’s crisis cabinet met late on Wednesday to tweak the roadmap as the state prepares to emerge from months of lockdown on Monday.

For weddings and funerals, 100 people can attend.

NSW indoor swimming pools will also be able to open for lessons, training and rehabilitation activities.

Restrictions will ease further when 80 per cent of the adult population is fully jabbed, expected around October 25.

That’s when 3000 people will be allowed at ticketed outdoor events and nightclubs can reopen, but without dancing.

Masks also won’t be required in office buildings in an attempt to encourage workers back to Sydney’s CBD.

These freedoms will apply only for the fully vaccinated until December 1, when they will also be restored to the unvaccinated.

Meanwhile, all school students will return to on-site learning by October 25, a week sooner than the prior plan. Kindergarten, year one and year 12 students return on October 18.

Teachers will continue to wear masks in the classroom.

“Vaccination is the key to our freedom and the sacrifices and the effort of people right across NSW have ensured that we can open up as quickly and safely as possible,” Mr Perrottet said.

“This is not just a health crisis, it’s an economic crisis.

“The system we have is based on vaccination rates as it has to be, because we want to open up in a measured and safe way.”

Greater Sydney will emerge from 15 weeks of lockdown on Monday when gyms, cafes, restaurants, shops, hairdressers and beauticians reopen and people will be allowed to venture more than five kilometres from their home.

But the Australian Medical Association NSW has warned against moving too quickly, saying healthcare workers would be burned out if hospitals are overwhelmed by virus cases.

In the meantime, NSW residents have been told to use the Medicare app to show proof of vaccination.

“If businesses open, what they will say to unvaccinated people who come into their place of business? What procedure will there be for their staff, their customers?” Mr Minns said.

“These procedures should have been in place before today.”

Elsewhere, lockdown will be extended until Monday for several areas in COVID-affected regional NSW including Oberon, Snowy Monaro and Menindee and Sunset Strip.

Transport for NSW also said it would next week re-establish Monday-to-Friday timetables at 50 per cent COVID-safe capacity.

There are 911 COVID-19 patients in hospital in NSW, with 181 in intensive care units and 85 on ventilators.