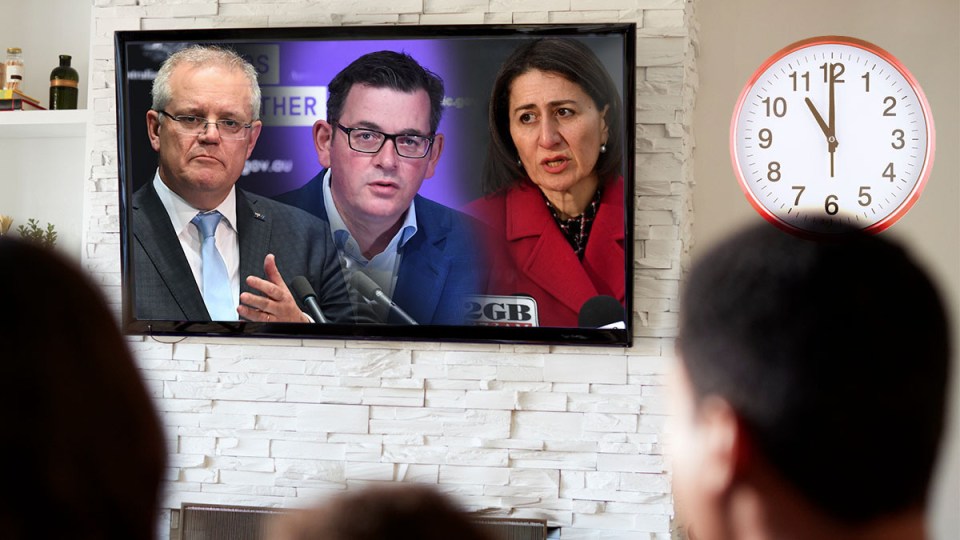 Catching up with the 11 o'clockers. Photo: TND

The normally quiet 11am time slot is suddenly the hottest TV real estate in the land, with two, three or even four of the nation’s political leaders regularly calling important press conferences for that exact time.

But why 11am? And why do they keep scheduling public appearances at the same time?

“The offices of the Premiers and PM operate in their own universes, each with their own press galleries,” Tony Story, former adviser to then-NSW Premier Mike Baird, told The New Daily.

“They simply won’t see it as their job to co-ordinate timings to provide back-to-back press conference binges for the pundits.”

With Australia’s COVID-19 situation changing day by day, and officials tinkering with rules on a regular basis, press conferences have morphed from channel-changing bores to must-see viewing.

No longer watched only by journalists and avid #Auspol tweeters on TV news channels, political pressers are now streamed live on the Facebook pages and websites of the country’s biggest media outlets, countless Australians hanging on each word.

The Australian reported this week that one million Melburnians tuned in to watch Mr Andrews’ press conference last week to announce Stage 4 lockdowns – reporting that “Melbourne daytime ratings haven’t been this good since Ray Martin’s Midday Show in the 1980s.”

Here's the cheat sheet for the Dan Andrews presser:

Indeed, people are suddenly watching so many hours of straight, unfiltered press conferences they’re noticing patterns in the timing.

But a curious trend has emerged where multiple state leaders keep scheduling their press conferences for the exact same time – 11am.

On many occasions in recent weeks and months, Gladys Berejiklian and Mr Andrews have both called press conferences for 11am, while Scott Morrison and Annastacia Palaszczuk also regularly hold their own at this precise time.

Gladys Berejiklian, Daniel Andrews and Scott Morrison deciding to do an 11am press conference pic.twitter.com/sCIlWHBbsN

Of course, most only need information from their own state, but with the current Victorian outbreak of intense national concern, many people want more.

If you’re a Sydney resident, for example, you’ve often got a three-way choice at 11am – watch a national update, or the most imminently critical update to you personally, or the latest grim update from Victoria.

So … why do they keep being held at exactly the same time?

“Despite the punditry’s natural desire to see the politics in everything, there is often simply a practical explanation,” Mr Story explained.

Official health department COVID figures are collated daily, and it’s not until early morning that leaders can get information briefings to then pass on to their constituents.

With heightened attention on transparency and timeliness of important public health warnings, leaders are mindful they need to get the latest data out quickly.

With the PM and the premiers of NSW, Victoria and Queensland all on the same east coast time zone, it’s a quirk – but not surprising – they keep crossing over.

Even with all the leaders reportedly on the same WhatsApp group text, Mr Story expected the clash of timing wasn’t front of mind.

“They’ll schedule for when it suits their office. And it is no real surprise that those timings end up being similar,” he said.

Although, sometimes it can change – for instance, on Monday, when Ms Berejiklian, Mr Andrews and Mr Morrison all scheduled appearances at 11am, before the PM brought his forward to 10.45am to avoid clashing.

Jenna Price, a journalist and media academic at the University of Technology Sydney, said while reporters grumble at timing clashes, leaders were speaking beyond the media class.

“I can understand why premiers want to go at the same time. They’re speaking to their audience who needs to know the latest news, not just journalists,” she told The New Daily.

Several federal parliamentary press secretaries told The New Daily the rush to be ‘first’ also has a more political element.

By going first, a leader can’t be drawn into commentary on decisions or news from other states not yet revealed – and interstate rivalry probably doesn’t help sharing the time slot.

So that answers why they perhaps don’t co-ordinate timings, or really much be bothered by sharing the timeslot with another leader.

But why 11am, specifically?

Other federal press secretaries said 11am was a kind of ‘sweet spot’ time slot for maximum exposure.

It’s during the tail end of commercial TV morning shows, allowing for programmers to “break in” to show press conferences live, but early enough for announcements to make noon news bulletins.

Many news websites also update their homepages around lunch, when workers will check their phones for news alerts and email newsletters.

“I don’t think it’s an accident. They’ve discovered when constituents are watching and listening, and when media outlets are going to update their sites,” Ms Price said.

Why do all the politicians keep doing press conferences at the same time?