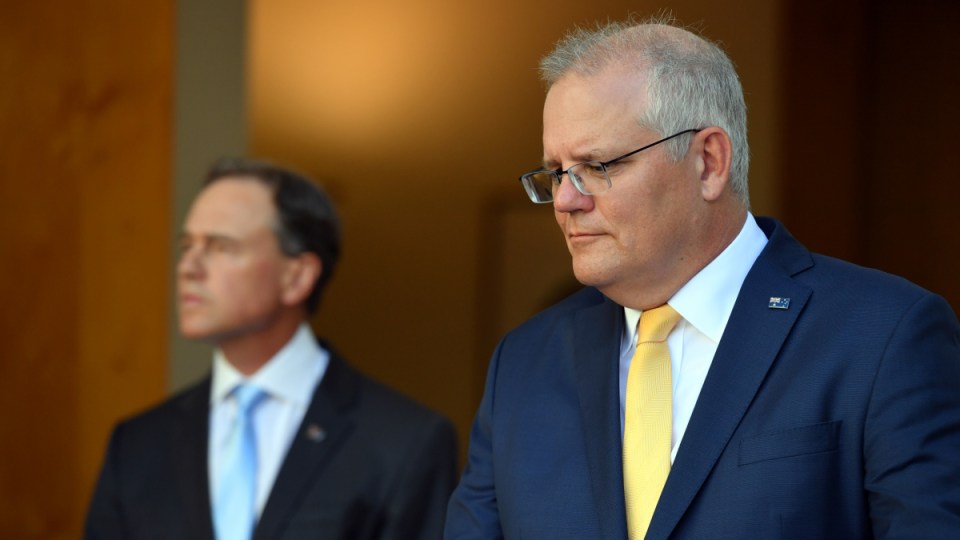 The Victorian government has pointed the finger at the federal government Photo: AAP

Victoria’s Acting Premier has firmly placed Thursday’s COVID lockdown at the federal government’s feet, saying vaccination rollouts are “slower than we’d hoped” and hinting lockdown rules might have been different if more people were protected.

“There’s only one path to defeating this pandemic, and that’s the successful rollout of the Commonwealth’s vaccine program and an alternative to hotel quarantine,” James Merlino said in announcing the “circuit-breaker” shutdown on Thursday.

“We’re stepping up where we can … but this is the Commonwealth’s vaccine program.”

Unions are already calling for the Morrison government to reinstate JobKeeper wage subsidies for businesses affected by Victoria’s seven-day shutdown, which begins at midnight Thursday. The federal Greens were quick label it “the Morrison lockdown”.

More than 3.9 million doses of COVID vaccine have been administered in Australia – including 111,000 on Wednesday – but just 2 per cent of the population has had the required two doses.

The federal government revealed on Wednesday that while 85 per cent of aged care residents had received at least one dose, there were still 29 homes in Victoria alone where people had received none.

Acting Vic Premier James Merlino says #MelbourneLockdown could have been prevented "if we had an alternative to hotel (quarantine) for this particular variant of concern. If we had the Commonwealth's vaccine program effectively rolled out, we may not be here." #Auspol @SBSNews pic.twitter.com/Ue4IKAk8Qv

Outlining Victoria’s response to its worsening COVID outbreak, Mr Merlino said: “If more people were vaccinated, we might be facing a different set of circumstances. Sadly, we’re not.”

“We should be at a much higher levels… These are supply issues the Commonwealth is responsible for, securing, procuring, and then delivering the supply, so that’s been one of problems.”

Later on Thursday, Prime Minister Scott Morrison responded, saying “it’s hard to reconcile that with international experience”, claiming other countries that had rolled out vaccines still had virus restrictions.

“But this is a further reminder to Australians about the importance of getting vaccinated. I am pleased that we are now over 100,000 who were vaccinated yesterday, and we want to see that continue,” the PM said.

Mr Morrison said “every support is being provided to the Victorian government that they have sought”, noting 130,000 extra vaccines pledged on Wednesday. He did not outline specifically what other help was on the way.

The government will temporarily suspend mutual obligations requirements for Centrelink recipients until June 7.

Health Minister Greg Hunt said that, of the 29 Victorian aged-care homes that were yet to receive a single dose of COVID vaccines, all would be visited for a first dose clinic by the weekend.

“This could have been avoided,” he said.

But the Australian Council of Trade Unions also wants the federal government to step up.

“A lockdown with no support for jobs … means many workers face an uncertain future with no guaranteed connection to work,” ACTU president Michele O’Neil said.

“People will lose work during this lockdown thanks to the federal government’s decision to completely end JobKeeper early … The Morrison government must re-instate JobKeeper where it is still needed.”

Ms O’Neil noted Victoria’s week-long lockdown would be “the first to extend beyond a weekend” since JobKeeper ended.

Mr Hunt said on Wednesday night that the federal government would “provide further support as required to help Victoria”. The New Daily has contacted the Prime Minister’s office to see if any further support will be available.

Today’s announcement of another lockdown is difficult for Victorians.

We have got through this before & we will do so again.

Please continue to follow the medical advice & if eligible to get vaccinated, I strongly encourage you to do so.

Stay safe & look out for one another. pic.twitter.com/LQ0fXYp0lr

Treasurer Josh Frydenberg, member for the Melbourne seat of Kooyong, tweeted a video during Mr Merlino’s lockdown announcement. He told Victorians “we have got through this before & we will do so again”, and encouraged people to get vaccinated.

Mr Frydenberg said the federal government “will continue to stand with Victorians” but did not detail immediately whether further financial support would come from Canberra.

Greens leader Adam Bandt, the member for Melbourne, slammed the federal government after the lockdown announcement. He blamed Mr Morrison’s government for issues with vaccine rollout and quarantine leaks.

“This is the Morrison lockdown,” he tweeted.