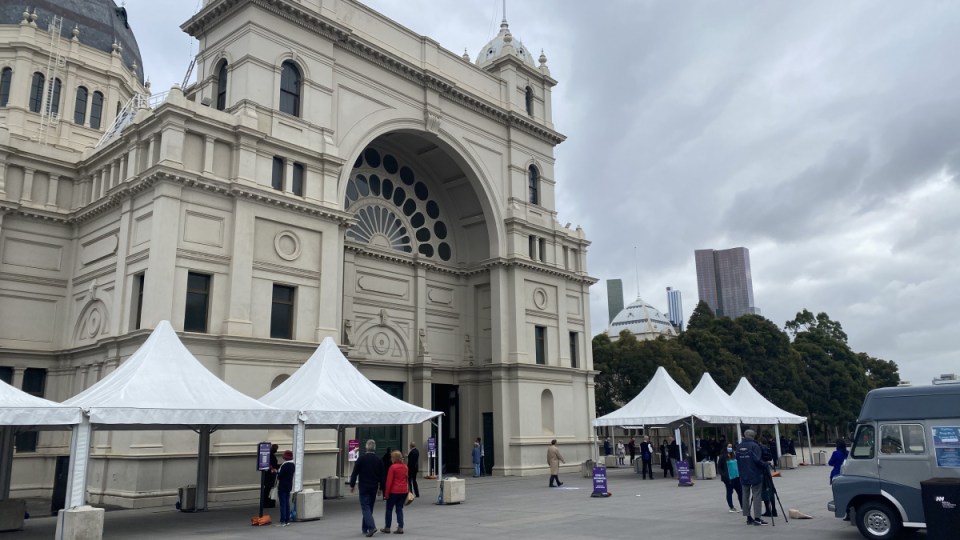 Under-50s were turned away from mass vaccination sites on Wednesday. Photo: TND

Medical experts are urging all eligible Australians to get the coronavirus vaccine, as frustrated under-50s jostle to be given the jab.

Brendan Crabb, an infectious diseases researcher and director and CEO of the Burnet Institute in Melbourne, has pleaded for the federal government to open access to AstraZeneca for under-50s who want it.

“We are without doubt at very real risk of incursion of the virus. The current situation in Victoria is a clear example for everybody to see.”

He said the Therapeutic Goods Administration’s advice against AstraZeneca for under-50s was risk averse, but should be continuously reviewed.

“[The blood clots] are much better understood now. They are getting detected and managed earlier. The severity is being reduced,” Professor Crabb said.

“The benefits of under-50s getting vaccinated seem to far outweigh the negatives.”

Multiple countries – including Taiwan, South Korea and Singapore – have proved how a country can quickly go from being a safe haven to experiencing a crippling new wave.

Australians were told they would “lead the pack” in terms of vaccine rollout, but the country has quickly fallen behind on the global stage.

Experts say the slow pace is threatening to derail public confidence in the vaccines.

Some over-50s are now holding out on getting the jab, believing Pfizer or Moderna shots are better than AstraZeneca.

‘Everyone needs to do their bit’

Professor Crabb said the message was clear – if you’re eligible to get a vaccine now, don’t wait.

“Individuals need to do their bit,” Professor Crabb said.

“You have to step up, for yourself, your family, your community. They are precious gifts, these vaccines. Understand and approach it with that attitude.”

Across the country, younger Australians have been fronting up to vaccination hubs to try and sign up for unwanted AstraZeneca shots.

But on Wednesday in Victoria, many were turned away.

Madeleine, a frontline worker in her 30s, knows of ‘ineligible’ peers who have received the jab just by turning up, so thought she would try her luck.

“I am aware of the risks associated with the AstraZeneca vaccine,” Madeleine told TND.

“Everything we put into our bodies carries a level of risk. I weighed up the risk of clotting from the vaccine with the risk of getting COVID. I decided I’d rather chance it with the vaccine.”

However, she was turned away when she told officials she did not fit the current Phase 1a or 1b rollout requirements.

Although upset and frustrated at the lagging rollout, she stressed she didn’t blame older Australians for being hesitant about being vaccinated.

“The real problem here is a lack of targeted health promotion to allay these concerns and right-wing media spreading misinformation,” Madeleine said.

“The mutations of COVID-19 have caused death rates among younger people to increase and the long-term health impacts for those who survive can be debilitating.”

TND visited several vaccination sites across Melbourne on Wednesday, and was given conflicting information.

Authorities at one site said AstraZeneca wouldn’t be given to anyone who was not yet eligible.

At another site, TND was told anyone who arrived early enough or called ahead to book in would be able to receive it – eligible or not.

Australian Medical Association deputy president Chris Moy said if under-50s understood the risk, they should be able to have the AstraZeneca vaccine.

“It’s not so much a matter that we’re advising people to do it. It’s about people having the choice,” Dr Moy said.

Initial experience in the first three months of vaccination in Europe (including the UK) suggests blood clotting occurs in about every four to six people out of one million, the TGA website states.

It appears to be less likely in older adults than younger adults, but remains very rare in the latter cohort.

Dr Moy said AstraZeneca had been given a bad name, but all coronavirus vaccines helped to keep communities safe.

“AstraZeneca might turn out to be the one that saves us all,” Dr Moy said.

“We’re still early in the life cycle of the vaccine. All that efficacy stuff is still up for grabs.

“Either [Pfizer and AstraZeneca] are good at stopping the virus. You stop yourself dying and there is increasing evidence it reduces transmission rates.”

The battle to have every Australian vaccinated needs to be framed like a war, where you wouldn’t wait for backup if it was on your doorstep, Dr Moy said,

“You’re not going to wait around for reinforcements – which may be slightly better – while (the enemy) is in front of you. It’s crazy thinking,” he said.

Health Minister Greg Hunt and Department of Health secretary Brendan Murphy have routinely urged Australians to be “patient” when it comes to the rollout.

But Mary-Louise McLaws, an infectious diseases expert at the University of New South Wales and member of the World Health Organisation’s COVID-19 response team, said while we wait for the extra doses of Pfizer to arrive later in the year, we need to fix hotel quarantine.

“This cluster would not have happened had that poor man from South Australia, who went to Melbourne, been tested on day 14,” Professor McLaws told TND.

She has long advocated for better practices in the hotels, including enhanced ventilation, more testing and better separation of guests who test positive.

Much of the issue is that the states can’t afford to build and run such facilities themselves, she said.

“This very outbreak and many others have come from 24 breaches of hotel quarantine,” she said.

“The belligerence of the authorities to say they are doing a good job is mind-boggling.”