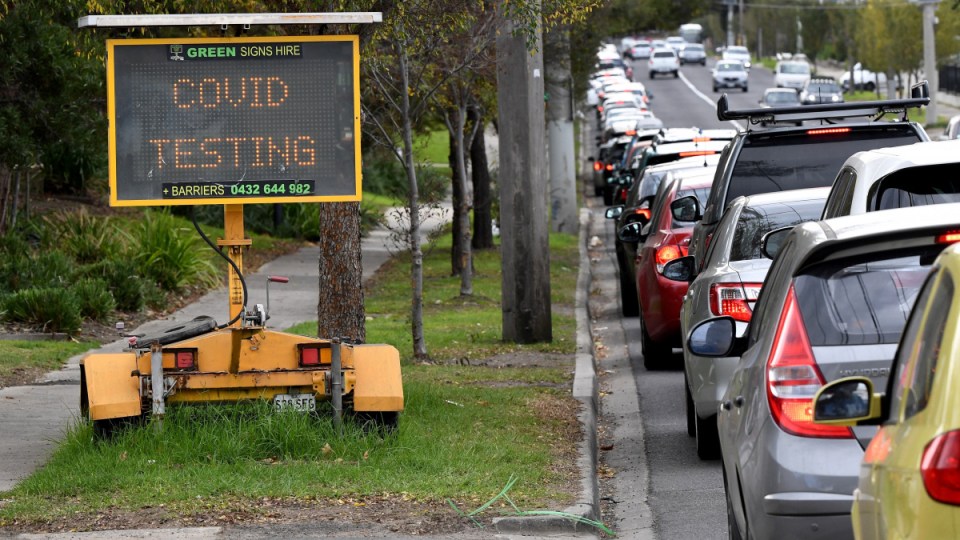 There have been long queues at COVID testing centres across Melbourne this week. Photo: Getty

Six new cases were confirmed on Wednesday in the cluster that began in the city’s north – five from overnight and one just minutes before a government briefing began on Wednesday morning.

All are linked, but – for the first time – infections have spread beyond family households in Melbourne’s north.

Acting Victorian Premier James Merlino said authorities were concerned about the kind of sites the virus was spreading into, including workplaces across the city.

“I want to be upfront with everyone this morning. I cannot rule out taking further action,” he said.

“We will update everyone when we know but it’s fair to say the next 24 hours are going to be critical.

“We are concerned about the number and also the kind of exposure sites.”

The number of exposure sites also grew on Wednesday, with the Three Monkeys Bar on Chapel Street, in popular night spot Prahran in inner-Melbourne, a building at RMIT University’s city campus and seats in the MCG’s Great Southern Stand all added to the list.

Chief health officer Brett Sutton said he was concerned that some of the infected people had been active the community for days before diagnosis.

“It is clear that we have run down multiple generations of transmission in the past 48 hours. That has been extraordinary work,” he said.

“But there has been a lot of chasing to be done because we have had those individuals out in the community for some days in the past, so there are potential exposures there that relate to some days ago.”

Earlier, thousands of AFL fans who attended last Sunday’s AFL match between Collingwood and Port Adelaide at the MCG were ordered to have COVID-19 tests after one of the infected people went to the game. They were seated in Zone 4, Level 1 of the Great Southern Stand at the Punt Road end.

Late on Tuesday night, Victorian health authorities sent text messages to supporters seated in the vicinity of the positive case classifying them as close contacts and advising them to get tested.

Others attending the match were asked to check for symptoms and get tested if any develop.

With new COVID restrictions already imposed in Melbourne this week, there has been some doubt about crowds at this weekend’s scheduled matches.

Victorian Sports Minister Martin Pakula said ahead of the official briefing on Wednesday that it was likely crowds would be allowed at the MCG and Marvel Stadiums, with extra rules for masks. It is also likely the roof at Marvel will be open.

Mr Merlino said that remained “correct in terms of where we are by now”.

“This is just like the settings that we announced yesterday … this is subject to how we go over the next 24 hours,” he said.

Marvel Stadium will host a top-of-the-table clash between Melbourne and the Western Bulldogs on Friday night.

Bulldogs players and staff were all tested, and cleared, of having COVID-19 on Tuesday after being linked to the widening outbreak.

Testing sites have also been overwhelmed across Melbourne as the outbreak has spread. Wednesday’s virus results came from more than 26,000 tests in Victoria.

State Health Minister Martin Foley said capacity had been boosted by 30 per cent across the testing network, particularly at some of the busiest sites, while new sites were being added.

“I do want to see another record of their today – we want to see very strong numbers of people showing up at those sites,” he said.

“The next 24 hours are critical and we will have more to say about that on the basis of advice following on from the further work of the detectives, but it is in the hands of Victorians. It is up to all of us, as a community, and we all need to do our part.”

Professor Sutton also urged anyone eligible to line up for a vaccine.

“We know many over 50s still have not had the vaccine and many will be booking now,” he said.

Genomic sequencing shows the outbreak is linked to the case of a Wollert man, who contracted the virus in South Australian quarantine earlier in May.

COVID-19 restrictions were ramped up in Melbourne on Tuesday and more could be on the way as authorities try to contain the outbreak that began in Whittlesea in the city’s north.

Residents of greater Melbourne are required to wear masks indoors while there are five-visitor limits for private gatherings, 30 for public gatherings.

Queensland, Western Australia and South Australia have significantly tightened their borders to Victoria while stopping short of slamming them shut for most travellers.