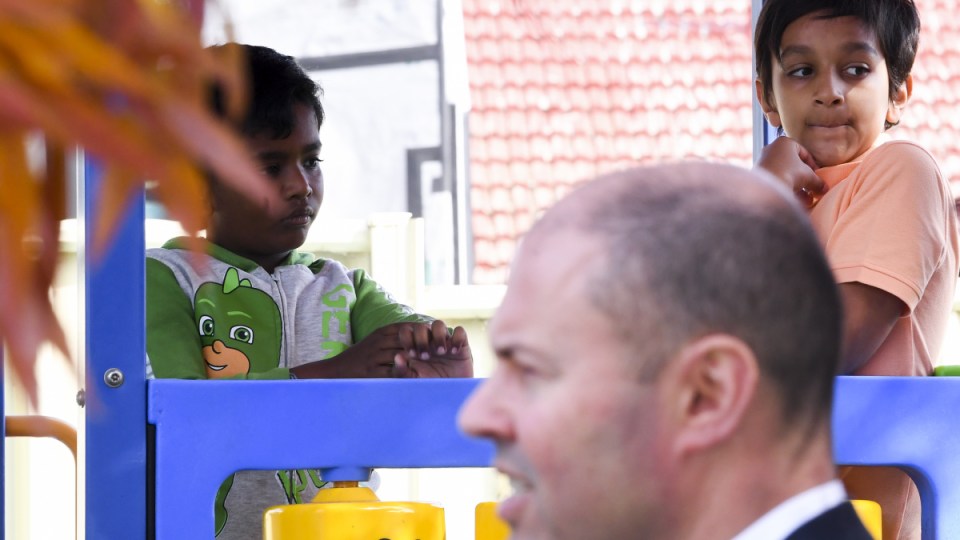 Child care has suddenly become the hottest policy game in town, with the federal government’s new women’s cabinet taskforce championing a splashy $1.7 billion announcement to be included in the budget.

But the Opposition has accused the government of not only missing an opportunity to help more parents struggling with rising fees, but also of copying their signature plan announced months ago.

“There is nothing there to regulate the costs that are at record highs under this government. This does nothing to move towards a universal, affordable childcare system,” Labor leader Anthony Albanese said.

Treasurer Josh Frydenberg maintains the government’s policy, which would increase subsidy payments for parents with two or more children in care, will help women get back into work and lower the gender pay gap.

“It opens the door for those choosing to work or to work more, which is critical to their own economic security and a prosperous Australian economy,” Minister for Women Marise Payne said.

Auspol tragics used to measure the gravity of Tony Abbott’s press conferences by how many Australian flags were placed in the background.

On Sunday, it was an unusual four-minister announcement where Mr Frydenberg, Senator Payne, Education Minister Alan Tudge and Women’s Economic Security Minister Jane Hume packed the yard of a Canberra childcare centre to detail the $1.7 billion policy, which had already been previewed to some news outlets.

Under proposed changes to the complex childcare system, parents would receive a higher subsidy payment for each subsequent child after their first to go into care.

A family earning $80,000 would have subsidies for their second child go from 82 per cent to 95 per cent, Mr Frydenberg’s office said.

The changes would come into effect in July 2022, 14 months away.

The policy means to “deliberately target low and middle income earners”, with benefits tapering as incomes increase. The government says 250,000 families would be better off.

Mr Frydenberg said the policy aimed to “lower the structural disincentive to take on an additional day or two of work”. Many families complain current structures mean if both parents worked more hours and put kids into care for more days, they would earn the same or less in overall pay.

Senator Payne said the policy was cooked up by the new taskforce, which aimed to eliminate “barriers” to women’s workforce participation.

“We know a lot of women … cited the cost of childcare is a reason why they had not returned to the workforce,” said mother-of-three Senator Hume, who called the cost “overwhelming”.

“Reducing the cost of child care and also reducing those disincentives to taking on more hours or more days, is the best way to encourage women to participate more fully.”

The Australian Council of Social Service called it “a welcome step”, but said the changes should come in earlier than 2022.

Labor claims the government’s policy, which mostly benefits families with multiple children in care, will see “hundreds of thousands of families” miss out.

The Opposition says their policy, announced last year, would benefit four times as many families as the government’s.

Labor would scrap the subsidy cap and lift subsidy rates for households earning up to $530,000, which they say would help 97 per cent of families.

“The government now acknowledges the problems that are there in the system, that when we announced our cheaper childcare policy in last year’s budget reply, they said didn’t exist,” Mr Albanese said.

The Opposition spent Sunday poking holes in the government’s policy, after having successfully dragged the issue into the mainstream by making it the centrepiece of Mr Albanese’s budget reply last October.

Mr Albanese and Labor have relentlessly sold their policy for months, staging countless photo ops at childcare centres and continually highlighting – through the coincidentally high number of Labor MPs with young kids – the importance of helping parents back to work.

Some Canberra observers and journalists raised their eyebrows in October, voicing wonder at why the Opposition staked its critical budget response on a policy that wouldn’t directly create jobs.

But the government’s promise to pour some $1.7 billion into the space – and in a major flashy budget commitment – shows Labor may have shrewdly identified a chink in the government’s armour, a gap in the political market.

In coming months, expect to see many photo ops at childcare centres as both major parties vie to win votes of parents groaning under the weight of mounting fees and a complex system.

The war to win the childcare vote, as Labor accuses the government of ‘imitation’