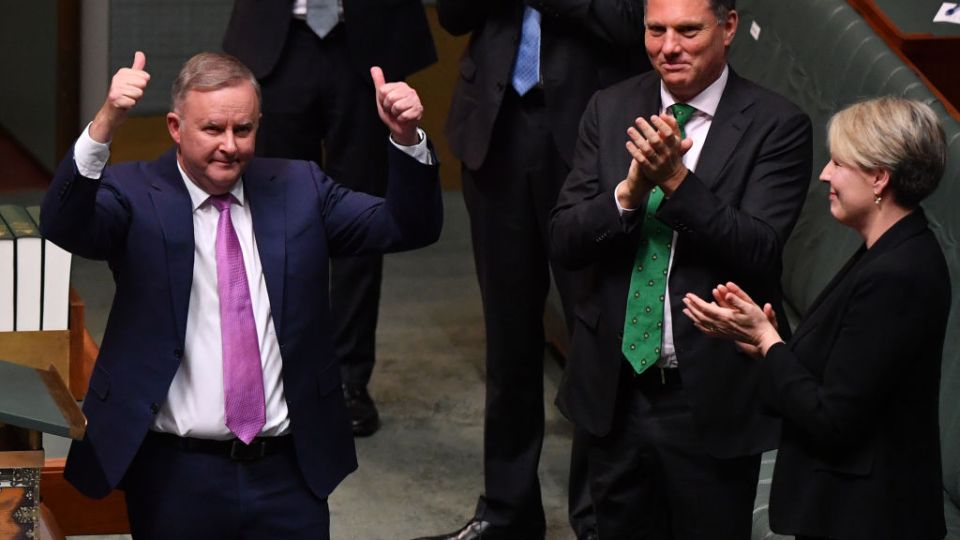 A Labor government would pour billions into childcare, Anthony Albanese has promised, with plans for “every Australian family” to get nearly their entire costs covered against “skyrocketing” fees.

In his first budget reply speech as Opposition Leader, Mr Albanese said Australia was at a crossroads, claiming the coronavirus pandemic presented “an opportunity to reset and renew”.

“This budget fails the test. The budget reflects the government’s character of being guided by short-term politics, not long-term vision,” he said of the Coalition’s budget plans.

In a clear play to regain some of Labor’s heartland voting bloc of working-class families and blue-collar workers, each of the tentpole announcements – on manufacturing, energy, housing and childcare – were pitched squarely at middle Australia.

“There was a time when the average wage let you buy a house,” he said.

“Before the balance tipped so far one way that ordinary people were left vulnerable. Let’s use this opportunity to get the balance right again.”

In his budget reply, Mr Albanese said Labor would remove the annual cap on the childcare subsidy, modernise the energy grid to better account for renewables, bolster support for manufacturing in the rail and defence industries, and boost social housing construction.

“Rehire our workers. Rewire our economy. Recharge workforce participation of women. And rebuild our nation,” he said of his plan.

After the Treasurer hands down their budget on the Tuesday night, the Opposition Leader traditionally gets a chance to reply on the Thursday, laying out an alternative vision for the country’s spending.

Labor has spent the past 48 hours hammering attacks against Josh Frydenberg and Scott Morrison, claiming vulnerable groups like women and older workers had been ignored by a lack of policies around childcare and employment support.

They keep saying this is the most important Budget in a century. And it is.

But the Budget was a missed opportunity that leaves people behind.

Tonight, I'll deliver Labor's plan for Australia – one where no one is held back, and no one is left behind. #BudgetReply

“Women have suffered most during the pandemic, but are reduced to a footnote,” Mr Albanese said.

“If you are over 35, you have certainly been left behind.”

The Labor leader proposed an ambitious childcare overhaul that would see every family have the bulk of their fees paid.

“Our long-term goal … is to investigate moving to a 90 per cent subsidy for childcare for every Australian family,” he said.

Mr Albanese said current settings and subsidies actively discourage parents from working, saying that boosting childcare would be a boost for national employment and productivity to the tune of $4 billion.

“A Labor government will, from 1 July, 2022, remove the annual cap on the Child Care Subsidy, eliminating once and for all, the disincentive to work more hours,” he said.

“We will increase the maximum childcare subsidy to 90 per cent, cutting costs for 97 per cent of all families in the system.”

Mr Albanese said this would mean families save between $600 and $2900 each year on fees, which he said were “skyrocketing” under current settings.

To boost job prospects for young workers, Mr Albanese said a Labor government would create an ‘Australian Skills Guarantee’, which would mandate that 10 per cent of employees on major work sites getting federal funding would have to be apprentices, trainees or cadets.

Labor would also look at how to extend a similar guarantee to other federally-funded sectors like childcare, aged care and disability services.

Mr Albanese said his party would create a manufacturing plan to boost the building of trains in Australia, while a ‘Defence Industry Development Strategy’ would create rules to ensure defence spending was allocated to maximise the amount of Australian materials and jobs.

Power has been the poison pill of Australian politics in the past decade, with energy and climate fights toppling several prime ministers.

Mr Albanese, in the third of his major speech announcements, said Labor’s ‘Rewiring The Nation’ policy would pour $20 billion into modernising the power grid and making it more useful for transmitting renewable energy.

He noted that the federal government “have had 22 energy policies in eight years”.

“We can be a renewable energy superpower, with clean energy powering a new era of metal manufacturing and hydrogen production,” he said.

“The current network takes no account of the rise of renewables as the cheapest new energy source, and doesn’t help link these new sources up to the national grid.”

Mr Albanese claimed the changes would deliver $40 billion in benefits and create “thousands” of jobs.

‘No one is left behind’

In ending his speech, he spoke optimistically about the pathway to recovery from the pandemic and its associated economic disaster, claiming there existed an opportunity to “make this once-in-a-century crisis the beginning of a new era of Australian prosperity and Australian fairness”.

“We can beat this recession, we can launch a recovery and we can build a future where no one is held back and no one is left behind,” he said.