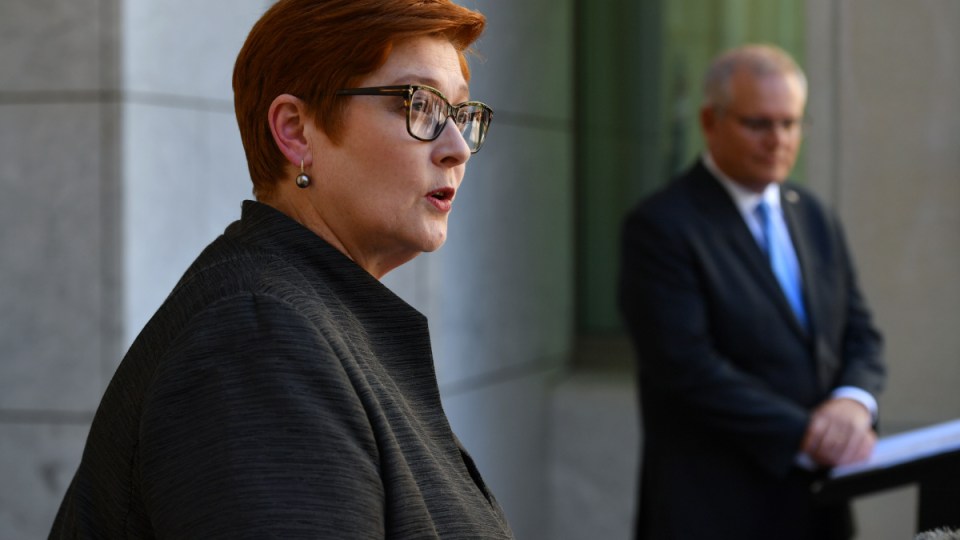 Scott Morrison’s new women’s cabinet taskforce will put inequality issues “at the centre of government”, its members promise, with a particular focus on the federal budget and bringing more “firepower” to tackling sexism.

But critics have expressed doubts over whether the unique sub-group in cabinet will help, and scorned Mr Morrison for joking Marise Payne should be known as the “Prime Minister for Women”.

Senator Payne, Minister for Women, and the PM will co-chair the new cabinet taskforce.

All women in the ministry plus Finance Minister Simon Birmingham, Treasurer Josh Frydenberg and Deputy PM Michael McCormack will join as members.

Senator Payne will be the “primary minister”.

“[The taskforce] puts addressing these issues at the centre of government,” Senator Payne said.

“It’s a very important and strong message to the Australian community.”

The changes to Mr Morrison’s ministry come amid a collapse in support among women for the government.

An Essential poll, released on Tuesday, showed approval for Mr Morrison plummeted from 65 per cent in February to just 49 per cent among female voters.

Labor took a 52-48 lead in Newspoll, up from 50-50, in mid-March as criticisms mounted on the Coalition amid escalating sexual misconduct scandals.

The New Daily understands the exact structures of the women’s taskforce, like how often it will meet and in what form, are still being locked in.

Senior government sources told TND the taskforce would have a major hand in federal budget preparation, as well as putting a “gender lens” on major policy areas and government initiatives.

“It’s about making sure the policies are aligned with where we want to go as a government,” one source said.

Elevating the taskforce into cabinet gives “more firepower” to action on gender and inequality, government sources said, adding the inclusion of key economic ministers Mr Frydenberg and Senator Birmingham would give the group sufficient resources.

“It’s bringing everyone into the room that you need,” they said.

One source said the taskforce would function in a similar way to the government’s expenditure review committee, or “razor gang”, the group of ministers who analyse and advise on budget priorities.

“It’s absolutely about putting these issues at the centre of government. This has never been done, to the best of my knowledge, in any government in Australia,” Senator Payne said, speaking on Monday.

Defence Industry Minister Melissa Price, elevated to cabinet in the reshuffle, challenged her colleagues on the taskforce to deliver.

“The time is for action,” she told Sky News on Tuesday.

“That’s what the women of Australia are demanding from us, and we will deliver on that.”

Ms Price, from the large rural Western Australian seat of Durack, said she hoped to bring a focus on “regional and rural women” to the meetings, with a particular interest in addressing “violence in the home, safety on the street”.

TND has been told Australia has not had an ‘assistant minister for women’.

Senator Stoker, the first person to hold that role, said the new taskforce and portfolios “reinforce the government’s commitment to achieve the results that Australians want for women”.

She cited the Respect@Work report, and prevention of domestic violence, among her priorities.

Calls for ‘action, not just words’

Not everyone was happy about the changes.

Former Liberal MP Julia Banks – who quit the party in the wake of the 2018 leadership spill against Malcolm Turnbull – tweeted criticism of Senator Stoker.

So much job description confusion today: the PM for Men appointed Amanda Stoker to the position of Asst Min for Women. The same woman who called it “ pathetic” & “bizarre” when other women Lib MPs and I called out the entrenched anti women culture in the party. 🤦🏻‍♀️ #auspol pic.twitter.com/mLj2NhzJ0n

Ms Banks later tweeted that she was “so glad I got out” of the Coalition, sharing a link to a news article about controversial Liberal Party vice-president Teena McQueen’s comments she “would kill to be sexually harassed”.

Senator Stoker has come under fire in the past for comments critical of “the transgender agenda”, and opposing a push to decriminalise abortion.

Labor’s spokesperson for women Tanya Plibersek said she hoped the taskforce would lead to “real action, not just words”.

“This is not a fight between the men and women of Australia. This is an argument between people who are sexist and people who don’t like sexism,” she said.