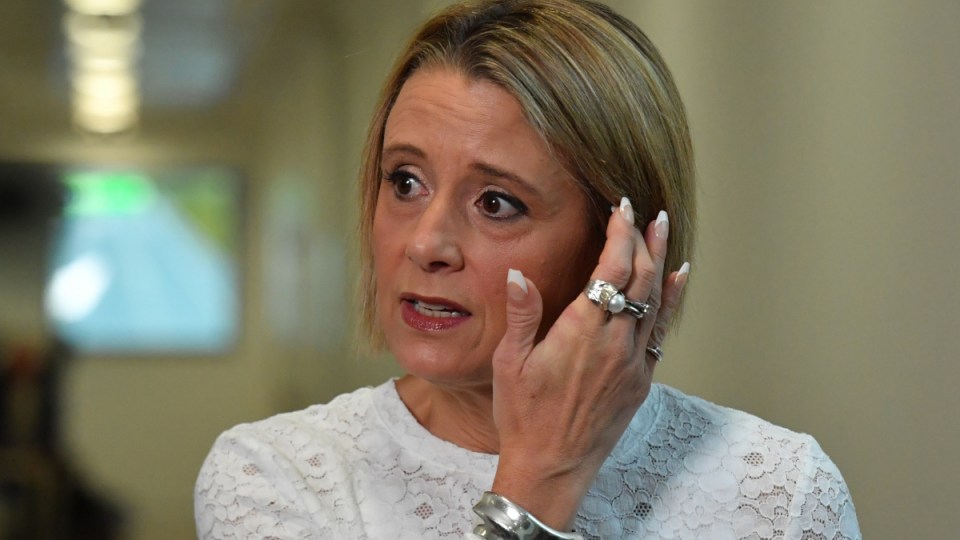 Labor’s Kristina Keneally was left “without words” after a government MP said she had sympathy for the Liberal staffer sacked after allegedly committing an obscene sex act on the desk of a female politician.

Reaction has been swift to the vile allegations aired on Channel 10 on Monday night, with finance minister Simon Birmingham admitting there was a “cultural problem” inside politics, and Coalition minister Karen Andrews saying she has had a “gutful” of mounting sexual assault and misconduct allegations.

But it was little-known Nationals backbencher Michelle Landry who stoked controversy early on Tuesday, after praising the man who allegedly committed an act of self-pleasure on the desk of his boss.

Moments later, Labor senator Kristina Keneally was giving a press conference of her own in the halls of the Parliament House press gallery.

She was asked about Ms Landry’s comments, but said she had not heard them, and a journalist read out a transcript to her.

“She said she feels bad for him because he loved working here? That’s what Michelle Landry said?” a stunned Senator Keneally answered.

Labor’s Kristina Keneally was just informed by journalists, mid-presser, about comments from Nationals MP Michelle Landry that she was “absolutely horrified” by the Channel 10 report but she she “feels bad for” the man sacked

On ABC’s Radio National, Senator Birmingham – whose finance department has oversight of parliamentary staff – flagged that the government was looking at whether to institute further mandatory cultural training for staff inside Parliament.

She also demanded the government urgently open an investigation into the reports, including that Coalition staffers had procured sex workers and brought them to the building “for the pleasure of Coalition MPs”.

Ms Andrews, the minister for science and industry, said she was disgusted by the “unacceptable” revelations on Channel 10, about staff employed by her own Coalition party.

“I have had an absolute gutful. My conscience will not allow me to remain quiet,” she said at her own press conference.

Ms Andrews said she welcomed the decision to sack one staffer immediately, but on the other three men reportedly involved in the secret Facebook Messenger group which shared the photos, she said “it’s time for you to leave the building”.

“We need to fix these issues here. I will not remain silent,” she said.

A number of Labor and Greens party staffers held a ‘strike’ inside the Parliament House prayer room on Tuesday morning, with the Channel 10 report “the last straw” for many after weeks of escalating misconduct and safety scandals. That room, according to the repoirt, is a location that MPs and staff have used for sex on Parliament premises.

Unvaccinated Pauline Hanson has COVID
‘Should have been a penalty’: Boy crash-tackled by PM gives his verdict
Russian Google to file for bankruptcy
Man arrested at NSW school for bestiality
Concern about COVID-19 deaths in aged care
Turkey blocks Finland, Sweden NATO talks
Senior Coalition minister has had a ‘gutful’ of misconduct
Today's Stories