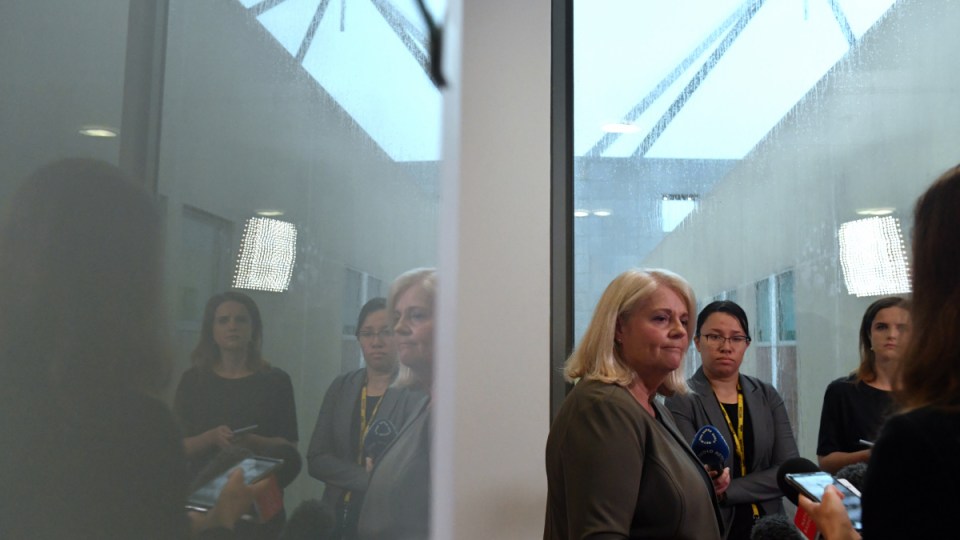 One of the most senior women in the Morrison government says she has had a “gutful” of “unacceptable” behaviour by coalition staff.

A staff member has been sacked after performing a lewd sex act inside a federal Liberal MP’s office.

Industry Minister Karen Andrews says other individuals involved in the scandal should stop hiding and leave.

“I have had an absolute gutful and my conscience will not allow me to remain quiet,” she told reporters in Canberra on Tuesday.

“There are some specific instances in this building that are absolutely unacceptable. What does it say about an individual that thinks that sort of behaviour is okay?”

However, assistant minister Michelle Landry says while the behaviour is unacceptable, she feels bad for the staff member who was sacked.

“The young fellow concerned was a good worker and he loved the place,” she told reporters outside Parliament House.

“I feel bad for him about this, but it’s unacceptable behaviour by anyone and it should not happen in workplaces like this.”

“How about feeling bad for the cleaners who had to come in and clean up after that disgusting mess?” she told reporters.

“How about feeling bad for a female MP whose desk was disrespected?”

Finance Minister Simon Birmingham, whose department manages much of Parliament House, said their conduct was revolting.

“Amongst a small number, there is clearly a disgusting and unacceptable culture, and we have to weed it out,” Senator Birmingham told the ABC.

“One employee was dismissed last night, and if others are identified as being engaged in similar activity, they will be dismissed as well.”

Prime Minister Scott Morrison has described the actions as “disgusting and sickening” and urged anybody with more information to come forward.

“The people who come to work in this building are better than this,” he said.

“The actions of these individuals show a staggering disrespect for the people who work in parliament, and for the ideals the parliament is supposed to represent.

“I will have more to say on this and the cultural issues we confront as a parliament in coming days.”

Senator Birmingham has contacted the journalist who reported the story and requested the whistleblower help the government identify the three other staffers allegedly involved.

“They’ve shown a complete disrespect for the member of parliament,” he said.

Minister for Women Marise Payne said the allegations highlighted the need for the independent inquiry into the workplace culture of Parliament House, headed by Sex Discrimination Commissioner Kate Jenkins.

“As a senator for NSW, as a minister in this government, and a human being, it’s appalling,” she said.

“The degrading nature of those actions, which were shown in the media, is beyond disappointing and reinforces the imperative of the review that the sex discrimination commissioner will carry out.”

Senior Coalition minister has had a ‘gutful’ of misconduct