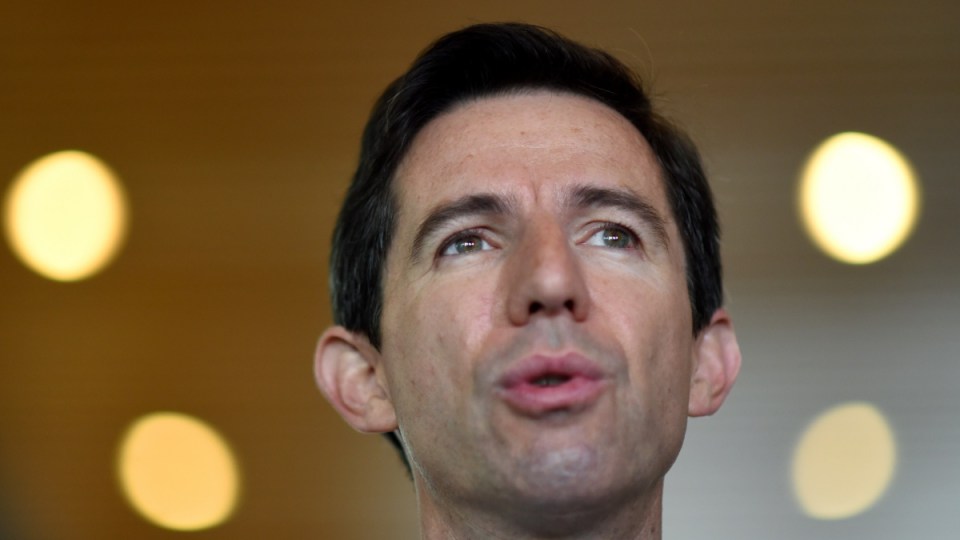 A Coalition staffer who reportedly carried out shocking sex acts inside Parliament House has been sacked, with Finance Minister Simon Birmingham launching an extraordinary attack on several other government employees involved.

Senator Birmingham said the employees should “pack their bags and leave the building for good”.

A staffer has already been sacked, The New Daily understands, terminated almost immediately after Channel 10 and The Australian published claims of shameful acts inside Parliament.

On Monday night, the outlets aired blurred photos allegedly showing male staff members of government MPs taking explicit photos of their genitalia while in their offices, including one committing a sex act inside the office of a female politician.

The reports also alleged MPs and staff regularly engage in sex in a prayer room inside Parliament House – a well-known rumour for years inside Canberra circles – and claims that sex workers had been brought to the building “for the pleasure of Coalition MPs”.

No MPs were named in the report, but one anonymous whistleblower claims a group of male staffers shared photos and videos in a Facebook Messenger group chat for several years.

The whistleblower said he had engaged in sex inside the prayer room.

The New Daily understands at least one staffer, who was able to be identified from the reports despite photos being blurred, was quickly terminated on Monday night. The Prime Minister’s office has been contacted for comment.

Senator Birmingham, whose department has charge over the employment of Parliamentary staffers, was livid at the details aired in the report.

Responding to the allegations just moments after they were published, Senator Birmingham told a Senate estimates hearing that such actions and staff were not welcome in government.

“I am disgusted and appalled at what I see alleged in relation to this story. It shows a complete disregard for all that our parliamentary democracy stands for,” he said.

“It demonstrates an enormous disrespect for the employing member or Senator in relation to those staff and those offices. It equally shows a complete contempt, frankly, for the Australian taxpayers who pay the wages of such staff.”

Senator Birmingham said any staffer involved “ought to prepare to pack their bags and leave the building for good”.

“They should also think intently about apologising, not just to their employing member or Senator, but to the Australian public,” he said.

Explosive exclusive from @10NewsFirst's @vanOnselenP tonight. Government leader in the Senate @Birmo is appalled and says anyone involved should prepare to 'pack their bags and leave the building.' #auspol https://t.co/pxrvr0oqzV pic.twitter.com/6MypZZKcHR

Senator Birmingham, who was sitting in the hearing room as the story was published, said he had only heard the full details of the story after it had been aired.

“I want to see this sort of behaviour stamped out,” he said.

The Channel 10 story was published just hours before ABC’s Four Corners was due to air an explosive report into ‘who knew what when’ in relation to the allegations of rape from former Coalition staffer Brittany Higgins.

The ABC published a story with a Parliament House security guard who said she found Ms Higgins inside the office of Defence Minister Linda Reynolds, the morning after the alleged rape.

The guard, Nikola Anderson, claimed Mr Morrison had been given “false information” about the circumstances surrounding that night, claiming there was no “security breach”, as had initially been claimed.

Earlier in the day, Mr Morrison faced even further questions about what he and his office personally knew about the incident alleged by Ms Higgins.

It was confirmed by the secretary of his department, Phil Gaetjens, that an internal report into that question had been quietly shelved after discussions with federal police.

The PM would not confirm if he had asked his staff whether that had occurred, only saying he “had no knowledge” and that “there is no information that has been put before me”.

However, as Labor members angrily pointed out, Mr Morrison did not answer whether he had actually asked his staff about it.