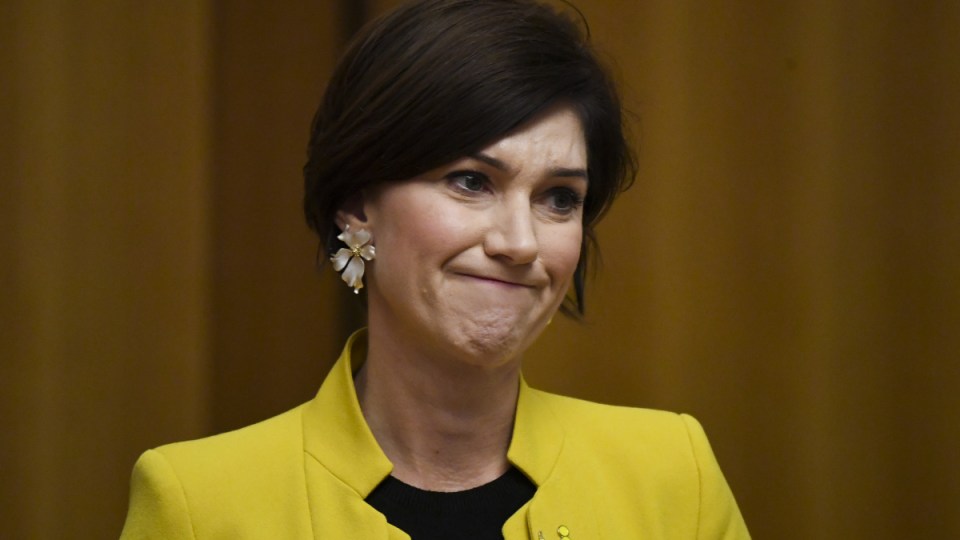 Nicolle Flint made another emotional speech to Parliament on Thursday Photo: AAP

Women on both sides of politics have shared the vile abuse and threats they routinely cop for doing their job, with the Parliament hearing emotional pleas for things to change.

“This issue is an incredibly important conversation. It is one of unquestioned solidarity from me and my Labor sisters, to all women across the political divide,” opposition MP Ged Kearney said.

It comes as the Senate passed sweeping new privacy protections for political staffers who were worried about having their personal details exposed through Kate Jenkins’ probe into parliamentary culture, with hopes more people will come forward to make complaints.

Liberal MP Nicolle Flint turned the political blowtorch back on Labor on Tuesday, alleging the opposition stood idly by while she was harassed and attacked by progressive campaigners during the 2019 election. Ms Flint, who has decided to quit politics, claimed Labor should have done more to call out vile slurs made against her.

On Thursday, Ms Flint gave another emotional speech, saying she had copped even more “disgusting” abuse in the days since.

“No wonder you’re being stalked by someone, you deserve it. You’re a piece of crap,” Ms Flint claimed someone had told her in an email.

“The filth you’re associated with both in your past with Sky News and the LNP rape club, with its continued lies and cover ups, gives me the reason not to believe you,” she claimed another read.

Ms Flint claimed one particularly vile correspondent had called her a “rancid coward” and “a ruling class slut”.

She said she was “tired of the political fight… tired of having to defend the fact I am a woman.”

It came the same day a senior staffer to assistant treasurer Michael Sukkar was forced to resign, after he was revealed to have yelled a slur at a female MP in Tasmania in 2019.

Later that day, a series of female Labor MPs also recounted their own stories of similar abuse, disgusting letters, and serious threats to their personal safety. Several of the MPs later approached Ms Flint in the chamber, offering a hug.

Labor MP for Cowan, Anne Aly, said she regularly copped disgraceful sexist and racist abuse. The first Muslim woman ever elected to federal parliament, she recounted recent emails and letters calling her “spawn of the devil”, saying she should be “sent to the ovens”, and one threatening that she would be “shot dead at your local shopping centre carpark in the near future”.

“All women deserve to feel safe,” she told the parliament.

“Criminal or abhorrent behaviour and comments directed at women is a serious issue that needs urgent action, and members of parliament are not immune.”

Susan Templeman, the Member for Macquarie, said she and her office received “daily derogatory abuse”, including having campaign posters defaced, threats made in-person and over the phone, and horrific emails and letters.

“You can’t fix what you don’t talk about,” she said.

“No one should face this, not in any work environment.”

“These things shouldn’t happen… not to anyone.”

Ms Kearney, a former high-ranking trade union official, said she had witnessed vile abuse from “both sides” when she made the move into federal politics for her first election campaign.

She recounted her photos and posters being stolen and defaced, with graffiti depicting her as a “pig”, “witch” and “baby killer”.

Ms Kearney, said the issue should not be confined to one side, and said she and other Labor women wanted to show “solidarity” to other victims of such harassment.

It echoed words from Senator Penny Wong and Tanya Plibersek, who had on Wednesday reached out to Ms Flint to share their sympathies and propose working together to address the abuse inside politics.

“I would say to Ms Flint, I agree with you, let’s try to make this a better place for women, let’s use our positions to make things better,” Senator Wong said on Wednesday.

Separately, the government and opposition banded together to rush through legislative reforms to support the inquiry into parliamentary culture by Ms Jenkins, the sex discrimination commissioner.

As reported by The New Daily on Wednesday, dozens of current and former staff – including Brittany Higgins – had penned a letter to Scott Morrison and Anthony Albanese, demanding the parliament put in new safeguards to ensure submissions to the review stayed private.

After quick negotiation, the Senate passed changes to make the inquiry exempt from the Freedom Of Information Act, and to only release details of the inquiry under the Archives Act after 99 years.

That addresses a key concern in the letter, with staffers saying the current situation could “significantly damage a victim’s career at the time and cause retraumatisation.”

Late on Thursday, just before the Senate rose for the last time until May, Finance Minister Simon Birmingham confirmed the changes.

“The participation of current and former staff in the independent review will be of paramount importance to bringing about the cultural and practical change that is necessary in our parliamentary workplace,” he said.

“We want all participants to feel supported and have confidence knowing that in sharing their experiences their personal and sensitive information will be safeguarded and their privacy respected.

The legislation passed the Senate, and is expected to pass the lower house next week.