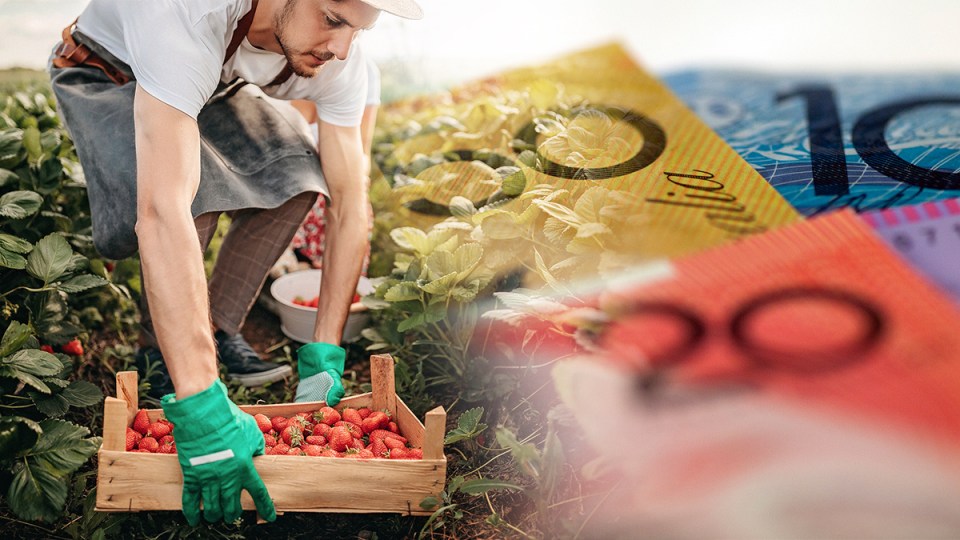 One of Australia's biggest unions is waging a war on piece rates.

A German woman has told how she couldn’t afford to eat while being paid less than the price of a cup of coffee thanks to a minimum-wage loophole on Australian farms.

In one case of what’s being labelled “legal exploitation”, Carmen Hardt was paid just $19 for two days work picking zucchinis on a Bundaberg property last year.

As her farm experience rolled on Ms Hardt got quicker but she barely made a liveable wage.

On top of this, one of the hostels she was forced to stay at by her employer charged $250 a week.

“The hostels give you just enough work to pay your rent sometimes not even that,” she told The New Daily.

Ms Hardt was had barely had enough to live off – she ate instant noodles and the bruised fruit that had fallen off trees on the farms where she worked.

The hostel she stayed at arranged which farms workers went to – and they were moved around a lot. Some promised hourly rates before flipping to piece-rate after the work had started.

“Hourly paid jobs are only for the first week to make it seem good and fair,” she said.

Between February and July this year,  Ms Hardt did a stint in the Victorian town of Shepparton for a big apple farm.

They told her in the interview she would be paid piece rate and forced to stay in their accommodation with nine other girls, at a cost of $175 a week.

I made $30-ish in 11 hours because the fruit wasn’t good enough or ripe enough during that time,’’
– Carmen Hardt

Because of the pandemic, and the need to complete rural work to qualify for her visa, Ms Hardt was stuck on the farm. She made $585 in her best week there.

She said the experience made her regret coming to this country.

“I was calling my friends crying wanting to go home wondering why I even came to Australia.”

Now, one of Australia’s biggest unions, the Australian Workers Union (AWU) has fired an opening shot in a war with Australia’s farmers over whether they should be forced to pay minimum wage.

Across the country pickers on fruit and vegetable farms are paid either two ways – a base rate they receive as a salary and piece rate which is based on how much they pick.

With piece rates, there is no guarantee of making minimum wage.

On Wednesday the AWU will apply to the Fair Work Commission to amend the Horticulture Award to guarantee that every worker on every farm is entitled to take home the minimum casual rate of pay – $24.80 per hour.

Under the AWU’s proposed amendment, piecework arrangements would still be permitted, but every worker would be guaranteed the award rate as a floor.

“After a slew of investigations, inquiries and media exposes over a decade, we know for a fact that worker exploitation, worker abuse, and even modern slavery is rife on Australian farms,” said AWU national secretary Daniel Walton.

Australia’s fruit and vegetable industry is the only one where incentive pay exists with no minimum guarantee, he said.

“The farm employers lobby is fond of claiming that fruit pickers on piecework arrangements make more than the minimum wage. If that’s true then they should have zero problems with supporting our amendment,” he said.

The proposal is expected to generate backlash from farming bodies, who argue piece rates allow workers to earn more.

The peak body for farmers in Australia, the National Farmers Federation, said they would not comment until they saw the details of AWU’s proposal.

“However it must be stressed that when properly used, piece rates reward productivity and no change to the Award can be allowed to compromise that position,” NFF CEO Tony Mahar said.

The process will likely drag on until the middle of next year, where there will be a proper court hearing.

On Tuesday, federal Agriculture Minister David Littleproud weighed into the debate, claiming fruit was rotting because unemployed Australians would rather sit on the couch.

Sarah Jones, 38, has worked as picker most of her adult life and runs a share house for backpackers to stay when they come to work on farms at Tully, a regional Queensland town.

She previously told The New Daily she has “no idea” how anyone makes a living from piece rates.

“It’s like they’re setting them up to fail. You have people, depending on how fast they’re going, they can make $40 for a day,” Ms Jones told The New Daily.

“They need to make it worthwhile. Why don’t they give a base salary? So they say, ‘You will make guaranteed $400 to $500 this week and your commission on top if you pick X amount’.”

It’s not just backpackers – citizen said they had taken jobs on farms and wound up with only $40 in their pocket for a day’s work.

One NSW woman, who did not want to be named, had recently gone out to pick blueberries on a farm in Coffs Harbour.

“We saw this ad on Facebook, it said we would make $1500 a week fruit picking blueberries near Coffs,” she said.

“We weren’t expecting to make that much, but there are no jobs we were bored, so we thought why not.”

“I mean if you’re going five days a week, you could probably make $400  if you’re lucky. And that’s absolutely working your guts out.  I mean physically, in pain, in the blistering sun.”

It was 30 degrees, there was no toilet so they had to go on the bushes and work is hard but if she had been getting an hourly rate she would have stayed she said.

“The guy who owned it, he said this was his the best crop, but no one is here to pick it. I was just thinking, why don’t you put the pay up, people will do it.”

Last week the National Farmers’ Federation President Fiona Simson implored anyone with experience or knowledge of mistreatment when working on Australian farms to inform the appropriate authorities.

“I continue to be sickened to learn of instances where often young men and women, many visitors to our country, are subject to mistreatment when working on Australian farms,” Ms Simson said.

If a worker believes they have been under paid, they must inform the Fair Work Ombudsman by calling 13 13 94, she said.

“If the mistreatment is of a potential criminal nature, such as sexual assault, it is a police matter. A complaint should be made to the local police, Crime Stoppers on 1300 333 000 or in the case of an emergency, by calling 000,” she said.