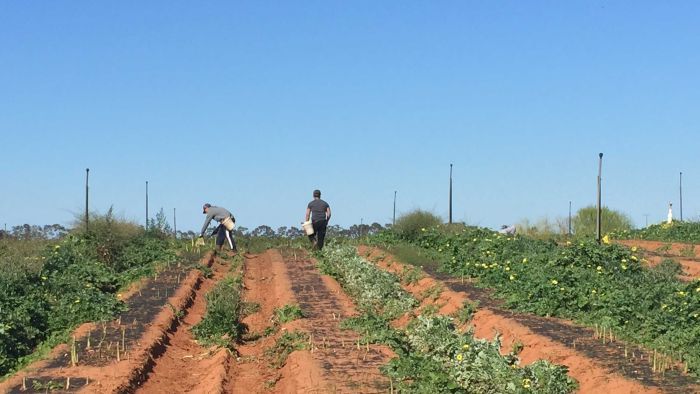 A recruitment company set up at the start of the pandemic to find Australians work on farms has found it ‘impossible’ to get locals jobs, despite the industry crying out for boots on the ground.

One of the founders of AgriAus, who spoke to The New Daily on the condition of anonymity, said the company had put out a ‘call to farms’ to employ interested Australians and get them picking fruit and vegetables on the nation’s farms to save produce from waste.

The New Daily can also reveal that many labour-hire companies for the agricultural sector are advertising positions exclusively for backpackers, leaving unemployed Australians, who say they’re happy to work for fair pay, out in the cold.

AgriAus had more than 1500 applicants for farm work but was unable to secure even one of them a job due to farmers’ preference for foreign workers, the firm’s co-founder told The New Daily.

“We got 1500 applications from people desperate for farm work in three days,” he said.

“We started making contact with farmers to gauge if they wanted people to go out there or not. We spoke to the Department of Agriculture to see if they could push it, but it doesn’t seem to make a difference because the farmers don’t want to change their habits.”

He said they had tried farms across Victoria, New South Wales and Queensland, but as soon as employers heard the job seekers were Australian citizens all interest died.

What we’ve been finding is the moment you say you want to get an Aussie a job, the farmer doesn’t want to listen,” he said.

“We did a bit of digging around why, and farmers said ‘one, they’re lazy’, and ‘two, we have to pay them’.

“I’ve applied and been out to farms myself. The moment you say you’re a citizen you don’t get a response whatsoever.”

The coronavirus pandemic has thrown Australia’s fruit and vegetable picking industry into crisis, with an expected worker shortage by March of 26,000, and billions of dollars of produce at risk of being wasted if it can’t be picked.

Despite this, a growing cohort of locals are struggling to get work and the farmworkers’ union has told The New Daily that growers’ preference is to employ cheap, easily exploitable foreign workers over locals, and the industry needs to be ‘cleaned up’.

Currently, labour-hire companies across the country are advertising for positions, some of them specifically stating they will only employ backpackers.

‘Working holidaymaker only’ several job ads say, while others specify that candidates ‘must have a WHV visa’ to apply.

Following a previous report by The New Daily – which revealed that job seeker Lukus Muir had been rejected for 20 farm jobs – the government announced it had teamed up with the National Farmers Federation to deliver a $6000 incentive for anyone willing to take a job in the country.

But Australians looking for farms jobs said it would do little good if farmers refused to hire them.

To ‘clean up’ the sector, Ms Armstrong listed the key things that needed to be done: Support existing horticulture workers, invest in our growing regions to make sure there is adequate infrastructure, and end the exploitation of undocumented workers in the industry.

“Supermarkets also have an important role to play,” she said.

“They are the biggest retailers of the fresh fruit and vegetables grown in Australia and must take greater responsibility for leading change, demanding, and ensuring responsible employment practices and humane treatment of workers in their supply chain.”