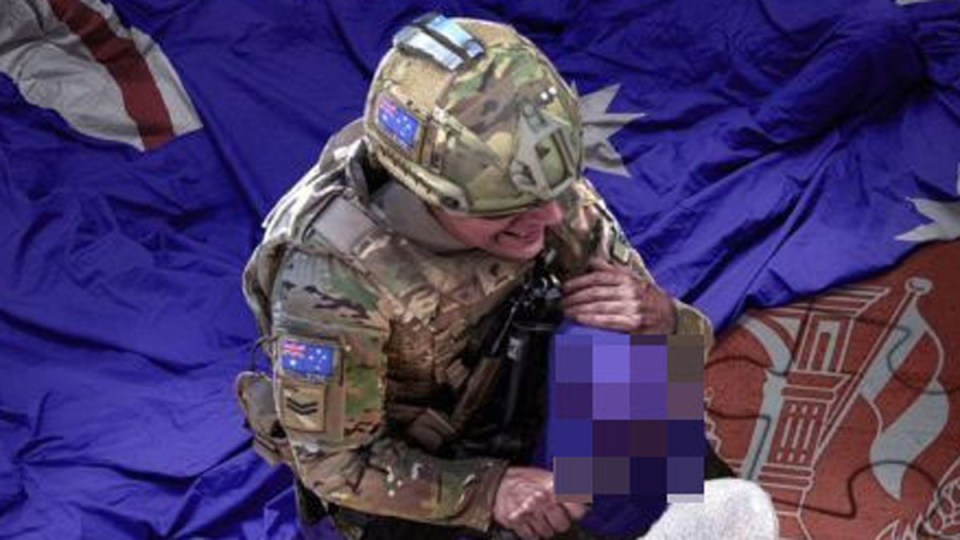 An edited version of the tweet posted by a Chinese government offiicial.

A furious Scott Morrison has demanded an apology from China after an official government spokesperson tweeted a stomach-churning meme of an Australian soldier slitting the throat of a young child.

The Prime Minister has demanded Twitter delete the post, after the Chinese government joined Russia in condemning Australia’s Defence Force over the recent war crimes report where ADF special forces were accused of 39 war crime murders of Afghan citizens.

“It is utterly outrageous and cannot be justified on any basis whatsoever,” Mr Morrison said of the computer-generated image.

“The Chinese government should be totally ashamed of this post.”

Lijian Zhao, deputy director of China’s Ministry of Foreign Affairs, shared the computer-generated image with a blistering criticism of the ADF.

“Shocked by murder of Afghan civilians & prisoners by Australian soldiers. We strongly condemn such acts, &call for holding them accountable,” he tweeted on Monday afternoon (AEDT).

The graphic showed a grinning soldier in ADF camouflage, holding a bloodied knife to the throat of what appears to be a young child holding a lamb.

The two figures are shown standing on Australian and Afghan flags. Several other lifeless bodies appear underneath the Australian flag.

“We are coming to bring you peace,” a caption reads.

Allegations in the Inspector General of the ADF’s report, released two weeks ago, include a key claim that Australian soldiers cut the throats of two young boys and dumped their bodies in a river because they thought they were Taliban sympathisers.

Mr Zhao is one of the most visible faces of the Chinese administration. His Twitter account is flagged by the social media service as an official “China government account”.

Mr Morrison called an extraordinary media conference at short notice on Monday, blasting the image as “repugnant” and “deeply offensive”. He said the government had appealed directly to Twitter to remove the image.

PM @ScottMorrisonMP says the Chinese Government should be utterly ashamed after a Gov official posted a fake "repugnant" image of an Australian soldier. pic.twitter.com/9fie02F6iJ

Twitter has declined to delete posts from official government accounts in the past, claiming a public interest in users being able to read what politicians are saying – regardless of truth. The New Daily has contacted Twitter for comment.

TND asked Mr Morrison on what grounds he wanted the tweet deleted. He answered that it was a “falsehood” and said Twitter should remove it as a “common decency”.

“It is utterly repugnant. It is deeply offensive to every Australian,” he said.

After being tweeted at 12pm, the tweet remained live as of 2pm Monday.

“Australia’s condemnation of this image is above politics and we all stand as a nation in condemning it,” Mr Albanese said in parliament.

It is yet another escalation in tensions between Canberra and Beijing, coming as China unleashes repeated heavy criticism of the Australian government. Chinese diplomats released a list of 14 “grievances” about Australia to Channel Nine last week, including comments by our politicians, and some media reporting.

Many view China’s repeated trade sanctions on Australian products such as wine and barley as punishment for the grievances.

The disturbing army image came just hours after it was revealed Russia had also joined global criticism of Australia after the IGADF report.

“This is a truly shocking report,” Foreign Ministry spokesperson Maria Zakharova said in prepared remarks at a briefing last week, first revealed by the ABC.

“The circumstances make us truly doubt the genuine capacity of Australian authorities to actually hold accountable all the servicemen who are guilty of such crimes.”

She claimed Australia’s credibility on the world stage had been shattered by the revelations.

“It makes us reassess the true meaning of the official line pronounced by Canberra to protect the rules-based world order,” Ms Zakharova said.

There is also criticism closer to home, after ADF chief General Angus Campbell said he planned to strip military honours from special forces troops who had served in Afghanistan between 2007 and 2013.

As reported by TND on Monday, the federal government appears to be trying to walk that back, claiming no decisions have been made.

A veterans’ organisation has collected more than 55,000 signatures on a petition opposing the move.

Senator Jacqui Lambie fired off a stinging criticism of General Campbell on Monday.

“If General Campbell hasn’t felt the bitch-slap from all those millions of Australians out there, I would suggest he take his head out of his arse,” she said.

Fellow senator Rex Patrick said he would move an apology to the people of Afghanistan in the Senate this week, and hoped the motion would receive support from major parties.