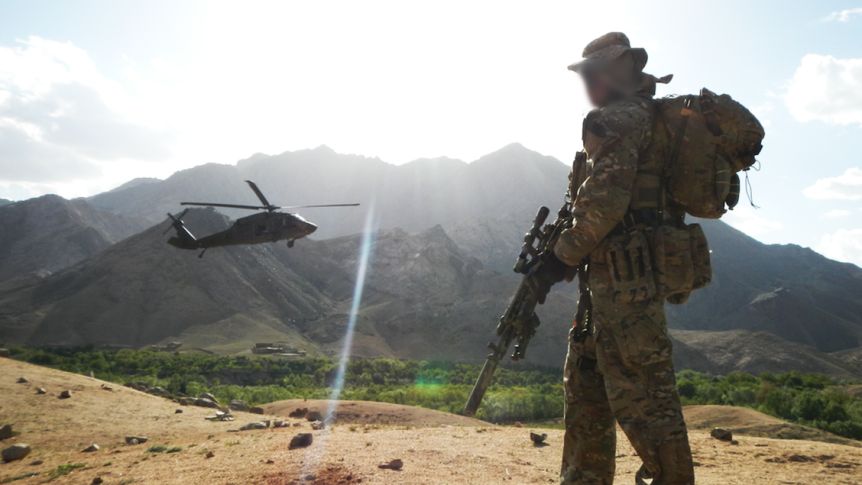 The government is at odds with the ADF over whether elite soldiers will have their Afghanistan citations stripped. Photo: ABC

The Defence Force chief’s plan to revoke military honours for 3000 special forces troops may have been blocked, with shifting stories and the government at odds over how army sanctions will be decided in the wake of the Afghanistan war crimes report.

The government appears to be walking back General Angus Campbell’s moves to strip the Meritorious Unit Citation from Special Operations Task Groups that served in Afghanistan, saying such a move would be for government – not the Chief of the Defence Force – to make.

It comes as a petition from a leading veteran’s support group, opposing the blanket revoking of citations, hits 55,000 signatures in a matter of days.

“We’ve seen leaders respond in their own heat of battle. They did so shooting from the hip, without taking into account the lives and families it affected,” retired Special Forces commander Heston Russell told The New Daily.

The damning Inspector-General report found “credible evidence” of the alleged unlawful killing of 39 people by 25 special forces troops, with victims including prisoners and civilians.

The report claimed some prisoners were subjected to “severe physical pain” then killed while handcuffed.

Speaking on the release of the report, General Campbell told a press conference there was “a collective responsibility” for the alleged crimes, in explaining his call to revoke the citation for the entire group of special forces soldiers.

“I have accepted the Inspector-General’s recommendation and will write to the Governor-General requesting he revoke the Meritorious Unit Citation for Special Operations Task Groups who served in Afghanistan between 2007 and 2013,” the General said.

“While necessary, I appreciate that these latter decisions will be a bitter blow for many.”

It was presented as a final decision by the chief, with General Campbell saying he would be the one to “review and make recommendation to the Governor-General” regarding honours and awards.

However, that assertion appears in question, according to Prime Minister Scott Morrison.

On 2GB radio last week, Mr Morrison downplayed a question about General Campbell’s plan, saying the ADF was still “working out their response”.

“Decisions haven’t been made yet on these things and so let’s just see how each step unfolds,” the PM said.

“I’m not going to run a daily commentary on every suggestion that comes out.”

TND contacted the Defence department and Defence Minister Linda Reynolds for clarification on the status of the citations, considering the PM and General Campbell issuing seemingly conflicting statements.

A department spokesperson seemed to signal General Campbell’s support for revoking the citations was not a done deal.

They said the department was preparing a “comprehensive implementation plan to action the Inspector-General’s recommendations”.

“The implementation plan is being developed with the oversight of the Minister for Defence and an independent oversight panel,” the spokesperson told TND.

“Final decisions on this advice will be a matter for government.”

In a follow-up statement, a defence spokesperson added that the process “will take time due to the complexity of the issues outlined in the report.”

“Any action in relation to the Meritorious Unit Citation will be considered as part of the implementation plan,” they said.

Questions about whether General Campbell had written to the Governor-General, or still planned to, were not answered.

Senator Reynolds’ office did not respond to questions before publication time.

The government’s walking back of General Campbell’s comments has been seen by some in Parliament as a response to a huge public outcry over the citation move.

Veterans groups have criticised the blanket nature of the punishment, applying to thousands of soldiers despite the IGADF report only concerning a few dozen.

Mr Russell has been critical of what he called “mixed messages” from General Campbell. Despite proposing to strip citations from all special forces who served in Afghanistan from 2007 to 2013, General Campbell said he would deal with issues regarding troop commanders “case by case”.

“How they’re applying these broad brush strokes, including to 20 fallen heroes, is not only disgusting but callous and unAustralian,” Mr Russell told TND.

“What message does that send to veterans or future potential soldiers, to see the highest levels of leadership in our country punishing the many for the actions of a few, without the assumption of ‘innocent until proven guilty’?”

In recent times he has vehemently denied some media reporting around allegations involved in the IGADF report.

In a Daily Telegraph article last month, he identified himself as the platoon commander of a unit that an ABC investigation had alleged was involved in killing an unarmed Afghan prisoner.

The ABC said it stood by its reporting, and called the article “a weak attempt to undermine the ABC’s important journalism on this public interest issue” and “a slur on months of dedicated reporting”.

“The report attacked by News Corporation today was the result of extensive work over two months, including multiple interviews with our key source. Our source also stands by his account,” the ABC said.

“The ABC is aware former commando Heston Russell, who features in the News Corporation story, has disputed the allegation in our report. Russell was not named in our report. We have no knowledge that he was even on the raid in question.”

Mr Russell has continued to speak out about the need to ensure not all soldiers are tarred with the same brush.

He said relatives of killed special forces troops who would have their citations stripped had been left upset.

“We have conversations like ‘it’s been 10 years since we lost our son, we thought we’d healed as much as we could, but now the wounds are being torn wide open and there’s salt added by not hearing from any of the politicians or generals who happily posed for photos at his funeral’,” Mr Russell said of his talks with families.

Voice Of A Veteran is running an online petition calling for the Governor-General to not strip the citations. Mr Russell said 55,000 people had already signed.

“The good people of Australia, and their common sense, are able to see right through what has ultimately been a terrible and uninformed decision,” he said.

Confusion over revoking Afghanistan citations as ADF, government at odds