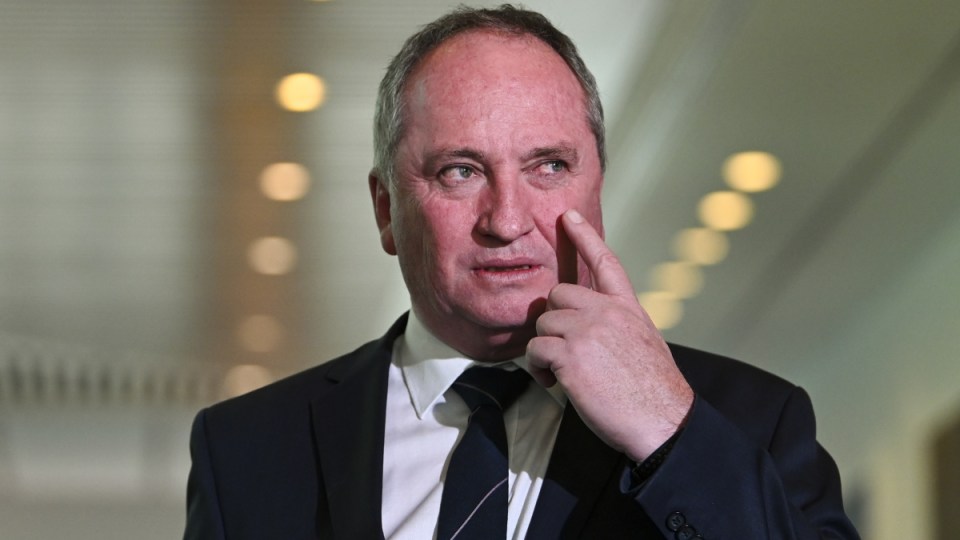 Federal parliament is facing its “Me Too moment”, a senator says, as government members attack the ABC over an explosive report alleging misconduct by two senior ministers.

Former deputy Prime Minister Barnaby Joyce has claimed parliament’s ‘bonk ban’ was actually a “Barnaby ban”, coming out strongly in defence of Coalition colleagues Christian Porter and Alan Tudge, and alleging Malcolm Turnbull knew about the allegations against them years ago.

The two ministers were named in a controversial Four Corners report on Monday night, which aired allegations they had conducted secret affairs with staff members.

Mr Tudge said he “immensely” regretted the relationship with a former staff member in his office in 2017, while Mr Porter threatened legal action and strenuously denied claims about an alleged encounter at a Canberra bar with a young woman from another minister’s office.

Despite this being a parliamentary sitting week, and most politicians usually fronting up for short interviews outside Parliament House early in the morning, almost no MPs commented on the Four Corners report.

One who did, however, was Nationals MP Mr Joyce, famously forced to quit as deputy PM in 2018 after revelations he was engaged in a secret relationship with a staff member.

Despite – or perhaps because of – his demotion, Mr Joyce said he didn’t want to see the ministers lose their jobs after the ABC report.

He said he believed Mr Porter was “fit” to continue as Attorney-General.

“I could get a lot of schadenfreude and revenge saying ‘no, all these other people should go as well’, but that would be wrong,” Mr Joyce said in Parliament House on Tuesday.

“If it’s a consensual relationship between two adults, then if you’ve got a problem with that, that’s a role for the police or a priest. I’m not a politician to be the arbiter for how two people can feel about each other.”

Barnaby Joyce says there are “others on both sides of politics” who could face similar claims to those aired on #fourcorners last night. #auspol @theheraldsun pic.twitter.com/9sg18xpKyX

Mr Joyce claimed people “on both sides of politics” had similar dalliances.

The Member for New England said he wouldn’t be naming names, but claimed he had told then-PM Malcolm Turnbull about other such relationships at the time of his 2018 sacking.

“I feel the ‘bonk ban’ was never a bonk ban, it was a Barnaby ban that was created to remove me from office,” he alleged.

“I don’t think trawling the media is the way to go about these things,” Senator Canavan said.

Other government senators had called the ABC’s “impartiality” into question on Monday, in an extraordinary Senate estimates appearance by managing director David Anderson.

On Tuesday, several politicians spoken to by The New Daily claimed they either had not seen the program, or did not wish to comment.

Outside Parliament House during sitting weeks, politicians normally line up to give short press conferences called “doorstops”, usually on a newsworthy topic of the day or a pet issue of theirs.

These short interviews often see MPs take potshots at their political opponents. Up to a dozen politicians can front up on some days, the queue jokingly referred to by journalists as “the conga line”.

The lines on Tuesday, however, lay empty.

Not one single House of Representatives politician, of any party, voluntarily fronted up for a formal interview. This is highly unusual for sitting week.

Half a dozen politicians walked past waiting journalists, all saying they hadn’t seen the program, that they wished not to comment, or claiming to be on the phone. Only one senator, Larissa Waters of the Greens, made an appearance.

She claimed the Four Corners program represented “Parliament’s Me Too moment”, and called for Parliament to be “a safe workplace”.

Labor MP Terri Butler gave some brief comments as she walked into Parliament House. She praised the women who spoke to Four Corners as “courageous” and said they should be supported.

“All women deserve to be safe at work, and all staffers deserve to have their workplace be a safe workplace,” Ms Butler said.

“I don’t think this should be a partisan issue. The question here is, how can people feel safe at work? How can we make sure women have a safe workplace?”

She said it was up to PM Scott Morrison to assure the Australian public that ministerial codes of conduct had not been breached.

“What people want, is to have trust in politics again,” Ms Butler said.