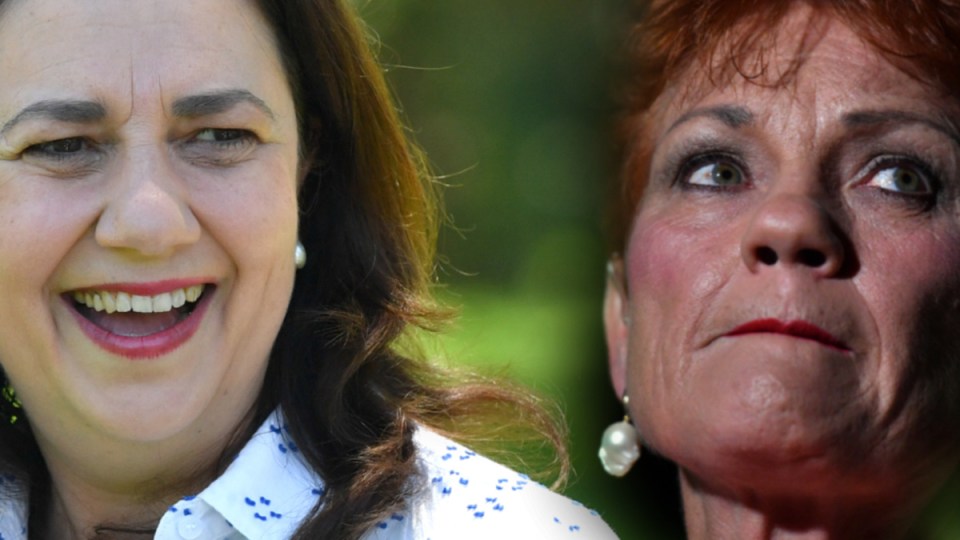 The Sunshine State has been a One Nation stronghold since the party’s birth, with locals electing Ms Hanson and assorted cronies throughout the years and handing her party nearly 14 per cent of the votes at the last state election.

A term on and the Ipswich fish and chip shop owner’s popularity is starting to look more like a flash in the pan.

On Saturday night, barely an hour after polls closed, Antony Green consulted the giant television in the ABC studio and remarked “the story of this election at the moment is the collapse of the One Nation vote”.

The vote count continues, but as of Sunday One Nation had just half the share of votes it garnered three years ago.

The party had less than seven per cent of the vote, a crushing swing just one election after talk of One Nation rising as a genuine third force in the state.

Voters, meanwhile, swung in behind Labor.

Premier Annastacia Palaszczuk sticking to her guns on the strict border measures, lambasted in Sydney and Canberra, seems to have done the trick.

One Nation will keep its lone seat in state Parliament, so its representation remains the same.

But for a party that rode the swelling wave of Trumpian populism that swept the world this decade, the humbling result in its traditional heartland rings alarm bells for what relevance Ms Hanson continues to have in 2020.

Queensland voters returned to the safety and known quantity of the big parties, both Labor and LNP increasing their shares.

But it’s not just a minor v major party issue. The Greens, for instance, only took a one per cent haircut.

Indeed, the strain for One Nation was on show early on election night, as Ms Hanson and chief adviser James Ashby gave tetchy live TV interviews.

Mr Ashby, cribbing yet another page from the Trump playbook, blamed media for the result, accusing the ABC of ignoring One Nation because the broadcaster didn’t have enough resources.

It’s a thrilling argument from a man who called for $600 million in ABC budget cuts only three years ago.

He called the public broadcaster “fat” and claimed the election result would mean fishermen “will absolutely be raped and pillaged”.

Over on Sky News, Ms Hanson fended off suggestions she hadn’t campaigned enough, and also whinged about a lack of attention.

“[Media] didn’t give us the coverage that I believe that they should have,” she complained.

But therein lies the rub. Is One Nation even enough on the public’s wavelength in 2020 to take up their energy – or the media spotlight?

How many Australians have time to engage in culture wars when their grandparents’ lives, and their livelihoods, are on the line?

In this pandemic, in Australia at least, voters have rewarded parties for getting the job done, and whacked those acting as traditional wrecking oppositions.

Three recent state and territory elections have seen incumbent governments returned (albeit in the Northern Territory and Australian Capital Territory there were wins with slightly reduced majorities).

Oppositions in NSW, Victoria and Western Australia struggle for relevance, voters punishing them for negativity.

Federally, Anthony Albanese has tried to avoid the negative role as Opposition Leader, but still struggled for cut through as Scott Morrison leads a pandemic response that is arguably the envy of much of the world.

Despite huge errors in federally-run aged-care homes, Mr Morrison is streets ahead as preferred Prime Minister and leads Labor 52-48 in the latest Newspoll.

While even the opposition leader struggled for relevance, it was unlikely a fringe party like One Nation could be considered a worthwhile contributor to the national debate.

In one way, though, the protestations from Ms Hanson and Mr Ashby about a lack of media attention may ring true.

Since her axing from breakfast television, you’d be forgiven for forgetting Ms Hanson existed.

Without the spot on air, there was little oxygen to support the usual puff and bluster.

The populism peddled by One Nation, of being ‘politically incorrect’ and – as her infamous stubbie holders boast – having “the guts to say what you’re thinking”, thrives on the kind of outrage trumped up on TV panels and carried on through Twitter and Facebook.

Hungry for the next headline to power through a 24-hour news cycle, media outlets normally regurgitate the controversial and clickbait-inspiring views from the fringes.

But we all know 2020 has been nothing but normal.

Journalists and viewers have had bigger issues to worry about than the latest brainfart from Pauline Hanson or Malcolm Roberts; our mental space has been devoted to navigating this tricky new COVID world, with no extra room for One Nation’s newest screed on ‘fake news’ or transgender bathrooms.

Of course, another barometer on this type of politics comes on Wednesday (Australian time) as Americans decide whether Donald Trump deserves a second term.

One Nation senators famously popped champagne outside Parliament House following the 2016 election. But considering the Queensland result and polls showing Mr Trump well behind Joe Biden, the bubbly may be kept on ice this time around.

The Queensland election is just one point in time, and One Nation retains its one state representative, plus Ms Hanson and Mr Roberts in Canberra.

But the question remains; if their vote can collapse so significantly in just one term, where does the party go from here?

One Nation ‘collapse’: How Labor’s Queensland win shows Pauline’s populism is running out of puff