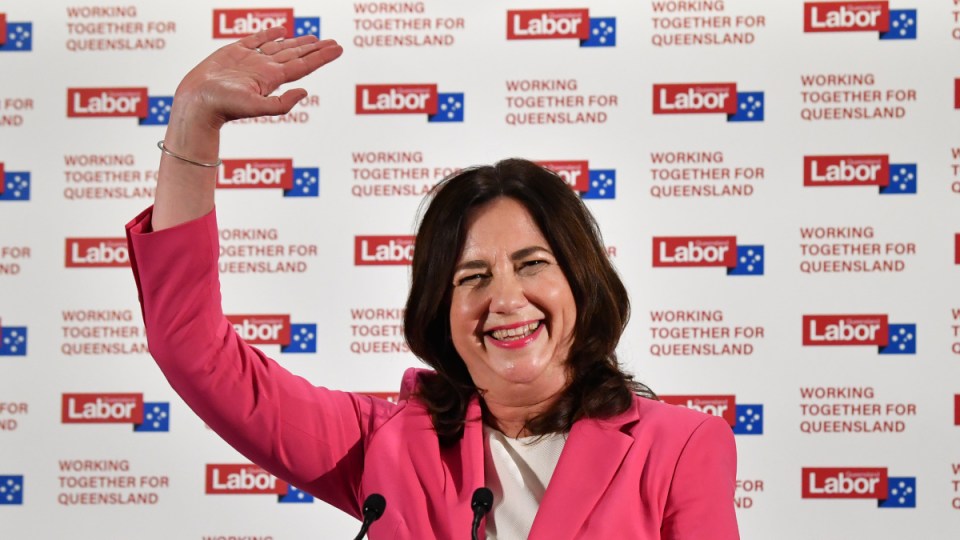 Annastacia Palaszczuk declares victory in Brisbane after a swing towards Labor. Photo: AAP

Queensland voters have backed the Labor party’s stance on borders to re-elect Annastacia Palaszczuk for an historic third consecutive term as premier.

After a campaign against the backdrop of COVID, Labor was rewarded with a swing of 5.3 per cent, with the premier noting that many people had voted for her party for the first time.

Despite a barrage of public criticism from everyone from the Prime Minister to Qantas boss Alan Joyce, voters declared their support for the Qld’s premier’s handling of the pandemic.

The leader once dubbed the “accidental premier” won her place in history as the first Australian woman political leader to secure three successive victories.

However it was not all positive news for the returning state government which has lost a key Labor figure in former deputy premier Jackie Trad who was unseated by the Greens.

The Greens are on track to hold at least two seats in Queensland parliament, with Amy MacMahon claiming victory over Ms Trad in South Brisbane.

Significant traction was lost by One Nation, whose vote fell 6.8 per cent.

Clive Palmer’s huge spend on incessant online advertising was ineffective, with the party reaping just 0.6 per cent of the statewide vote and his wife Anna Palmer barely attracting 400 votes in Currumbin on the Gold Coast.

Labor’s strategists believe one of the key factors behind the party’s landslide win was older voters in the state’s southeast, who have tended to back the Liberal National Party, swinging behind Ms Palaszczuk for her tough stance on borders.

With counting to continue on Sunday, Labor was on track to hold as many as 49 seats – up one on its previous numbers.

Labor gained two long-time conservative seats in the Sunshine Coast region – Pumicestone and Caloundra – which have many older voters.

The LNP appeared to have lost a net two seats, taking its numbers to 36 in the 93-seat chamber.

Katter’s Australian Party was expected to hold three seats while One Nation’s Stephen Andrew and independent Sandy Bolton make up the final numbers.

But Labor’s swing was not consistent across the state, with the ALP doing better in the southeast corner and the LNP performing better in regional areas.

Claiming victory on Saturday night, Ms Palaszczuk said it had been an “incredibly tough year” for everyone.

“But here in Queensland we’ve all stood strong and united, and together we are on top of the pandemic, and if we continue to work together, we will stay strong,” she said.

“I know that during this election, there are many people out there in Queensland who have voted Labor for the very first time.

“I thank you from the bottom of my heart and I will return that respect every single day.”

She was welcomed by about 50 thrilled local Labor party members at her suburban Brisbane function at Inala’s Blue Fin Fishing Club on Saturday night.

She urged the premier to think about jobs and the economy as border restrictions remained in place.

“We’re in the middle of an economic crisis and it is far from over,” she said.

Mrs Frecklington’s deputy, Tim Mander, said the election result was “incredibly disappointing”, citing the inability for opposition parties across the country to get any political oxygen amid the COVID-19 pandemic.

Mr Swan said Mr Morrison should be worried with Labor being competitive in Queensland again after their federal election drubbing in 2019.

“Well he’s just got two fingers from the Queensland electorate,” he told AAP.

He accused Mr Palmer and the LNP of undermining democracy and said Australia needs new laws to stop disinformation.

“Setting up a fake political party to attract public funding and then working in concert with the LNP on a massive disinformation campaign is profoundly anti-democratic and a threat to our democracy,” he said.

“And we need new laws to knock it out.”

The triumphant premier was joined by her dad Henry, a former Qld primary industries minister, her mum Lorelle, sisters and nieces for her victory speech.

“What people wanted was to be isolated, and they know if you’re if they’re isolated that they’ll be protected,” he told reporters.

Mr Palaszczuk said his daughter never deserved the nickname “the accidental premier” after her shock win in the 2015 election.

His daughter was school prefect at the age of seven, she led debating teams in high school and she was very active in campus politics, he noted.

The premier easily won her seat of Inala, which she’s held since 2006, for the sixth time.

“It was just her destiny,” Mr Palaszczuk said.