MAGA hats, fiery debates and a right-wing leader slipping in the polls.

This sounds like the US election but this campaign is actually happening in our backyard, just over the ditch.

Next Saturday, New Zealanders head to the polls.

The main thing on the voters’ agenda needs no introduction – COVID-19 and New Zealand’s economic recovery.

Prime Minister Jacinda Ardern has been widely praised, both internationally and at home on her own turf, for ‘saving the county’.

When the pandemic hit NZ shores she closed the border, declared a full lockdown and rallied a “team of five million”.

As a result, she’s treated as the nation’s saviour.

She’s been mobbed for selfies, customers stand to applaud her when she walks into restaurants and people yell their thanks from passing cars’ windows.

After a horrific 20019, with the Christchurch shootings and White Island eruption, Mrs Ardern calmly led her country through another crisis, cradling its sense of community while cultivating kindness.

There is no doubt she will be returned to power, said former senior Labor advisor-turned-commentator Neale Jones.

“If you look at the polls, Labour has polled around 50 per cent, the Nationals around 30 per cent, the Greens are polling just over 5 per cent. With New Zealand First looking to be out of parliament at 1 per cent,” Mr Jones said.

But while Ms Ardern has ‘rock star’ qualities, at the end of the day she’s still a politician, he said.

“Jacinda is hugely popular, and she has huge support among the population, it’s that rock star feel,” he said.

“People feel warm to her, they think she’s managed COVID-19 well and they’ve responded to her messages of kindness.

“But she is a politician, and there are people who are opposed to her. There are lots of National supporters who would prefer a conservative direction.”

Ms Ardern might be the clear front-runner, but she’s come up against a formidable foe. 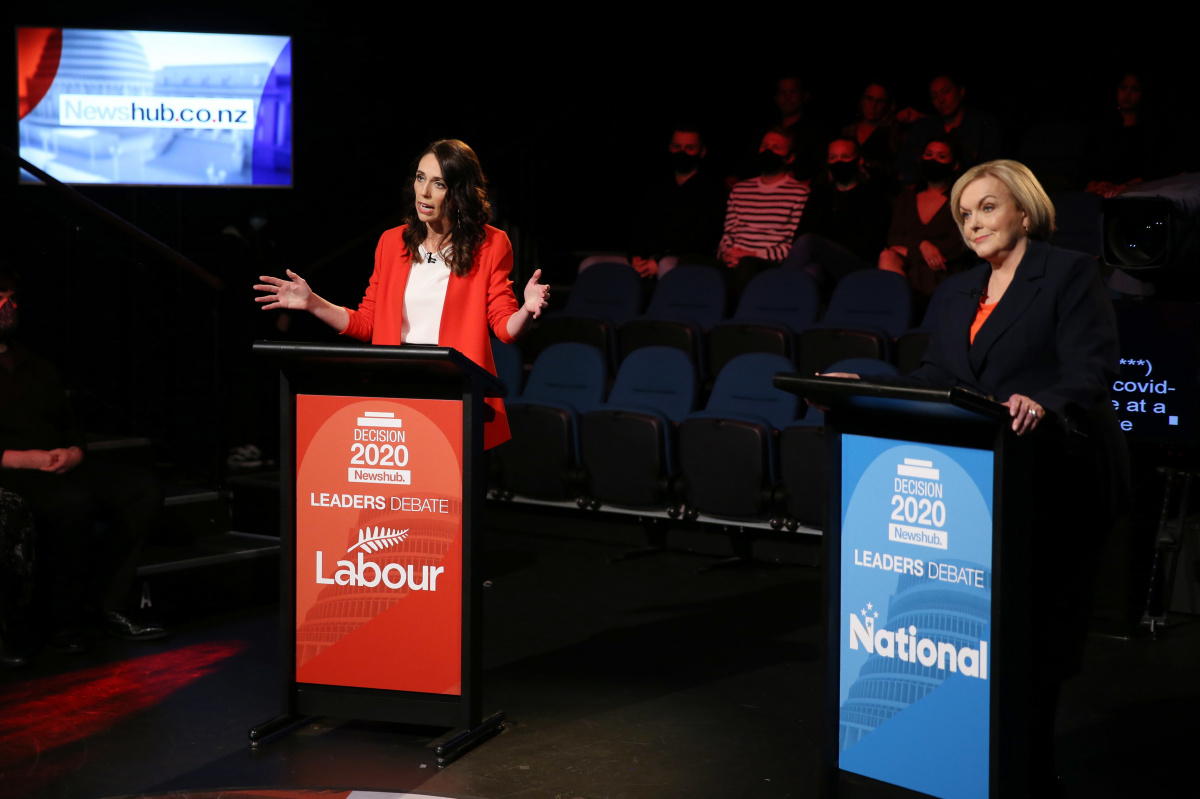 She’s is a seasoned politician, a veteran renowned for her cutting turn of phrase and quick wit.

The country calls her “Crusher” – the moniker inspired after her 2009 legislation to crush the cars of boy racers.

Last week, Ms Collins calmly ripped into Ms Ardern saying she only offered voters “love and a hug” in the wake of COVID-19 while she could offer them “hope and a job”.

The debates between the two have been lively, with each taking digs at the other’s MPs, cheers and jeers from the audience and protestors outside calling for an inquiry into Gloriavale, a secretive Christian sect based on the west coast of New Zealand’s South island

But it was at a debate between the parties’ finance ministers that raised eyebrows when a man wearing a MAGA hat – not Make America Great Again but Make Ardern Go Away – stood up.

He told the crowd he wore the hat to trigger people, before questioning the lockdown.

Labour’s finance minister Grant Robertson came right back, defending his leader: “She has more courage and intellect than you will ever have, sir,” he said, to rapturous applause.

But most of the controversies have revolved around photos, said Professor of politics Richard Shaw at Massey University.

“There’s been the occasional odd thing – a photo of Judith Collins praying before voting, which triggered a predictable flood of memes on social media,” he said.

“And Ardern being called out for taking a selfie with a very unsocial distanced group of students at my university, but not much apart from that.”

Everything has just come back to COVID-19, he said.

“From time to time there have been spats around the economic plan – specifically, whether or not parties’ costings add up,” he said.

“The Nats have taken particular fire over this, but it’s always framed in the context of COVID.

“A bit on different models for controlling the border – but that’s just COVID redux too.”

She’s a winner, but by how much?

The big question is will Ms Ardern be able to govern alone.

Labour needs 61 seats in the 120-seat chamber to govern in its own right. This would be a rare and historical win not seen since 1996.

The kingmaker in the last election, populist right-wing New Zealand First Party leader Winston Peters, has slipped in the polls and may not retain a seat.

If Ms Ardern can’t snag it for herself, she’ll govern with The Greens, said Mr Jones.

“Labour and The Greens have a very different relationship to the one they have in Australia,” he said.

“Because no major party has ever governed alone they need partners, so they’ve built a constructive relationship with The Greens.”

Warning this may come as ‘a culture shock’ for Australian punters, the two parties over the ditch get along so well, they even fix each other’s signs out on the campaign trail, he said.

“If a Labour team are out campaigning and see a Greens poster fallen down, they’ll put it back up again,” he said.

There are three main things to watch on election day said, Professor Shaw.

“Does Ardern get to govern alone? Can Collins prevent a complete meltdown for the Nats? Do The Greens make it over the threshold with 5 per cent of the party vote or one constituency seat.”