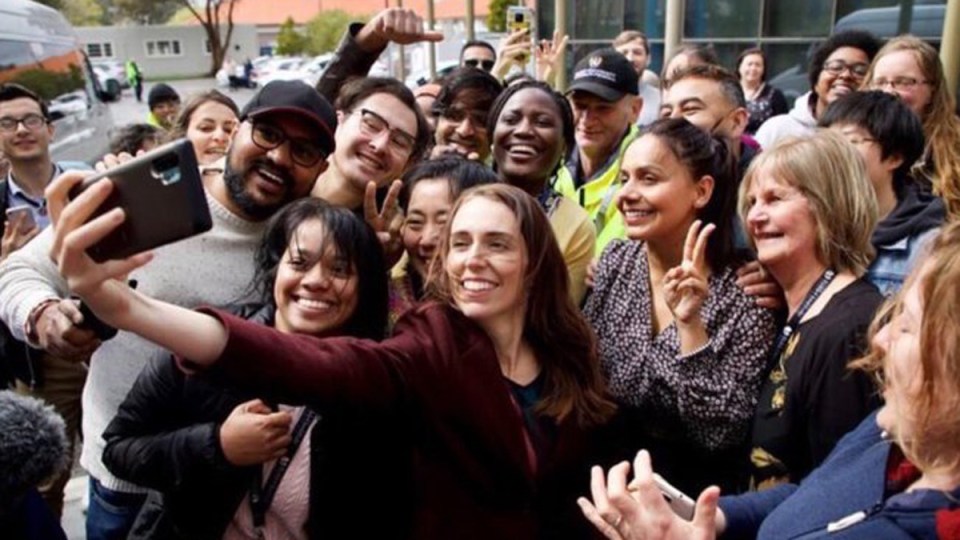 Jacinda Ardern is in hot water after this breach of her own COVID rules on the campaign trail. Photo: Twitter

The Labour leader was spotted through the windows of a laboratory at Massey University at Palmerston North on Thursday last week while on the campaign trail.

As she left the building she was flooded by a crowd of excited students.

Ms Ardern initially called for the crowd to back away but soon embraced the mob and took a photo with them.

She admitted her mistake in Auckland on Monday, while also announcing the rollback of COVID-19 restrictions.

“All the way through on the campaign trail and even before during alert level settings, I work really hard not to shake people’s hands,” she said.

“I sanitise. I wear my mask in Auckland, and I work hard to try to keep my social distance.

“In that particular photo I did make a mistake. I should have stepped further forward. I should have asked them to step apart from each other, and I acknowledge that.”

COVID rules have presented a unique challenge for New Zealand’s politicians ahead of the October 17 election.

Deputy PM Winston Peters, who entered parliament in 1979, said the restrictions made for “the worst campaign environment” that he has been involved in.

Ms Ardern pointed out that the restrictions weren’t aimed at dampening campaign efforts.

“None of our decision-making around these alert levels, actually are based on the politics or the campaign,” she said.

Also on Monday, Ms Ardern’s cabinet met and decided to ease virus restrictions imposed after the country’s second outbreak. Most of the country will move to alert “level one” settings at midnight (local time) on Monday.

Under the changes, gathering sizes will no longer be capped in most of New Zealand.

However, for 1.6 million Aucklanders, such freedoms will have to wait another fortnight.

“We are in a strong position to make our next move down our alert settings,” Ms Ardern said.

After 102 days without a case of COVID-19 in New Zealand, the country’s biggest city was the centre of a fresh outbreak in August.

A 16-day lockdown contained case numbers in the cluster to 178 people and three deaths.

On Monday, director-general of Health Ashley Bloomfield confirmed that no cases had been linked to the Auckland cluster for seven days, but recommended social distancing rules remain.

Ms Ardern said the government would decide on October 5 whether to ease Auckland’s restrictions, based on whether case numbers stay “on their current trajectory with no surprises”.

Such a shift would occur from October 8.

A man returning home from India tested positive for COVID-19 after completing his 14-day isolation and testing negative twice.

He subsequently passed the virus on to two family members in Auckland.

Health authorities suspect an abnormally long incubation period, or that he may have caught it on a domestic flight. Fellow passengers on that flight have been ordered into self-isolation.

“In terms of how the man became infected, that is still under investigation and we are keeping an open mind,” Dr Bloomfield said.

Dr Bloomfield’s team have still yet to identify the source of August’s Auckland cluster, despite promising to reveal it.