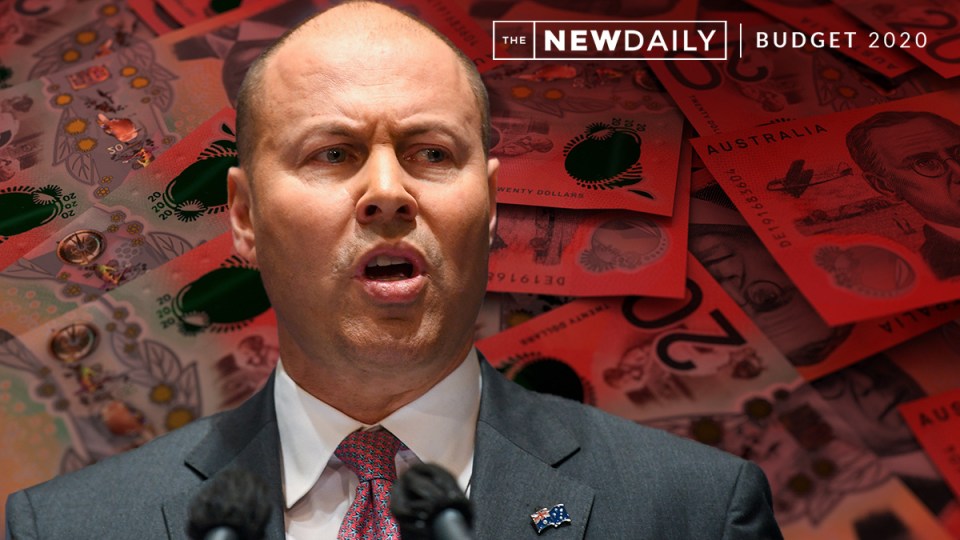 Federal Labor said the budget failed to help those most affected by the pandemic. Photo: TND

The Coalition will look to rush billions of dollars in tax cuts through Parliament as early as Wednesday, amid criticism that its big-spending, pandemic-era budget fails to do enough for those most affected.

“The budget will rack up a trillion dollars of debt but still doesn’t do enough to create jobs, fails to build for the future and leaves too many Australians behind,” Labor’s Jim Chalmers and Katy Gallagher said.

Tuesday’s key figures – including a $213.7 billion deficit, gross debt rising to $1.106 trillion next year, and an expected unemployment rate of 8 per cent in December – have startled many, but the government has maintained a big-spending budget was vital to stave off an even bigger economic crash.

Centrepiece policies include a wage subsidy for employers hiring young people currently on JobSeeker, a $1000 one-off tax cut for low-and middle-income earners, a permanent cut for those on incomes above $100,000, and a big spend on mental health.

But critics have already blasted the government for ignoring extra unemployment support for the hundreds of thousands of people who will remain out of work past December, when the coronavirus supplement to JobSeeker is due to end and the payment will revert to its pre-pandemic rate of $40 a day.

‘No plan’ for big issues

Despite a number of measures aimed at restarting the economy, Mr Frydenberg has been criticised for shortcomings in critical areas like social housing and homelessness.

Australia needs leaders with a plan for the future.

Dr Chalmers and Senator Gallagher, the opposition shadow treasury and finance ministers, were quick to call out a lack of vision for social policy, claiming it would make the current recession “deeper and longer than necessary”.

“There is no plan to lift the permanent rate of JobSeeker from $40 per day, tackle insecure work, create opportunities for women or to improve access to child care,” the pair said.

“No plan for social housing, cheaper and cleaner energy, or to address the crisis in aged care. No plan to kickstart the economy, boost productivity, increase participation, or lift the speed limit on growth.”

Mr Frydenberg said a range of budget policies including the tax cuts, enhanced business asset write-off, and research and development funding would be introduced into Parliament on Wednesday. He said he hoped to pass them quickly, to get tax cuts into people’s hands as soon as possible.

Labor has not yet signalled whether it will support the bill, but previously waved through the stage 2 tax cuts in 2018 and has said it supports the general plan.

On Monday, Dr Chalmers said Labor had “an open mind to tax cuts for workers on low and middle incomes”.

Mr Bandt claimed the jobs plan did not go far enough, and would create “a ‘lost generation’ of young people, while actively making the climate crisis worse”.

“JobMaker will fuel insecure, low-paid work by throwing money at big corporations if they hire part-time workers on minimum wage. McDonald’s will be rubbing its hands together, but it gives zero job security for anyone trying to rebuild their lives,” he said.

“Tonight’s budget is a middle finger to the millions of people who are unemployed or under-employed right now, including more than half a million young people. Budgets are about choices, and this one makes all the wrong ones.”

Independent MP Zali Steggall said “it is time to be brave and bold and secure our economic future” but that the budget delivered “spending on ‘business as usual’ measures”.

Outside Parliament, charities and housing organisations reacted with dismay to the lack of announcements on homelessness and welfare.

Homelessness Australia said the budget cut $41 million in funding and would see “tens of thousands of Australian families” sleeping rough.

“Tonight’s budget is devastating. In a year with huge increases in unemployment creating a surge in rental stress and homelessness, the federal government has chosen to slash homelessness funding,” chair Jenny Smith said.

“Without increases in social housing and with even less resources for homelessness services, many families will become stuck in homelessness for a long time.”

The budget contained $1 billion in “low-cost finance to support the construction of affordable housing”, but economists and social advocates had been calling for the funding of some 30,000 new social housing projects – to not only tackle homelessness, but to create work in construction.

Mission Australia claimed there was a “shocking failure” to address homelessness, and slammed the “baffling silence” on welfare payments.

“Turning back to $40 a day from 2021 would be a disaster for so many people around Australia,” CEO James Toomey said.

“While the budget provides some glimmer for hope on jobs for young people, it comes as a crushing letdown for many others without paid work,” she said.

Dr Goldie backed the JobMaker wage subsidy, but called for it to be extended to apply to all people who had been on welfare long term, not just under 35s.

Claire Victory, national president of the St Vincent de Paul Society, said the budget targeted people who were already comfortable, and overlooked the plight of low-income Australians and others who do not pay tax.

Federal budget 2020: Coalition slammed for failing to help those most affected by pandemic