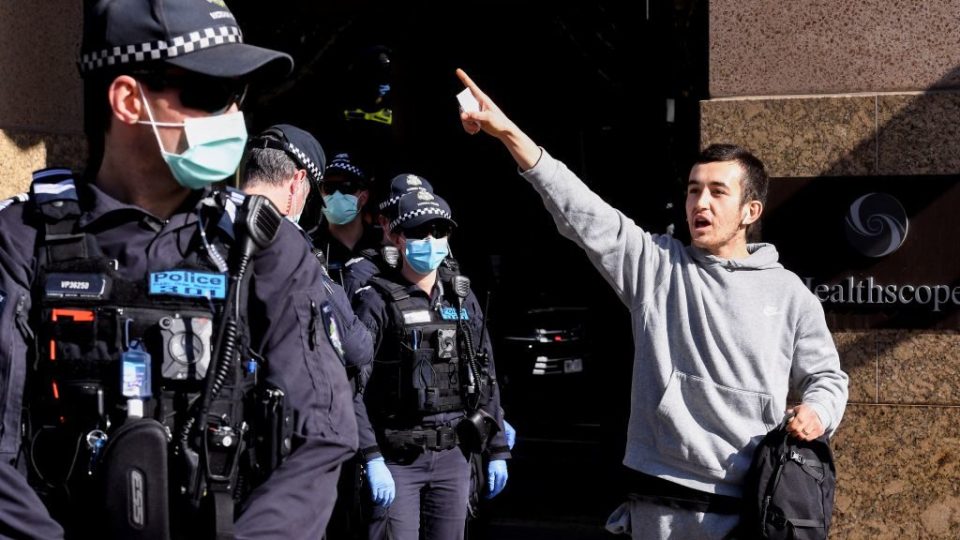 An anti-mask protester shouts at police in Melbourne. Photo: Getty

Emboldened by the coronavirus crisis, the movement is disobeying public health orders and trying – usually in vain – to outsmart authorities.

Victorian Police called out such types on Tuesday, saying officers have been forced to smash multiple car windows after people identifying as ‘sovereign citizens’ refused to follow orders.

“I liken them to Monopoly. They believe they’ve got a ‘get out of jail free’ card, but they make up all the other rules themselves,” Dr Mat Marques, a lecturer in social psychology at La Trobe University who studies conspiracy theories, told The New Daily.

What is a sovereign citizen?

According to the Southern Poverty Law Centre, which studies extremism and right-wing ideology, sovereign citizens “believe that they – and not judges, juries, law enforcement or elected officials — get to decide which laws to obey and which to ignore”.

“At some point in history, sovereigns believe, the American government set up by the founding fathers – with a legal system the sovereigns refer to as ‘common law’ – was secretly replaced by a new government system based on admiralty law, the law of the sea and international commerce,” the SPLC said.

Similar to conspiracy theories around 5G and the QAnon movement, some Australians have simply transplanted the American-centric belief system Down Under, believing they are immune to Australian laws.

“Sovereign citizens are people that don’t buy into our legal framework, our system of government,” Detective Superintendent John O’Reilly, commander of the NSW Police counter-terrorism squad, told the ABC.

They “operate outside the law and outside our tax system”.

The sovereign citizen movement is not new, Dr Marques said, tracing its roots to tax protesters and anti-government agitators in 1960s America.

Australia has a rich history of anti-authority movements, but the new rules and restrictions during the COVID crisis has activated believers.

“Prior to the pandemic, they were people who would try not to pay taxes or take up time in courts fighting parking tickets, but now they’re energised about liberties like wearing masks and health orders,” Dr Marques said.

The movement gained prominence in recent weeks, as multiple Australians – mostly in Melbourne – film their interactions with police and retail staff, while not wearing masks or flouting public health orders.

In several videos which have gone viral, the people in question quote legal documents such as the 1215 Magna Carta and various United Nations global frameworks, incorrectly interpreting those documents as giving them the right to disobey police orders.

“They’re trying to sound sophisticated, to sound like a lawyer to argue themselves out of a predicament,” Dr Marques said.

“They’re looking for loopholes in law. They believe in this ancient principle of common law, a hidden law that nobody under arrest has any obligation to stop for police.”

This has been evidenced in Victoria, where police commissioner Shane Patton specifically called out the movement on Tuesday for disobeying lockdown directions.

“In the last week, we’ve seen an emergence of small groups, but nonetheless concerning groups, who classify themselves as sovereign citizens, whatever that might mean. People who don’t think the law applies to them,” Commissioner Patton said.

“We’ve seen them at checkpoints baiting police, not providing a name and address.

“On at least four occasions in the last week, we’ve had to smash the windows of cars and pull people out to provide details because they weren’t adhering to the chief health officer guidelines. They weren’t providing their name and address.”

In one extreme example, it is alleged a woman assaulted a female police officer after she was approached for not wearing a mask, smashing the officer’s head into concrete.

“That’s someone who thinks they’re above the law … It shows how things can escalate from non-adherence,” Commissioner Patton said.

Australia has a number of notorious sovereign citizen personalities, including several who regularly broadcast videos online giving people instructions on how to skirt parking tickets and taxes.

Many followers film their interactions with police and authorities while using these tips – where they, almost invariably, still receive penalty notices anyway – to the same Facebook groups.

Dr Marques theorised the growing trend of people recording their failed legal tête-à-têtes with police is about feeling part of a community.

“It’s easy to dismiss them as ‘COVIDiots’ or dumb people, but I suspect there’s an element of attention seeking, of enjoying having ‘special knowledge’ as enlightened people that others don’t have,” he said.

“In a pandemic, when many are experiencing great anxiety and a sense of powerlessness, it’s providing these people answer to the chaos.

“But most people are resolving lockdowns or working from home quite differently to these sovereigns.”