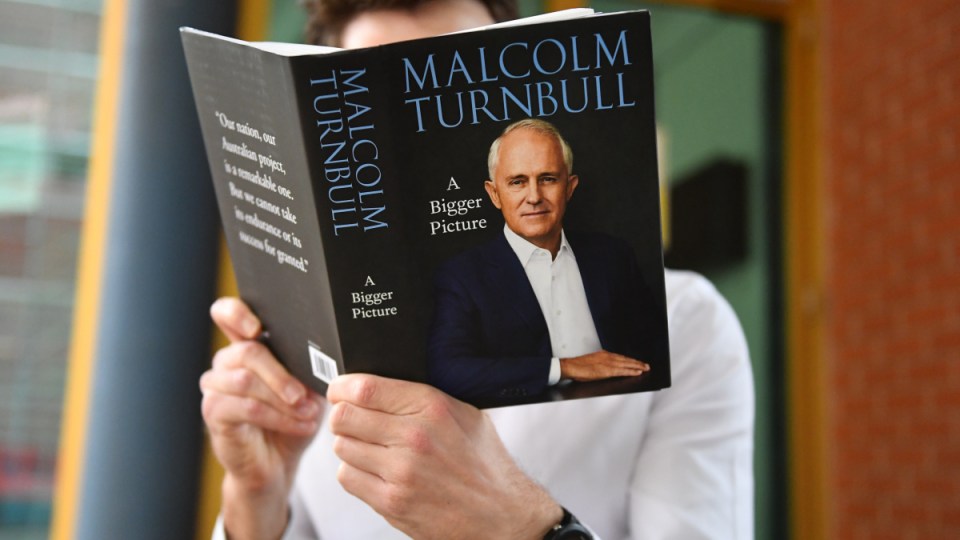 A journalist reads a copy of Malcolm Turnbull's book in Canberra on Monday. Photo: AAP

According to Malcolm Turnbull his successor as Prime Minister is a master of the dark arts of political skulduggery but it is not these skills that Australia will need if Scott Morrison is to lead the nation out of a deep coronavirus-induced recession.

What may be of some use is Mr Turnbull’s view in his just-released autobiography A Bigger Picture that Morrison is “a professional politician who understands marketing and messaging better than most”.

Good communication, after all, is essential in any leader trying to build support in an electorate battered by  rising unemployment and diminishing national and personal prosperity.

However, the indications are Mr Morrison is all over the ship when it comes to what sort of messaging he will need to deliver a recovery plan voters can believe in.

He says he wants a “business-led recovery” rather than a government-imposed one.

Already he has begun wheeling out the prospect of corporate tax cuts and  workplace reforms that sound suspiciously like a reheating of the old neoliberal agenda.

That’s the one that, even before the virus smashed the economy, was not delivering the promised economic growth or lifting wages.

It is also the policy that saw businesses pocket the tax cuts they had already received, rather than pass them on in higher wages or new investments.

Still Mr Morrison’s stated vision of  “a business economy, growing employment-friendly policies on the other side of this” is music to the ears of the business lobby and for unions an ominous echo of a WorkChoices free for all eroding workers’ rights.

But before the free marketeers get too excited, they should read the chapter in the Turnbull book where he details how Treasurer Morrison “unfortunately nobbled any chance of GST reform becoming a reality by front-running policy options in the media”.

To the fury of Finance Minister Mathias Cormann and Turnbull, the treasurer “time and time again he’d float ideas on the front page and monitor the public reaction before determining whether it was good or bad policy”.

Apart from his evangelical social conservatism Mr Morrison is a policy-free zone, looking primarily at what gives the most likely political advantage ahead of the broader national interest.

His ditching of negative gearing reform is a good example.

Had Mr Morrison as treasurer trimmed some of the excesses he spoke of in this generous tax concession many ‘mum and dad’ investors may not have been so ready to negatively gear investment properties.

These voters are now being hit hard by the falling property market and the inability of tenants to pay rent.

Mr Morrison unwisely held out the prospect of “snap back” a couple of weeks ago, sure he wishes it could be true, but nobody believes this is in any way feasible.

So what are the government’s plans for the multibillion-dollar JobKeeper and JobSeeker programs after September?

One thing is certain Mr Morrison will not have to “front-run” in the media what the public would think if they are terminated in a deepening recession.

The electoral clock is ticking down and if the analysis of the Grattan Institute is right, another 1.5 million job losses will be added to the 1.9 million already gone in the shutdown should there be a second wave of infections.

No PM or government could survive that sort of cataclysm, especially if it is seen to have been mostly responsible for it.

It would make the pressure the government is so far resisting over the 15,000 jobs at Virgin look like a minor stoush.

It’s a tough time to be Prime Minister, but Malcolm Turnbull makes a compelling case that Scott Morrison schemed and plotted for it.

So far in this crisis he has been making a fair fist of it, but the bigger test is still to come.