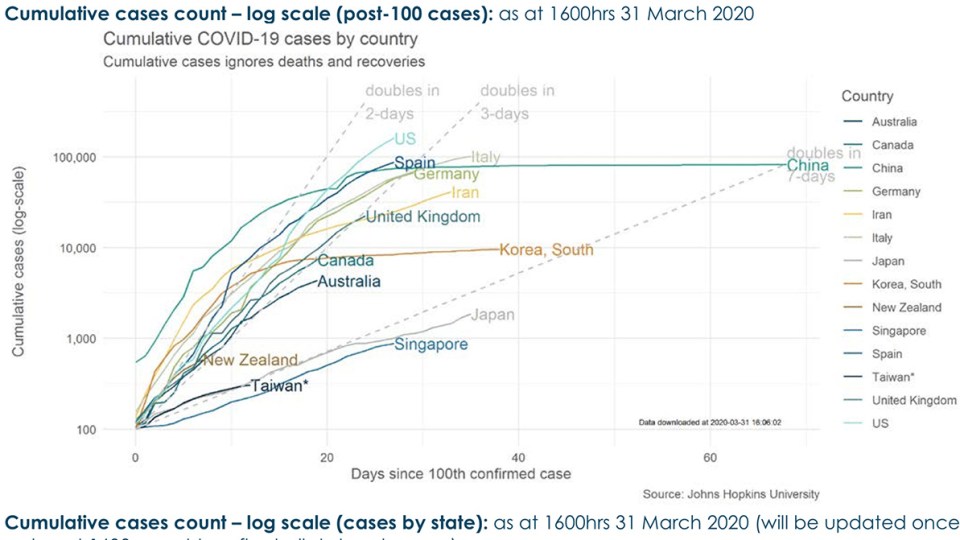 Australia’s medical experts have urged the nation’s political leaders to put the economy into a once-in-a-century coma with one goal in mind: Flattening the curve of COVID-19 cases.

Now, there is fresh hope that these graphs offer the first real evidence that measures to lock down entire cities and ban international travel in Australia are working.

The real question is how long will Australia need to maintain such measures given the devastating impact on jobs and businesses across the country?

And, are we still dramatically underestimating the number of cases in Australia because of current limits on testing?

There were 5315 cases of COVID-19 on April 2, while recent decisions to expand the number of people tested could still see cases spike in the coming days.

But there’s promising early signs that the majority of cases are still being imported on international flights, one reason why the national coronavirus cabinet has gone so hard on locking down travellers, including Lara Bingle’s mum, in hotels across Sydney patrolled by the army and police.

Some early cautious positive signs of the curve beginning to flatten thanks to the extraordinary work of Australians – much more to do but we are focussed on containment to bring the rate down, and building capacity with 30,000 new beds and 57,000 nurses https://t.co/nvifaaQYCX

“We are seeing what I would describe as early promising signs of the curve flattening,” Health Minister Greg Hunt said this week.

“Whilst we are making progress, and whilst we are now flattening the curve in the first early stages of progress, there’s more to do.

“The new measures we have just put in place, we hope will deliver more benefit.”

Flattening the curve means slowing down the rate of infections.

It’s a strategy designed simply to help hospitals manage the flow of cases, so that they don’t overwhelm intensive care units to the point that doctors run out of respirators to help the sick breathe.

Overseas, most of the countries that have seen high rates have simply had so many cases that they could not all secure appropriate medical care.

Even before Prime Minister Scott Morrison ordered a ban on gatherings of 100 people, quickly followed by smaller and smaller gatherings before arriving at the ‘three is a crowd’ rule on Sunday night, it was the death rate in Italy that alarmed medical experts.

Images of empty stadiums full of coffins and trucks transporting the dead in Italian streets shocked the world.

But this graph of the death rate among COVID-19 cases shows that Australia’s is performing much better than Italy, Spain and the United States.

As you can see, Australia’s cumulative deaths is more in line with Japan and Singapore, countries that are regarded as managing the COVID-19 crisis well.

Spain and Italy are further along than Australia in fighting the virus, but the death rate is much higher.

Once the national cabinet moves to relax the prohibitions on pubs, cafes and gatherings there is real concern that cases could spike again forcing another round of restrictions.

This final graph prepared by the Department of Prime Minister and Cabinet shows the dramatic impact of the policy decisions on COVID-19 have had on the movement of citizens, using mobile phone data.

Although the Prime Minister has dismissed the idea of using this data to track citizens who are supposed to be in quarantine as not appropriate in Australia, he has not shied away from backing laws that have prompted police in Sydney to move on sunbathers this week enjoying the sun in parks.

This graph shows the majority of Australians are playing by the rules.

Mobile phone data on people’s movement starts dropping as soon as the government introduced limits on gatherings, first on groups of 500 or more before it became a ban on gatherings of 100 or more just days later.
But the curve flatlines after the introduction of Stage 1 restrictions on businesses which shut down pubs, clubs and cafes on March 22.

If Australia can keep flattening the curve we could emerge as one of the few good news stories in the COVID-19 crisis, but the impact on the economy and jobs could last for years.

Is this proof that Australia is flattening the coronavirus curve?