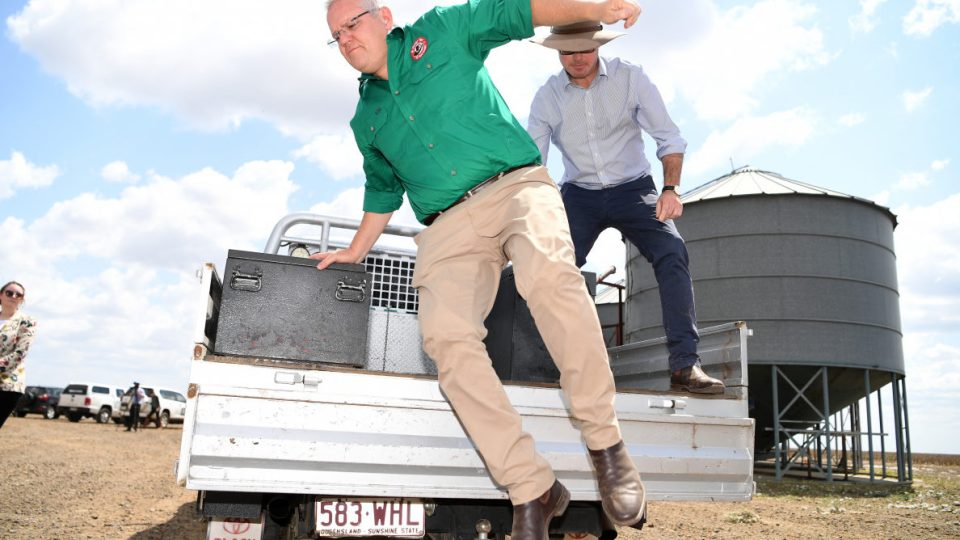 Scott Morrison jumps off the back of a ute during a visit to farms in Queensland on Friday. Photo: AAP

The federal government’s response to drought is looking more like the shimmering mirage you get on a hot sunny day across hectares of dust-bowl paddocks.

The chimera is in line with the Prime Minister’s defence of Australia’s climate inaction policies at the United Nations late last week.

That speech was to put the record straight because “people have a prejudiced view about what Australia’s actually doing”.

Those “people” apparently include the United Nations Secretary-General Antonio Guterres and the vast majority of scientists who make up the Intergovernmental Panel on Climate Change.

The PM inferred they were getting it wrong by reading media reports, though he baulked at describing these reports as “fake news”.

Probably because in Donald Trump’s America most of the things the president condemns as “fake” are too close to reality for his comfort.

Mr Morrison hot-footed it to the parched Darling Downs town of Dalby on Friday immediately on his arrival back in Australia after a triumphant week in the thrall of Mr Trump.

Again “people” – this time the coalition’s core bush constituency – were showing signs of being unimpressed with the expensive shambles masquerading as drought policy.

In Dalby the PM was very keen to answer the social media campaign going viral in the bush asking “Scott Morrison where are you?”

Just where the $7 billion comes from and where it is going is, according to Labor’s Joel Fitzgibbon, not fooling farmers.

The Future Drought Fund is $5 billion – that’s $100 million a year from next July that is earmarked for drought research, review of farming methods and the like.

All worthwhile, but Mr Fitzgibbon says not one cent is immediately going to farmers.

The other $2 billion is in concessional loans, which give farmers the ability to shuffle around their debt but not alleviate it.

It all smacks of political expediency and ad hocery, made worse by the Abbott government’s dismantling of the 2012 intergovernmental agreement for a radical overhaul of drought policy and response in the Earth’s driest continent.

In its place is crude pork barrelling so beloved of the Nationals that it is losing some of its old potency.

Who has ever heard of a shire council blowing the whistle on a government’s misdirected largesse?

That’s exactly what has happened in the Shire of Moyne in south-western Victoria.

It received $1million from the federal Drought Communities Program Extension.

It didn’t ask for it and, according to Councillor Colin Ryan, the shire is not “60 per cent” in drought as the government claimed that a Bureau of Meteorology map showed.

Neither the Victorian government has declared it, nor does a Bureau rainfall map over the past 17 months show the shire to be drought affected.

The shire, according to Cr Ryan, is “clean and green” and it would like to see the money going “to our northern brothers and sisters suffering in the dust”.

Water Resources Minister David Littleproud has ordered a “forensic audit” because he says “it (allocation of funds) shouldn’t be a politician’s decision, it should be predicated on the best science”.

That’s a principle that certainly hasn’t guided government policy in regard to energy, climate or drought over the past seven years.

Mr Littleproud’s prime minister is not so ready to concede any such thing.

Mr Morrison was Trumpian in his blithe recasting of the shambles.

“If we are being accused of being too supportive, too generous, too much on the front foot in helping rural districts when it comes to supporting them in the drought, well I’m happy to take that criticism.”

Fact check Prime Minister: No one is accusing you of that.