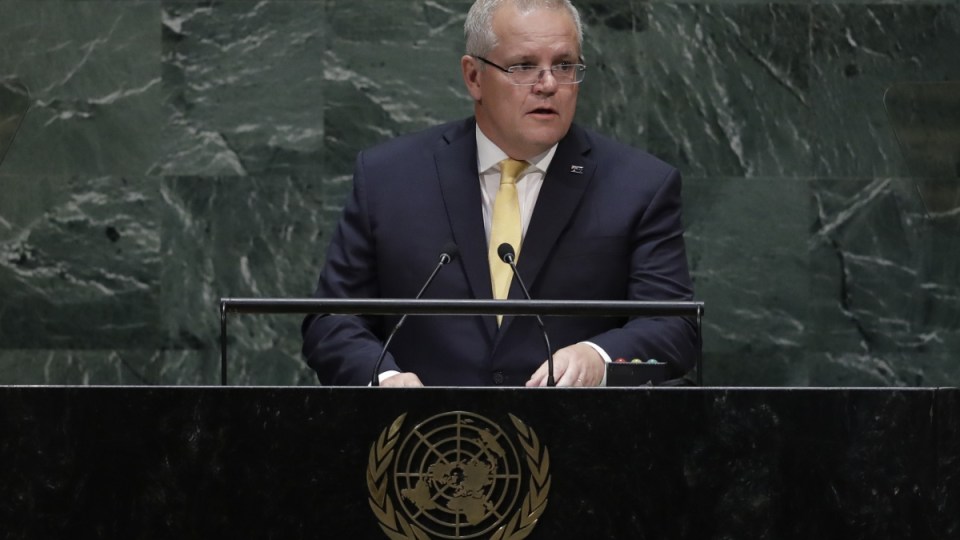 Scott Morrison has accused climate activists and the media of spreading “completely false” information about Australia’s action on climate change.

The Prime Minister focused on Australia’s practical actions on environmental challenges – such as plastics in the oceans, waste management and fishing – in his address to the United Nations in New York early on Thursday.

He said the country was committed to its target of cutting emissions by 26-28 per cent below 2005 levels by 2030, describing that as a “credible, fair, responsible and achievable contribution”.

“Australia’s internal … and global critics on climate change willingly overlook – or, perhaps, ignore our achievements – as the facts simply don’t fit the narrative that they wish to project about our contribution,” Mr Morrison told the general assembly.

Ahead of the speech, the PM said Pacific leaders with whom he spoke were often surprised to learn what Australia was doing on climate.

“Oftentimes the criticisms that have been made about Australia are completely false,” he said.

Asked if he was calling it “fake news”, he replied: “I’m not saying that. All I’m saying is when I’ve spoken to them, they’ve been surprised to learn about the facts about what Australia has been doing.”

He told the UN that Australia would beat its 2020 Kyoto targets and claimed it would also meet its 2030 Paris pledge.

Australian National University climate scientist Nerilie Abram said plastic in the ocean was a serious issue, but that it didn’t take away from the greater issue of climate change.

“[Plastic waste] is something that people can actually see, so I think that makes it seem like a more immediate threat,” she told ABC’s Radio National.

“But we’re already seeing that the oceans are taking a huge hit from climate change.”

Earlier, Mr Morrison was more bullish, saying Australia “won’t just meet our 2030 commitments, I suspect we will hopefully be able to do better than that”.

Under the Paris agreement, all countries are expected to update their pledges to cut emissions at the 2020 climate conference in Glasgow.

But Mr Morrison indicated Australia was unlikely to do so at this stage.

Mr Morrison also confirmed to the UN that Australia would not contribute any more to the global Green Climate Fund.

“I’m not writing a $500 million cheque to the UN, I won’t be doing that. There’s no way I’m going to do that to Australian taxpayers,” he said.