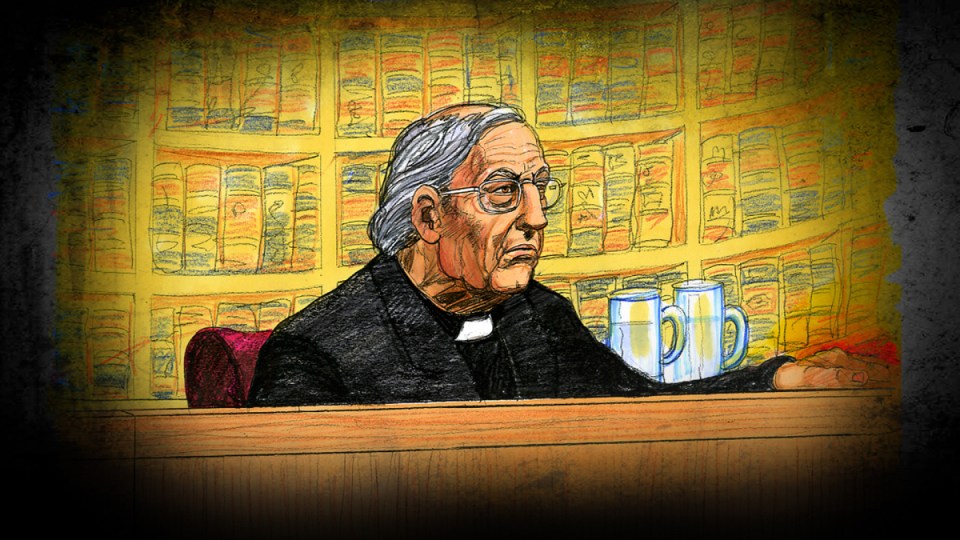 As the hundred-strong crowd cleared away from the Supreme Court on Wednesday morning, advocates of George Pell’s victims went to pop champagne over their victory.

Pell had hoped to walk free that morning, and many people standing outside thought the long row of police was an omen that he would.

But instead he was escorted from the dock in handcuffs, to serve out the remainder of his sentence – after his appeal to overturn a conviction for sexually abusing two choirboys was quashed.

As the dust settled and the throngs wandered off, there was one lone man left breaking the silence.

Wearing a black jacket, with a bald head and a gentle voice, he spoke of his relief as cameras filmed his feet, his back – anywhere but his face.

He was the father of the deceased choirboy who was sexually abused by the then-Archbishop of Melbourne when he was just 13 years old.

The man, who can’t be named, lost his son to a heroin overdose in 2014 and shed tears of relief as the verdict was dismissed.

He has maintained his son’s addiction was linked to post-traumatic stress disorder caused years earlier when Pell sexually abused his boy and another child.

“For myself that was a great load lifted off my shoulders. It’s almost like somebody was massaging my shoulders and a knot came out.

“It’s the best way to describe it.”

Revealing that he had been preparing himself for the worst outcome – Pell walking free – he put his win in court in the context of what he had lost along the way.

“Something must have happened to those boys because my son suffered a lot of torment,” he said.

“And my son, that’s not going to bring him back. But to get a verdict like that is absolutely amazing.”

Braving the rain, survivors of childhood sexual assault and their supporters started lining up by dawn.

They stood next to Pell’s supporters and inevitably, verbal sparring broke out as tensions escalated.

But as the judgment day clock ticked down, the theatrics were rolled out.

Chrissie Foster: “It’s been such a big fight. I’ve been doing this for 23 years. This is a big win, a huge win so we are wrapped.
He’s done the crime he’s doing the time.” #pell pic.twitter.com/Uqp4wTPXkw

Inside the court, it was almost silent as the knife-edge decision (two to one) was readout. In the dock, Pell bowed his head.

Outside, there were cheers of joy.

Advocates raised their fists in the air and some, clearly in shock, asked if it was actually true.

“Pop the champagne … and the holy water,” yelled John Lawrence, a former ward of the state.

“Justice has been done.”

Mr House, who said he came forward as a survivor to ensure his children never suffered a similar fate, tipped his head back in relief before describing the verdict as “a win for the world”.

“It’s wonderful. It’s one of the most wonderful days of my life. It upholds hope for all survivors and even those who haven’t come forward. We are vindicated today,” he said.

“This is a day for people who took their lives at their own hands, those who languish in mental institutions, those who came before us. We hold them in honour.”

As people poured out of the courts, the street turned into chaos.

Journalists surrounded campaigners and advocates weaved through the crowd to find each other, passing out chocolate bars along the way.

Michael Advocate, a sexual assault survivor who goes by a pseudonym, grabbed a megaphone to decry that Pell could “burn in hell”.

“George Pell can now rot in hell. He can burn in hell and he can rot in his jail cell,” he said.

Meanwhile, some of Pell’s supporters said the verdict only made them stronger.

Karen Baxter loudly protested that the man who had once been Australia’s most powerful Catholic was innocent.

“Are you telling me a 50-, 60-year-old man could have it off with a boy and run back in time?” she said before likening the case to that of Lindy Chamberlain.

As she continued talking she pointed the finger at Valda Ann Hogan, whose brother was molested by members of the Catholic Church, and said: “You are picking on him because he’s a priest.”

“You’re delusional,” spat back Ms Ann Hogan, who was wearing a pink cap with the words ‘guilty’.

Julie Cameron, an advocate for victims of child sexual abuse, held a Bible in the air as she told reporters “The biggest protected pedophile ring in the world is busted” before breaking down in tears and running into the crowd.

It was clear their celebration was mixed with sadness.

Leonie Sheedy, chief executive of the Care Leavers Australasia Network, acknowledged that for her and many others the day was bittersweet.

“This verdict is good for people, but there’s also a deep sadness that so many perpetrators have gotten away with crimes.”

‘Pop the champagne … and the holy water’: Cheers and sadness after Pell appeal verdict