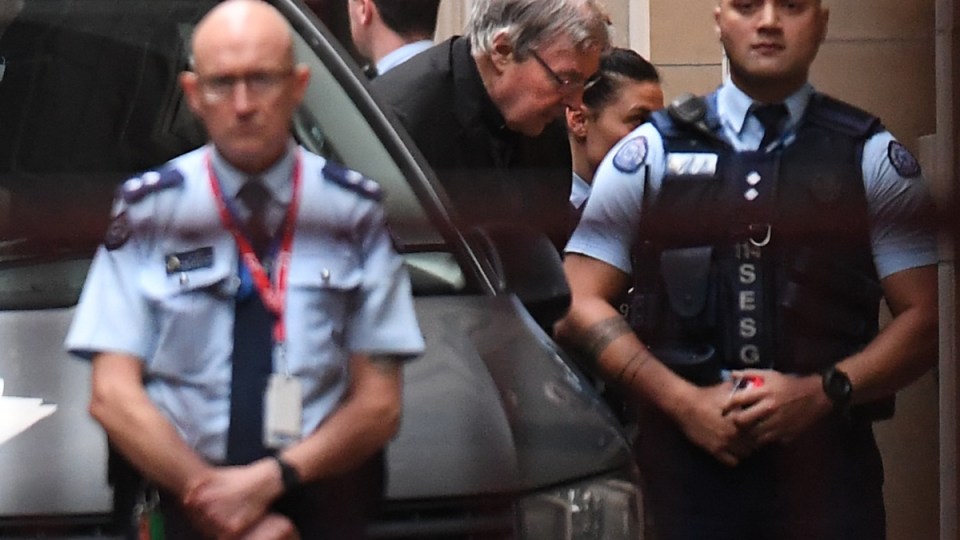 The High Court will decide on the outcome of George Pell's appeal this week. Photo: AAP

Cardinal George Pell arrived at court on Wednesday surrounded by armed guards for an dramatic legal showdown in his bid to be freed from jail.

The 77-year-old, who was sentenced to six years in prison in March for violent assaults against two choirboys at Melbourne’s St Patrick’s Cathedral in the 1990s, was escorted into Court 15 for the start of his two-day appeal hearing.

His specialist appeals barrister, Bret Walker SC, argued Pell’s conviction for child sex attacks was “unsafe”, and that timing surrounding the alleged events and Pell’s alibis were key factors in proving the jury had erred.

Mr Walker said Pell was at a “forensic disadvantage” as witnesses could not precisely remember dates due to the length of time since the 1990s.

“We will point to material that gives rise to the piled up, piled up impossibility,” he said.

Addressing the appeal judges – Supreme Court Chief Justice Anne Ferguson, Justice Chris Maxwell, the president of the Court of Appeal, and Justice Mark Weinberg – Mr Walker argued there were 13 obstacles in the path of a conviction.

The most “obvious feature” of the “unsatisfactory” guilty verdict was the lack of witnesses to the alleged crimes, he said.

Regarding the first incident in the sacristy after Sunday mass in 1996, Mr Walker said it could not have happened in the busy area: “No one else, apart from the victim or the perpetrator, was in that room for five or six minutes.”

Earlier in the hearing, Mr Walker went on the attack, arguing that it was physically impossible for Pell to have been in the sacristy at the time of the first attack.

“If he was at the western door, then the law of physics means this is literally and logically impossible for the offending to have occurred,” he said.

Pell, the former treasurer for the Vatican, has always strongly denied committing the crimes.

On Wednesday, he wore a black suit and shirt with his white clerical collar, noticeably missing at his sentencing hearing, back in place.

Pell looked at Mr Walker as the lawyer said there was reasonable doubt over the conviction because of strong evidence the Cardinal was always accompanied by staff after mass.

Mr Walker also argued it would have been impossible for two choirboys to go missing from the procession, saying it was “a bit like soldiers in full uniform leaving their regiment”.
Justice Maxwell then suggested staff at the cathedral had the job of “herding” the choirboys.
“They are not cats, they’re choirboys,” Mr Walker said.

The barrister, regarded as one of the best in his profession, argued the dates of the attacks on the boys were uncertain. However, he made it clear he had no complaints about the summing up by trial judge Peter Kidd.

Pell, who has been in solitary confinement at the Melbourne Assessment Prison for the past 97 nights, leaned on the dock and took notes as the hearing unfolded. He will be eligible for parole after three years and eight months.

His brother David, niece Sarah and other relatives watched from the front row of the court, which was packed with media.

During breaks in the hearing, Pell was not allowed to mix with family or friends. Instead, he was taken out through a back door by armed guards.

Victim advocates, including Chrissie Foster, were also in court, alongside law students and the public.

Advocate Chrissie Foster has joined the queue outside the Supreme Court for the first day of the #cardinalpelll appeal pic.twitter.com/croM4j2VFR

Viv Waller, a lawyer for the father of one of the choirboys, who died in 2014, issued a statement saying he was nervous about the appeal but relieved it had started.

“Understandably, he is feeling really anxious knowing that George Pell’s conviction could be overturned. But he is extremely hopeful that is not the case,” she said.

Katrina Lee, executive adviser for the Archdiocese of Sydney, sat in front of Jesuit priest Father Frank Brennan and Peter Westmore, the former head of a Catholic lobby group set up by the high-profile anti-Communist B.A. Santamaria.

The prosecution’s response to the appeal is led by senior crown prosecutor Christopher Boyce and Mark Gibson, who led the trial, and Angela Ellis.

Earlier, Justice Ferguson, revealed in her opening remarks that the judges had visited St Patrick’s Cathedral and also examined photographs, transcripts and documents.

“In reaching our decision, we will have regard to the whole of the evidence,” she said.

The hearing is expected to last two days. The judges’ decision will be handed down in the coming weeks.

Investigative journalist and writer Lucie Morris-Marr has covered the entire Pell case for The New Daily. Her forthcoming book, Fallen – The inside story of the secret trial and conviction of Cardinal George Pell, will be published by Allen & Unwin in September.