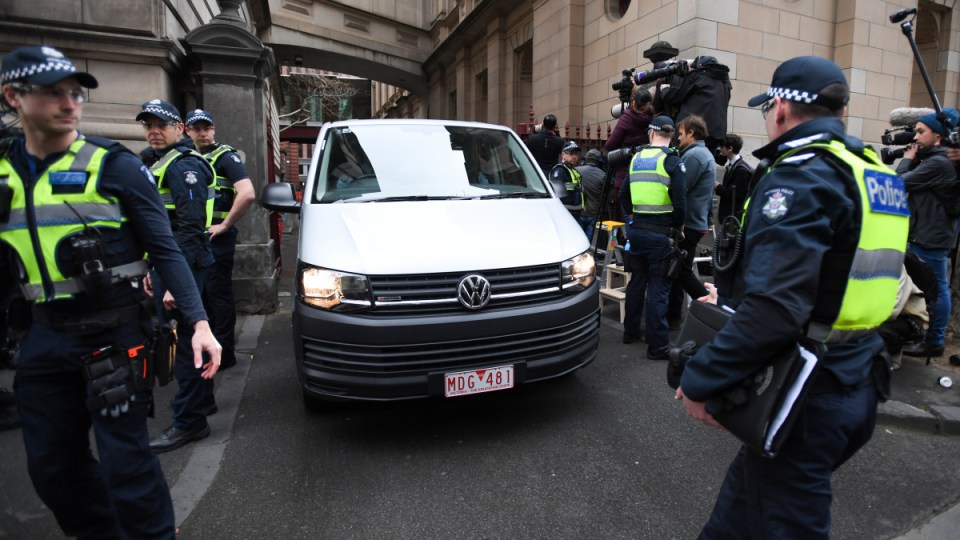 George Pell was escorted into the courthouse amid heavy police security. Photo: AAP

Cardinal George Pell looks set to take his bid for freedom to the High Court after losing an appeal to have his shock conviction for sexually abusing two choirboys quashed on Wednesday.

Pell will remain in jail and is not eligible for parole until October 2022 after the three-judge panel of Victorian Supreme Court rejected the appeal 2-1 and upheld his six-year sentence.

The former treasurer to the Vatican gripped the dock with his hand and looked at Chief Justice Anne Ferguson as she announced he’d lost his bid.

Prime Minister Scott Morrison told a media conference that Pell would be stripped of his Order of Australia Medal in the light of his unsuccessful appeal.

It later emerged that Governor-General David Hurley would not take actions to revoke the honour until after a potential High Court challenge is resolved.

Pell’s legal team have indicated he will appeal against his conviction and has 28 days to lodge an application with the High Court. 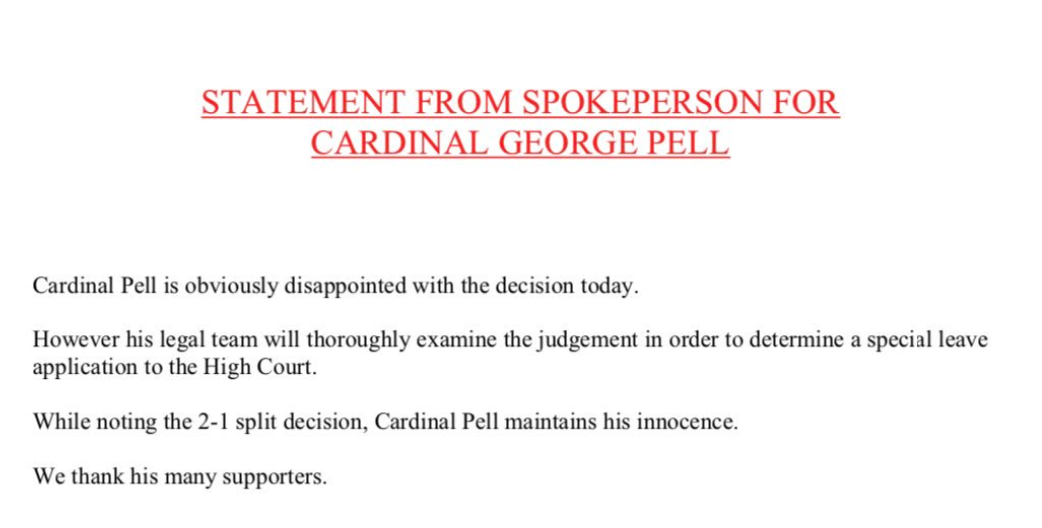 Legal sources have told The New Daily that the unequivocal nature of the Supreme Court appeal rule meant it would be difficult to argue a successful application.

The Vatican later released a statement reiterating its respect for the Australian judicial system, but noting that Pell maintains his innocence and right to appeal to the High Court.

It said the Holy See was committed, through “the competent ecclesiastical authorities” to pursuing members of its clergy that commit sexual abuse. 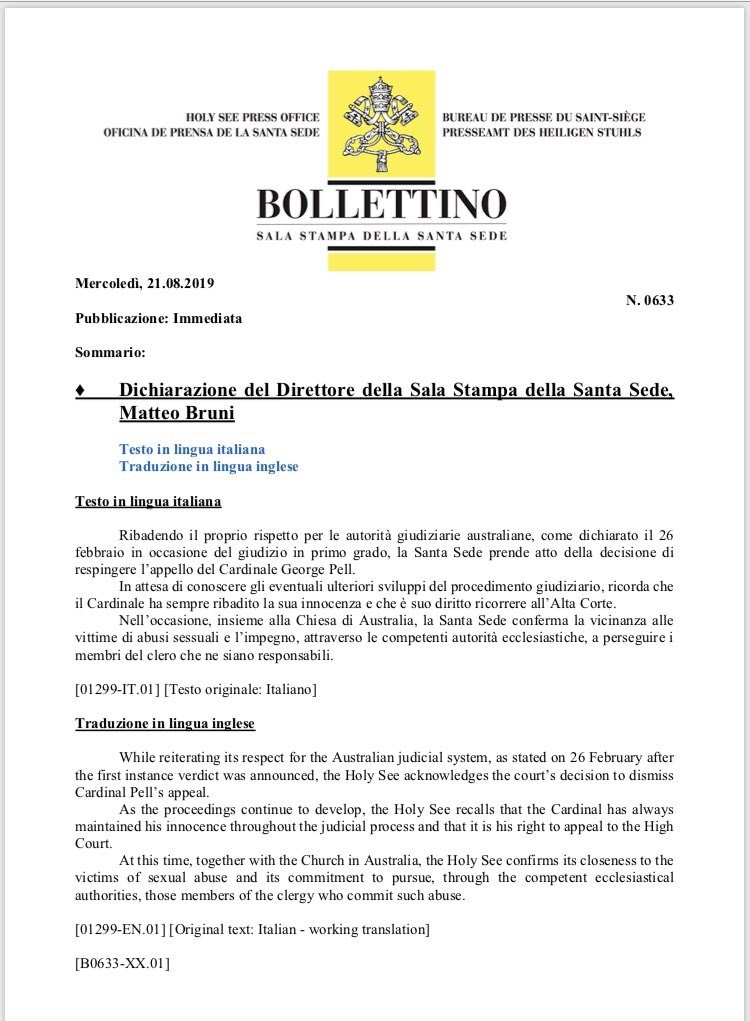 Justice Ferguson made her introductory remarks at 9.30am before handing down the decision to uphold the convictions with her two fellow judges – Justice Chris Maxwell and Justice Mark Weinberg – at the Supreme Court of Victoria in Melbourne.

She told the court that the judges decided the surviving choirboy was “not a liar, was not a fantasist and was a witness of the truth”.

Justice Ferguson said she and Justice Maxwell rejected all of the 13 “obstacles” to the crimes being able to be carried out by Pell as presented by his legal team in his appeal bid.

They also said his heavy robes were indeed capable of being moved or pulled to the side to carry out the first violent attack in the sacristy.

In the summary of the decision, the judges said there was “nothing about the complainants evidence” that meant the “jury must have had a doubt”.

Justice Weinberg was the dissenting judge and found that at times the surviving choirboy was “inclined to embellish his account”.

He also found that the witness’ evidence regarding the second attack in the corridor seemed “concocted”.

The cardinal, who sat in the dock wearing a black suit and his clerical collar, has spent 175 days in solitary confinement in Melbourne Assessment Prison.

Justice Ferguson said that all three judges unanimously refused leave to appeal to the second and third grounds, which concerned legal rather than factual issues. They stated that it was in fact acceptable that Pell was arraigned in front of the jury via video link.

Listen to the judgment

The judges were scathing about the infamous “PAC MAN” video the defence wanted to play to the jury in an attempt to prove the Cardinal could not have been able to attack the boys at the Cathedral.

“The animation was tendentious in the extreme,” they said in their findings.

“It was plainly intended to implant in the minds of the jury that the complainant’s account must have been impossible.”

Scenes erupted outside the court as the verdict was handed down, with Pell supporters clashing those backing the victims.

Victims and their advocates cheered as they learned Pell would remain behind bars.

The feeling of relief was palpable among the small group holding placards saying “Justice for Witness J”.

Victim advocate and campaigner Chrissie Foster told The New Daily the decision was “hugely significant” for victims of abuse, and that she always believed the jury had been correct in its verdict, having attended much of the appeal herself.

“This is a crime fraught with not getting a guilty verdict,” she said.

“Any rape, by its nature, is done out of sight. There are no witnesses and it’s very hard to prove. But today … well, this result is fantastic – goes against everything.”

The 78-year-old was sentenced to six years behind bars – to serve three years and eight months before being eligible for parole – by Judge Peter Kidd on March 13, 2019.

More than 50 members of the public were in court for the decision, including advocates and Pell supporters.

Katrina Lee, the executive adviser for the Archdiocese of Sydney, took a seat in the front row with several of the cardinal’s friends.

Pell’s younger brother David sat with his artist daughter Dr Sarah Pell, while more than 20 reporters from local and international outlets sat in the media area of the courtroom.

Pell was earlier transported in handcuffs in a prison van to the back entrance of the court amid a heavy police presence.

The appeal hearing itself, which took two days in June, came after the cleric was found guilty by an unanimous jury on five counts of abusing the two boys. An earlier trial resulted in a hung jury last September.

At the appeal, Pell’s Sydney barrister Bret Walker SC, argued fiercely that the guilty verdict at the end of the retrial was a grave error by 12 members of the public.

Investigative journalist and writer Lucie Morris-Marr has covered the entire Pell case for The New Daily.