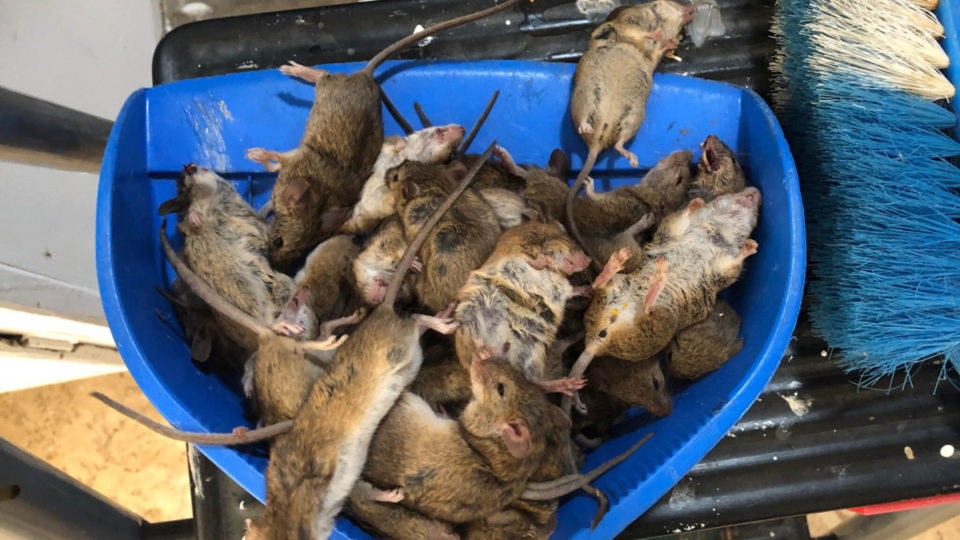 New South Wales farmers are battling a mouse plague. So what's caused it and how will it end? Photo: AAP

At the beginning of autumn every year, in grain country, people living in country towns expect mice to move into their homes.

This is prompted by the cold weather, but also by the wheat stubble being burnt off. Hawks and ravens turn up to eat the roasted mice and lizards as they scurry for safety – and many do escape.

What follows, usually, isn’t a plague. But it’s a pain in the neck. Poison baits and traps are set in every home. Some nights, though, you might see a dozen mice running up a wall.

This is why you keep a broom handy. The shock of the broom hitting the wall is enough to kill off some of your unwanted guests. But there are plenty more nesting under your floorboards.

By the time winter moves in, the mice have been poisoned or killed off by low temperatures.

A plague is an infestation on steroids

It’s a bad old joke to say that Aussie farmers in times of plenty can still find something to whinge about. But they really can, because there’s always something awful lurking in rural parts.

Drought-breaking rain – hurrah! What a relief. Didn’t think it would ever end.

Bumper crops – hurrah! Here’s a chance to pay off some debt, re-invest in the old farmer etc.

Equally excited, though, are the mice – so many of them that farmers have to factor in a certain percentage of crops ruined.

“Mice are crucifying crops of wheat, barley, canola and lupins,” reports The Land about the infestation in districts around Griffith.

The Sydney Morning Herald reports that the big hope of grain growers is to control this furry plague enough “to limit grain loss to less than 100kg per hectare”.

As The Guardian reported: “Australia’s worst plague in 1993 caused an estimated $96 million worth of damage to farm animals, equipment and thousands of hectares of crops. Another plague in 2010-11 affected 3 million hectares of crops across NSW, Victoria and South Australia.”

It’s not just crops. They play hell with livestock, farm equipment and will chew through electric cords and cabling for the sake of exercising their jaws.

Mice are thirsty creatures. They get into water tanks, dozens of them drowning and rotting and contaminating the drinking water.

Then it starts happening in the towns.

This plague is being reported as “the worst” in a decade.

How do they get so out of hand?

Female mice reach sexual maturity at around six weeks of
age and are prolific breeders. They knock out new litters every few weeks. They’re like whiskery popcorn going off. Breeding begins in spring.

As a 2003 report from the CSIRO noted: The length of the breeding season is influenced by food supply and seasonal conditions.

With the arrival of bumper crops, “an extended breeding season can lead to a population explosion in autumn, where up to 1400 mice per hectare have been recorded on the Darling Downs in Queensland.”

The report also noted that mice “impact on the environment during plagues by depleting soil seed banks and reducing ground cover, which can lead to increased soil erosion”.

Why are farmers worried now? When will it end?

Long season (winter) wheat varieties are sown first in April. Which means a lot of seed will be sprinkled in big paddocks starting next month.

The mid-season varieties follow in May and early maturing varieties in June.

All of this is food for the growing mouse population. And a threat to this year’s crops.

Unfortunately, as the CSIRO tells it: most plagues end in July “when food is becoming scarce and cold winter conditions stress the population.”

At the end, the mice are sick and hungry, making them even more susceptible to disease and infection.

“When populations crash, they do so rapidly – over a
period of two days to 2 weeks,” the authors write.

By then, the damage will be done.

They come in good times: The irony of mouse plagues