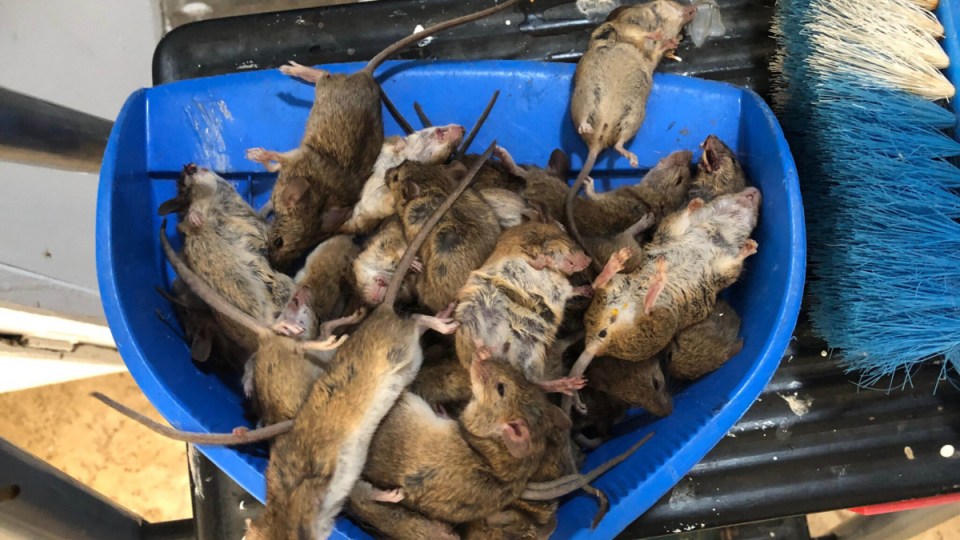 Dead mice at a property in Coonamble, in central west NSW, in February. Photo: AAP

Farmers and others across rural NSW are pleading for help to deal with an escalating mice plague that is threatening their health and winter crops.

NSW Farmers is seeking urgent action from the state government as farmers in many parts of regional NSW report a drastic increase in mice populations.

In a further sign of how bad the plague is, NSW Health has confirmed three patients in regional hospitals had been bitten by mice.

“Reports of residents or patients receiving minor bites have been made … and appropriate treatment has been provided,” a NSW Health spokesperson told the ABC on Thursday.

The stomach-churning extent of the problem is all too clearly illustrated in this video from NSW Young Farmers, posted to social media:

“Farmers need some more control options. We are requesting that an Emergency Use Permit be issued for zinc phosphide to treat seed,” Mr Jackson said on Wednesday.

“This will allow farmers to have their own grain professionally treated, removing the biosecurity risks posed by using foreign seed.

“It will also reduce the cost of sourcing sterilised or de-vitalised grain by farmers using their own treated seed to be sown for winter cropping.”

Norman Moeris, a farmer in the NSW central west, described the plague as “like locusts on the ground” at his property in Gilgandra.

“[The mice] have done a hell of a lot of damage to hay that people were storing for the next drought … silo bags. They are just demolishing them,” Mr Moeris told the ABC.

He said it was important to control the rodents in time for sowing winter seeds.

“[An emergency control program] will save a lot of heartache and mental trauma.”

“The severity of the current plague has resulted in the need for multiple aerial and ground bait applications in cropping regions,” Mr Jackson said.

“Potential options we are putting up include a rebate on rodenticide products or a subsidy for ground and aerial baiting. Action is needed now. This mice situation is only getting worse.”

Mice damage reports were flooding in from farmers and rural communities from the NSW north, south and central west.