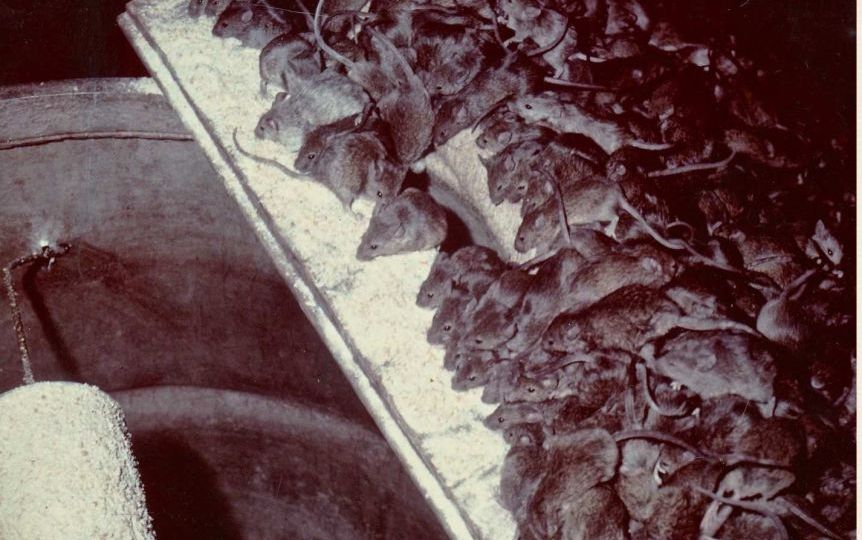 A video from the 1980s has those living through the eastern states’ current mouse plague twitchy about the 2021 pest invasion worsening if weather conditions continue.

John Goldsmith was a cropping farmer at Mullaley in north-west New South Wales during the “worst plague” he had ever endured, in 1984.

It was so bad the locals even renamed the road, connecting Mullaley and nearby Gunnedah, to the “felt highway”.

“They’d get in silos and storage and just make a mess of it, eat it. [They] would literally clean up ahead of the header.

“We’d go to bed at night and put a mouse trap in the kitchen, and you’d wake up with probably three or four mice dead in the one trap!

“The smell through the house was absolutely foul; it was a time you’d want to forget.”

But those memories have stayed with the now-retired farmer who restored the 1984 Channel Nine news clip and shared it to the Facebook page of his video restoration business.

At the time, Mr Goldsmith sought publicity from the media in the hopes of putting pressure on government to help the situation, but never did he think the video would gain traction decades later.

The video was originally shared to social media more than four years ago but in recent days it resurfaced, being watched by thousands, shocked by the extent of the 1980s mouse outbreak.

“I think people are just in awe of what really happened.”

Experts say the current plague, which has blanketed parts of NSW and Queensland, could worsen, with a significant number of females still breeding, which is unseasonal.

“Normally we’d expect to see mice start breeding in the spring and then as the summer dries out … and food starts to deplete, they stop breeding … and then they decline in numbers through the autumn and winter,” CSIRO research officer Steve Henry said.

“This year what we think will probably happen is they’ll continue to breed if climatic conditions remain favourable.”

Mice can breed from just six weeks old and females can have a litter of six to 10 pups every 20-odd days.

“One hundred mice can multiply to 600 mice after one round of breeding – after two rounds of breeding, they’re starting through the roof,” Mr Henry said.

“The chances of mice to continue to breed in the autumn and causing trouble for the sowing of the winter crop are quite significant.”

Mr Henry said the 1984 footage was “really disturbing” and while current numbers have not reached those extremes – likely thanks to a change in cropping systems, reducing soil disturbance – they are causing significant financial impacts to farmers recovering from drought.

“I certainly haven’t seen anything like that in the time that I’ve been working on mice,” he said.

“That, of course, isn’t a guarantee that they won’t get to those kinds of numbers again.”

Mr Henry said some farmers, particularly around Warren and Armatree in the central west, have lost entire summer sorghum crops.

“They baited the mice two or three times, so while we’re not seeing those kinds of numbers, we’re seeing the kind of economic impact that leads to mice being really a significant issue for the rural industry,” he said.

Mr Henry said his phone is “ringing off the hook” with farmers from across NSW, southern Queensland and western Victoria in search of advice, throughout the worst plague in NSW in a decade.

Mr Goldsmith, who lived through the earlier plague, said he has not seen too many mice at his home in Inverell, NSW, this year, but hopes the current plague further west eases soon, sympathising with what farmers and people in town are dealing with.

“What saved the bacon for us at Mullaley all those years ago, [was] the weather suddenly turned wet and cold and the mice just died in the cracks in the ground,” he said.

“You’ve just got to grin and bear it and hope for the best.”