From e-waste to mattresses, X-rays, and soft plastics, consumers are being encouraged to take advantage of a range of recycling programs.

Australia’s recycling industry has been in crisis, with consumers wising up to unsustainable practices.

In 2018 an unflattering spotlight was thrown on the industry when China stopped accepting Australia’s low-quality recycling waste, with other countries, including Malaysia, later following suit.

In some parts of the nation weekly recycling bin services ground to a halt as councils sent recyclables straight to landfill.

Stockpiles of waste were dumped in warehouses, with landlords left to foot the bill as recycling outfits went bust.

The international waste bans exposed the recycling industry’s dirty secret, showing the nation that much of what we thought was being recycled was simply being shipped off to other countries and ending up as garbage.

But the shameful revelations have prompted action, according to Planet Ark’s deputy chief executive Rebecca Gilling.

“The China waste ban in 2018 was the game-changer. It really made it clear to governments and industry in Australia that we really need to manage our waste onshore, rather than shipping it off in in the sort of co-mingled arrangements that we had,” Ms Gilling said.

“A lot of work has been done in the last few years towards building that industry in Australia, and with a lot of support from from governments at federal and state level as well.”

March 18th is Global Recycling Day, with consumers being urged to think before they buy packaged products and educate themselves on their recycling options.

In December federal legislation was passed to formally ban the export of unprocessed waste overseas, and while there’s no co-ordinated national plan some councils have upped their recycling offerings, adding extra bins at the curbside so that households can better separate products and increase the chance that they’ll be recycled.

“Consumers have been demanding it as have recyclers … because it’s a case of garbage in, garbage out,” Ms Gilling explained.

“If you can do much more separating at the curbside, at the household level, then you get a much better and more valuable material at the other end.”

In Victoria, nearly one third of councils are now providing residents with FOGO bins.

The term stands for ‘food organics and garden organics’, and the service allows food and garden waste to go into the same bin with the material then turned into soil products used for agriculture, reducing the amount of waste that ends up in landfill.

Planet Ark has also developed an Australasian Recycling Label to help guide consumers on how to best dispose of product packaging. 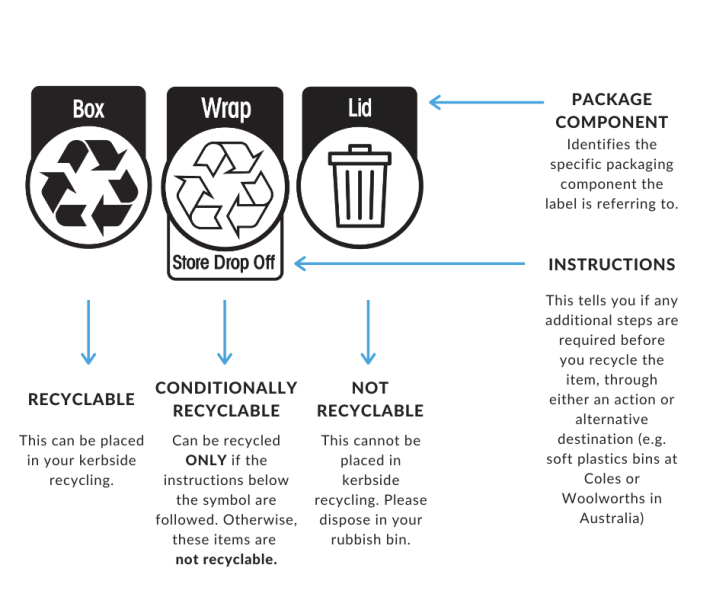 Not everyone thinks recycling is the solution to the world’s plastic waste problem.

Worldwide, only an estimated 9 per cent of plastics are recycled, a figure that rises to 18 per cent in Australia.

This means the vast majority of plastics end up in landfill, the environment, air, and water.

In 2019, a Canadian study revealed that humans could be ingesting 74,000 bits of plastics annually.

Microplastic particles have also been found in zooplankton, bottled water and the fur of polar bears in the Arctic.

According to executive director of The Warren Centre for Advanced Engineering Ashley Brinson the solution is not recycling, but rather phasing out single-use plastic and packaging altogether.

Downcycling occurs when a recycling process creates a material that is lower in quality and functionality than the original product.’

10  household items you can and should be recycling

Planet Ark offers an online tool called ‘recycling near you‘ that allows consumers to plug in their postcode and find out where the nearest recycling facility is for different types of materials.

Here are 10 common items that can be recycled, but often aren’t:

Can recycling solve the world’s plastic waste problem? Here’s what consumers should know