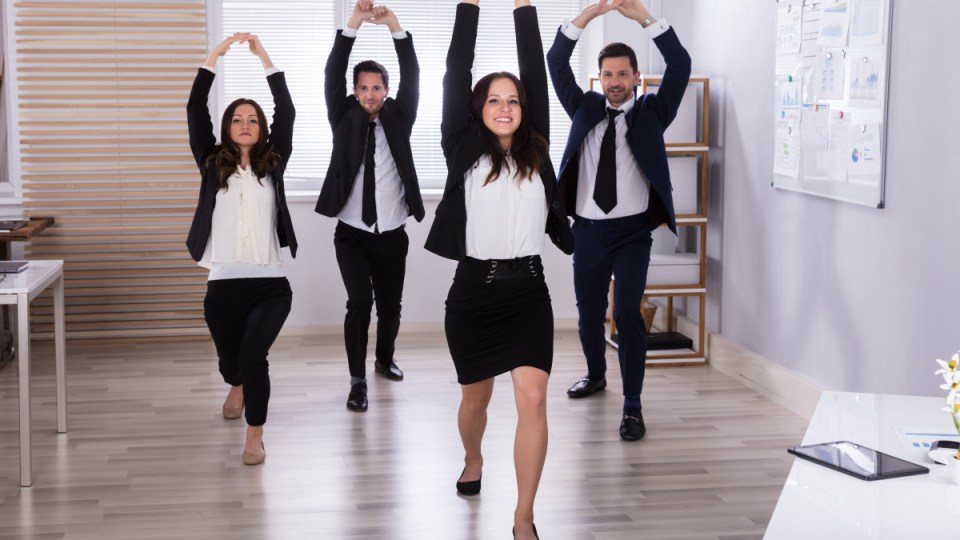 Team building can sometimes makes as much sense as an interpretive dance routine. Photo: Getty

Team building in the workplace, let’s go! If we can improve our office relationships and team rapport, we’ll boost productivity and conquer the world and be winners. Yeah!

Sound like a nightmare come true? You’re not alone.

A new study from the University of Sydney School of Project Management found “many employees resent compulsory bonding and often regard these exercises as the bane of their workplace existence”.

Doesn’t get much clearer than that.

Associate Professor Julien Pollack is interim director of the John Grill Institute of Project Leadership and one of the study’s co-authors.

In a prepared statement, he said: “Many people do not want to be forced into having fun or making friends, especially not on top of their busy jobs or in stressful, dysfunctional environments where team building is typically called for.

“These activities often feel implicitly mandatory. People can feel that management is being too nosy or trying to control their life too much.”

Is there a solution to painful team building?

Attempting to improve the social dynamic in a workplace isn’t a bad idea in itself. There are projects that implicitly demand genuine trust between colleagues.

But workplaces are full of cliques and hierarchies not dissimilar to the school playground.

And as it goes on sports day, classic team-building exercises actually tend to reinforce those cliques and intimidate the lower orders.

The goal of nurturing your more socially hesitant colleagues and creating a more inclusive, functional and creative space gets lost – because exercises that are meant to deepen workplace relationships tend to be self-sabotaging.

As the study found, team-building exercises “which focused on the sharing of, and intervening into personal attitudes and relationships between team members may be considered too heavy-handed and intrusive”.

But the Sydney researchers say that “some degree of openness and vulnerability is often necessary to make deep, effective connections with colleagues”.

But how can that be achieved?

The trick is to get real, scale down the exercise, and focus on building relationships between selected workers whose successful collaboration and communication are necessary for a project to succeed.

The process must be voluntary and private

Professor Pollack said: “We recommend an approach where people can opt out of team building discreetly, by conducting team building only among selected pairs of individuals who can choose whether or not to proceed with strengthening their relationship. Their choice would not be visible to management.

“An important point is to target the right relationships.”

But how do you build a relationship without the project turning awkward?

In a previous study, Professor Pollack and Dr Petr Matous trialled a “self-disclosure approach where participants were guided through a series of questions that allowed them to increasingly disclose personal information and values”.

The 36 questions that lead to love

The questions used in the study were first published in 1997 as part of research by psychologist Arthur Aron about “how feelings of interpersonal closeness are cultivated by disclosing personal details”.

They became an “internet sensation” in 2015, when The New York Times published a piece by Mandy Len Catron that claimed the questions could be used to make strangers “fall in love”.

The questions start with relatively safe topics, like, “Given the choice of anyone in the world, whom would you want as a dinner guest?”

Near the end of the session, they’re like this, “When did you last cry in front of another person? By yourself?”

The final question involves you sharing a personal problem with your discussion partner and asking their advice on how to handle it.

“This is not the sort of thing most people would normally choose to do at work, but our results show its worth,” the researchers say.

They measured significantly changed patterns of communication over three months.

Participating pairs felt more comfortable talking to each other, and talked more often – the most common change being from “not in the last month” to “once a week”.

The authors conclude: “In any such exercise you need to proceed at a pace at which you and your colleague are willing to reciprocate.”

But it may not suit everyone – and “management shouldn’t compel anyone to feel uncomfortable”.

The bottom line: “If you are willing to accept a little discomfort, our findings suggest that sharing a bit more in the workplace can be both personally rewarding and beneficial to the group.”

Hate those team-building exercises? Privacy is key to social bonding at work