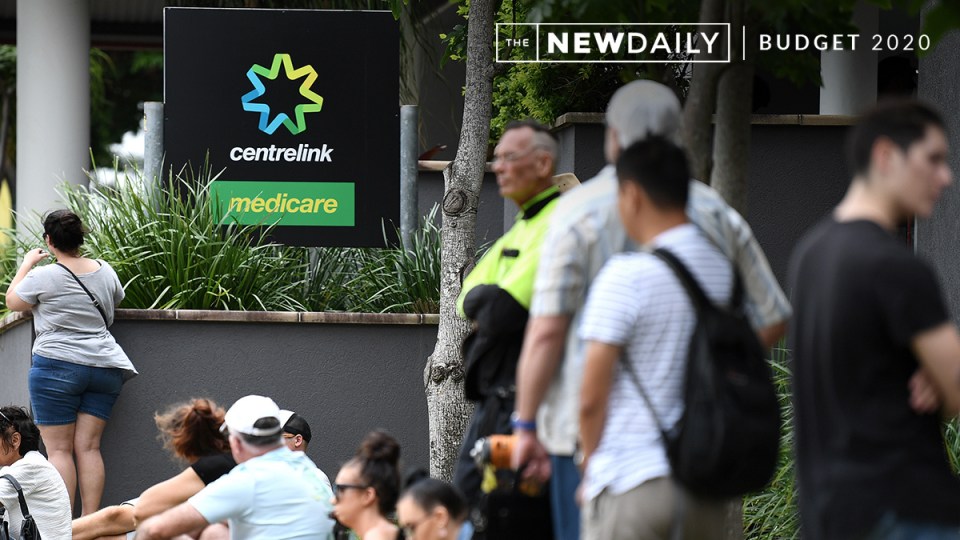 Jobs will be in the doldrums and the economic recovery will be a grind. Photo: TND/AAP

Workers are unlikely to get a decent pay rise for years after the pandemic left the economy “shuttered and shattered”.

New forecasts released by Deloitte Access Economics on Monday shows wages growing slower than inflation in 2021 and unemployment staying above 6 per cent until at least 2024.

The report also casts doubt on the government’s hopes of a private sector-led recovery – even without another major outbreak of the virus.

“It’s going to be bleak on wages and unemployment in the next little while with wages growth really slow and unemployment to rise amid net job losses,” report author Chris Richardson told The New Daily.

The research shows the unemployment rate will take a long time to fall back to pre-pandemic levels after hitting a peak of 8.4 per cent later this year. It says the jobless rate won’t fall back to 6.5 per cent until 2024.

Next financial year, the rate will still be as high as 8.3 per cent, with total employment growing only by 0.8 per cent despite some economic recovery.

“So wage and price inflation will stay in the slow lane until unemployment is comfortably below 6 per cent. That looks like being sometime during 2024,” the report read.

Deloitte is more pessimistic on unemployment than the government, which in the budget predicted the jobless rate would peak at 8 per cent later this year.

“But we predict a bigger uptick from the lows,” Mr Richardson said.

High unemployment will weigh on wages growth, with average weekly earnings forecast to rise by only 0.5 per cent in calendar 2021.

And it will take a while to pick up, rising just 1.7 per cent a year over the next years, before hitting 2 per cent annual growth in 2024 – well below the historical average of 3-4 per cent.

“While wage growth will be slow, that represents shared pain, while unemployment is a personal disaster,” Mr Richardson said. 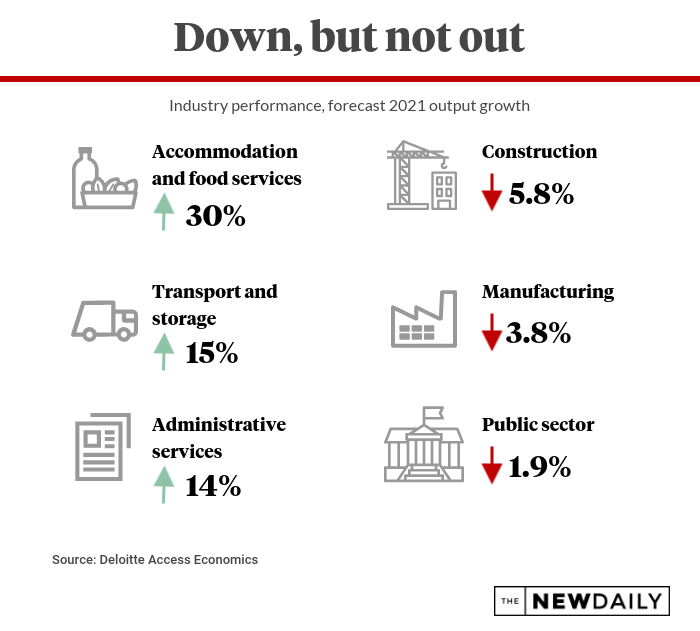 The report assumes no further major virus outbreaks and a successful vaccine coming in 2021.

And the figures inside the Business Outlook report cast doubt on the government’s budget strategy of using business investment to drive the economy.

Over 2021, business is only expected to boost its investment spending by 1 per cent while households will lift outgoings by 5.6 per cent and public sector spending will be up 4.7 per cent.

“The rise in household expenditure will be a bounce back from the effects of lockdowns.” 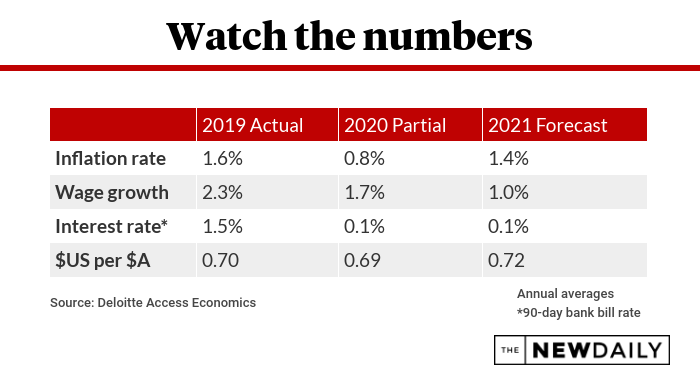 At the moment, government stimulus is holding the economy together.

“National expenditure is currently around $170 billion a month and stimulus measures have accounted for $26 billion of that for a couple of months this year,” Mr Richardson said.

And of the more than $70 billion expected to be spent on JobKeeper this year, 60 per cent is currently being spent in Victoria on a monthly basis, he said.

The denial of JobKeeper to casual staff employed for less than 12 months is clear in the research: While casual workers account for 20 per cent of the workforce, they account for 65 per cent of people forced onto the lower JobSeeker payment.

And what comes next for the economy is looking worrying, too.

As the federal government gradually reduces the rate of JobKeeper, it will replace the wage subsidy with smaller schemes for apprentices and young workers worth only $5.2 billion.

“That’s relatively small with JobKeeper currently 20 times the size of those other measures,” Mr Richardson said. 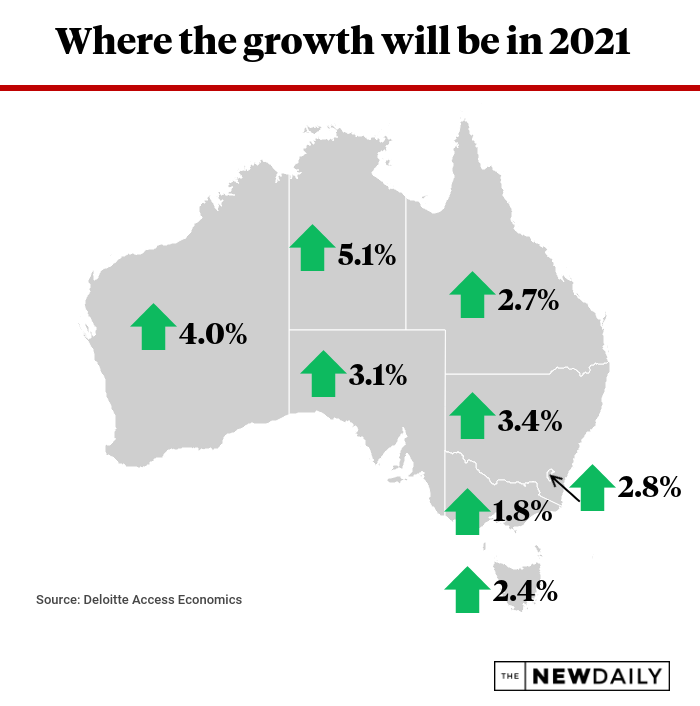 The economist said the government should be prepared to announce more spending if the economy fails to transition from one dependent on stimulus to one driven by business investment.

“There is a need for things to go right, but if they don’t then we will need more political help to repair the economy,” he said.

Meanwhile, GDP growth will rebound in 2021 to 3 per cent as Australians hit the shops once restrictions are eased.

This will be considerably better than the 1.9 per cent growth in 2019 – albeit from a smaller base.

Meanwhile, in a sign of people’s reluctance and inability to spend, annual inflation will undershoot the Reserve Bank’s target of 2 per cent over the next few years.

Prices have been hit hard by the virus with the inflation rate expected to be 0.8 per cent this year and 1.4 per cent next – before gradually climbing back to 2.3 per cent by 2024.

The government’s efforts to support jobs “so far has been going really well,” Mr Richardson said.

“But it all depends on the creation of new jobs after support measures ease.”

But if the government does have to step up to the breach with more stimulus spending, then it will find it very affordable.

Deloitte expects the 10-year-bond rate at which government borrows money to remain at 0.9 per cent until 2024.

That means after inflation is taken into account the real cost of borrowing will be close to minus 1 per cent – meaning the government should make a return on its investment even if it produces little returns.

Bleak outlook for jobs and wages in ‘shattered economy’: Deloitte