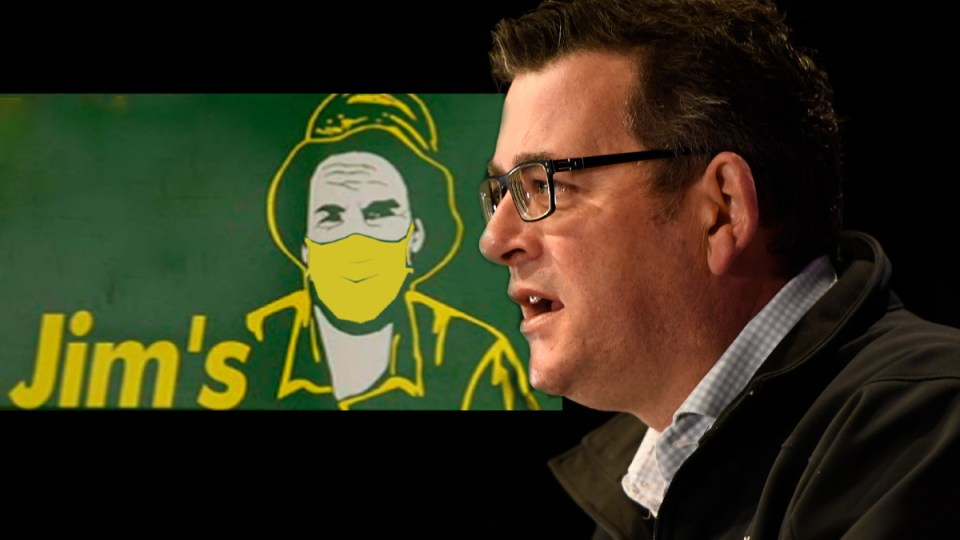 Victorian Premier Daniel Andrews has ruled out relaxing workplace restrictions for sole traders after an open letter from Jim’s Mowing boss Jim Penman called for his resignation if he failed to budge on the issue.

Mr Penman wrote on Friday that the government should allow sole traders working alone on a site to continue working as “such activities present no risk to anyone”.

He said the Premier had “thrust another knife into the economy of our wonderful state” by confining these workers to their homes and challenged him to “name one such worker who has passed on or contracted an infection”.

But Mr Andrews refused to change the rules – telling reporters on Sunday that if he bowed to every one of these demands “we would have more people at work in August than we had last month”.

“And that will mean this simply goes on for a very, very long time,” he said.

As the state recorded another 394 cases and 17 deaths on Sunday, Mr Andrews said he appreciated Stage 4 restrictions were “very painful” for households and businesses, but warned any economic gain from relaxing rules for sole traders “won’t mean much if this becomes a six-month lockdown instead of six weeks”.

“I’m not for a moment criticising someone for feeling pain and grief. This is not the situation that any city or state anywhere in the world wants to confront,” Mr Andrews said.

“But second waves are a reality of this virus. These settings, this strategy, will get us to the other side.”

Mr Andrews was then asked why having a gardener or pool cleaner in the backyard was dangerous.

“And again, the person is not going to be in one place for the whole time. They will move around the community. We’ve seen mystery cases.”

A Victorian government spokesperson confirmed to The New Daily that only sole traders listed by the government as a permitted worker can continue to work – regardless of whether the individual works alone.

The clarification comes after a government document circulated earlier in the week said: “Sole operators can continue to operate, if they do not have contact with the public, or with people other than those persons living in their primary household.”

Mr Penman highlighted this contradiction in his letter to the Premier.

“I have no doubt you made a genuine mistake in not knowing your government’s regulations, but instead of having the guts and integrity to admit it, you chose to throw tens of thousands of decent, hard-working people out of work,” he wrote.

“This action of yours does not reduce the risk of infection, Mr Premier – it increases it. Compared to mowing someone’s lawn, there is far more risk walking the streets for exercise or entering a bottle shop.

“But there are other consequences. Apart from financial ruin and increasing cost to the taxpayer, lockdown brings misery.

“You well know that it increases child abuse, domestic violence, divorce, depression and suicide. And all this for a (sic) no benefit at all, in our fight against infection.”

The state government has also drawn criticism for excluding sole traders from its Business Support Funds, which pay grants of $5000 to affected businesses.

But sole traders are eligible for either JobSeeker ($1100 a fortnight) or JobKeeper ($1500), which are paid by the federal government.

When announcing the imposition of new restrictions on Monday, Mr Andrews said the changes would potentially cause another 250,000 workers to be stood down from their jobs – adding to the 250,000 stood down at an earlier stage and the 500,000 already working from home.

Separate analysis from Treasury estimates the lockdown will reduce GDP in the June quarter by $12 billion and cause businesses to shed an extra 400,000 jobs by the end of the year.

Sunday was the state’s deadliest day yet, with 17 further deaths overnight.

Mr Andrews said that most likely reflected the impact of Stage 3 restrictions – though he warned against reading too much into the daily numbers.

“That’s still got an R-rate (reproduction rate) of about one or just under, which means that every person who has it is giving it to at least one other,” Mr Andrews said.

“We have to drive that so that [only] every third or fourth person who has it is infecting someone else.”