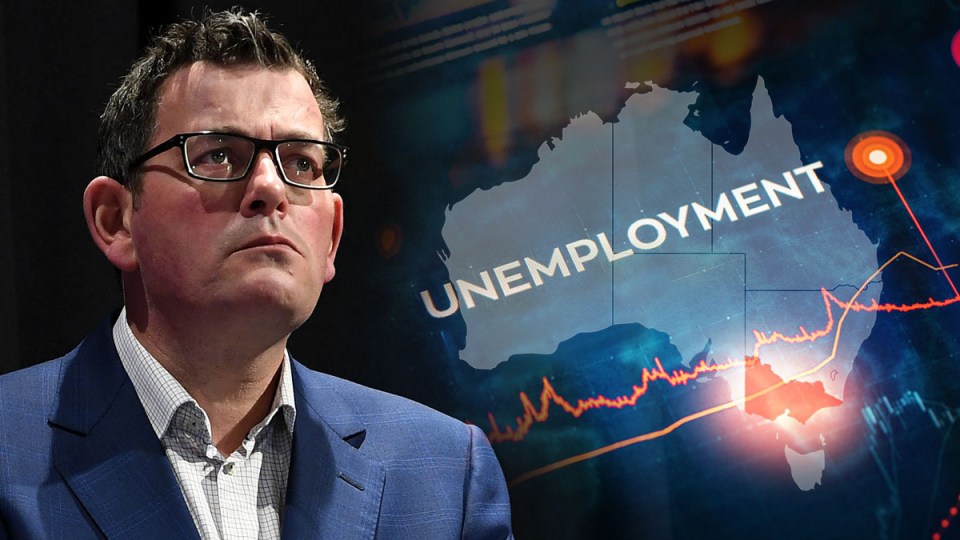 Another 250,000 workers could be stood down as a result of Stage 4 restrictions. Photo: TND

Victorian Premier Daniel Andrews has warned another 250,000 workers could be stood down from their jobs as a result of further restrictions announced on Monday.

The Stage 4 measures will shut almost all shops in metropolitan Melbourne and reduce construction sites above three storeys to 25 per cent of their normal workforce for at least six weeks.

Mr Andrews said the decision to introduce tougher restrictions was “heartbreaking” and would likely add another 250,000 people to the quarter of a million already stood down “in one form or another”.

SGS Economics and Planning principal Terry Rawnsley told The New Daily that could reduce GDP by $15 billion to $19 billion in the next six weeks.

That’s based on his estimation that the restrictions will affect between 35 per cent and 45 per cent of the Victorian economy.

Forcing some builders to work with 75 per cent fewer staff will deliver a particularly large blow, he said, as construction accounts for roughly 8 per cent of the state economy.

And although the devastating setback will mean more work for rival manufacturers and abattoirs in New South Wales, it will also hurt consumer confidence and discourage national firms with Victorian offices from investing in other parts of their business.

That’s more than 5 per cent of Victorian GDP.

“But the real question is: What happens in six weeks’ time? That’s the great unknown,” Mr Rawnsley said.

“Does the virus infection rate drop back to double-digit level, [and do] we return to normal, or is there more pain ahead?”

As Mr Andrews prepared to announce another 429 cases and 13 coronavirus deaths on Monday, Treasurer Josh Frydenberg likened Victoria’s second wave to a “war-like situation” and foreshadowed changes to the JobKeeper eligibility criteria.

Sky News later reported that the criteria will be amended so that businesses are only required to demonstrate a 30 per cent drop in turnover over one quarter, rather than the two as currently required.

Angela Jackson, an economist at Equity Economics, said such changes were essential.

“Ultimately, there will be businesses that have to close after today as a result of the health restrictions – and I think there is a role for government to step in and provide support for those jobs during that period,” Ms Jackson said.

Ms Jackson said the introduction of Stage 4 restrictions meant the government would have to throw out the forecasts it handed down on July 23, as they were based on the assumption that the Victorian lockdown would last no more than six weeks.

That means unemployment will stay higher for longer and government debt will grow even more.

“There’s no doubt that it will have an impact more broadly on the economy – it means the forecasts from two weeks ago are meaningless,” she said.

“Investment by business … in this environment is unlikely. So, [the restrictions] will certainly slow the recovery.”

In response to the Stage 4 restrictions, Premier Andrews announced a second round of $5000 grants for Melbourne businesses affected by the second lockdown – on top of $10,000 of grants from the first lockdown – and expanded the policy to include regional businesses.

“We are keen to see Victoria extend the measures currently supporting business into 2021 due to the profound impact of this ongoing pandemic lockdown period,” he said.

“This includes an extension of the leasing code of conduct put in place for small businesses earlier this year, which is due to expire in September.

“Retailers need certainty to make business decisions around their future.”

Peak employer association Ai Group was more critical, arguing the restrictions would affect sectors that have been responsible for relatively little transmission, such as construction and manufacturing.

Tim Piper, the head of Ai Group in Victoria, said “the total Victorian supply chain has not been fully considered in the structure of these restrictions”.

“Companies such as metal fabricators which support the food sector, health and related activities have been told to close. While there are some narrow exceptions there has been no recognition of how interconnected these businesses are,” he said.

Mr Andrews also foreshadowed more support for people suffering from domestic violence or poor mental health as a result of the lockdown.

Roughly an hour later, Prime Minister Scott Morrison announced a “pandemic leave disaster payment” of $1500 for workers without access to sick leave who are told to self-isolate for 14 days due to COVID-19.

“That payment will be made in the same way that disaster recovery payments are made. People would only need to ring the number 180-22-66, I’m advised from Wednesday,” Mr Morrison said.

“That means that those who need to self-isolate as a result of an instruction by a public health officer, there is no economic reason for you to go to work.”