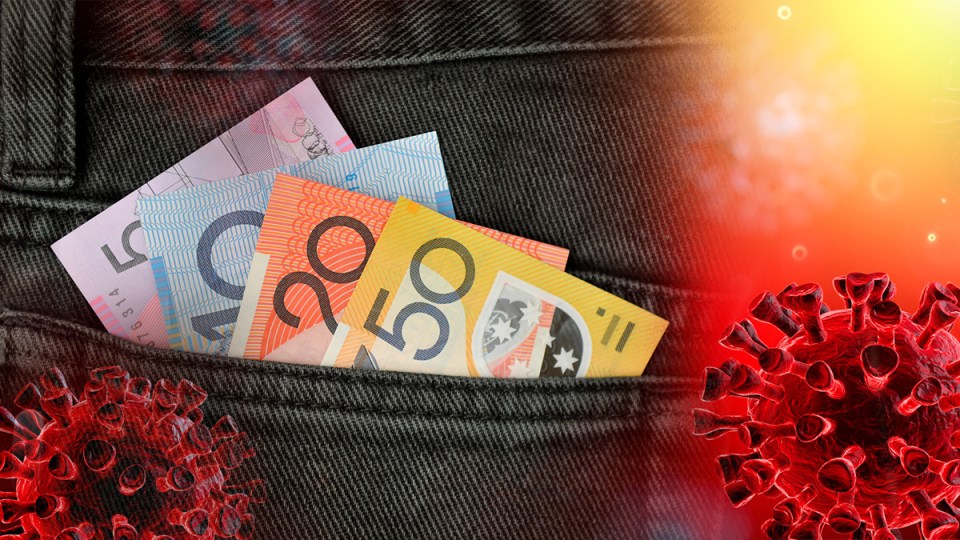 The average superannuation member neither lost nor made money over the financial year. Photo: TND

Superannuation funds have weathered the pandemic storm with balanced funds finishing the financial year roughly where they started.

Some big industry funds even managed a slightly positive return for their balanced or growth options, in which most Australians have their retirement savings invested.

The nation’s largest fund, $180 billion AustralianSuper, turned in a 0.52 per cent return for the financial year while $54 billion building industry fund Cbus managed to make members 0.75 per cent.

And that’s despite the local sharemarket suffering its worst annual result since the global financial crisis – falling 11 per cent over the year.

“We have been through an extraordinary health and economic crisis that severely affected domestic and global markets,” said AustralianSuper chief investment officer Mark Delaney.

“To arrive at the end of the financial year with a positive result given the turmoil we have seen is a very good outcome for members.”

SuperRatings measured returns across all balanced funds and found the median return was down slightly, at minus 1.2 per cent for the financial year, while growth funds fell 1.6 per cent and capital stable allocations increased 0.4 per cent. 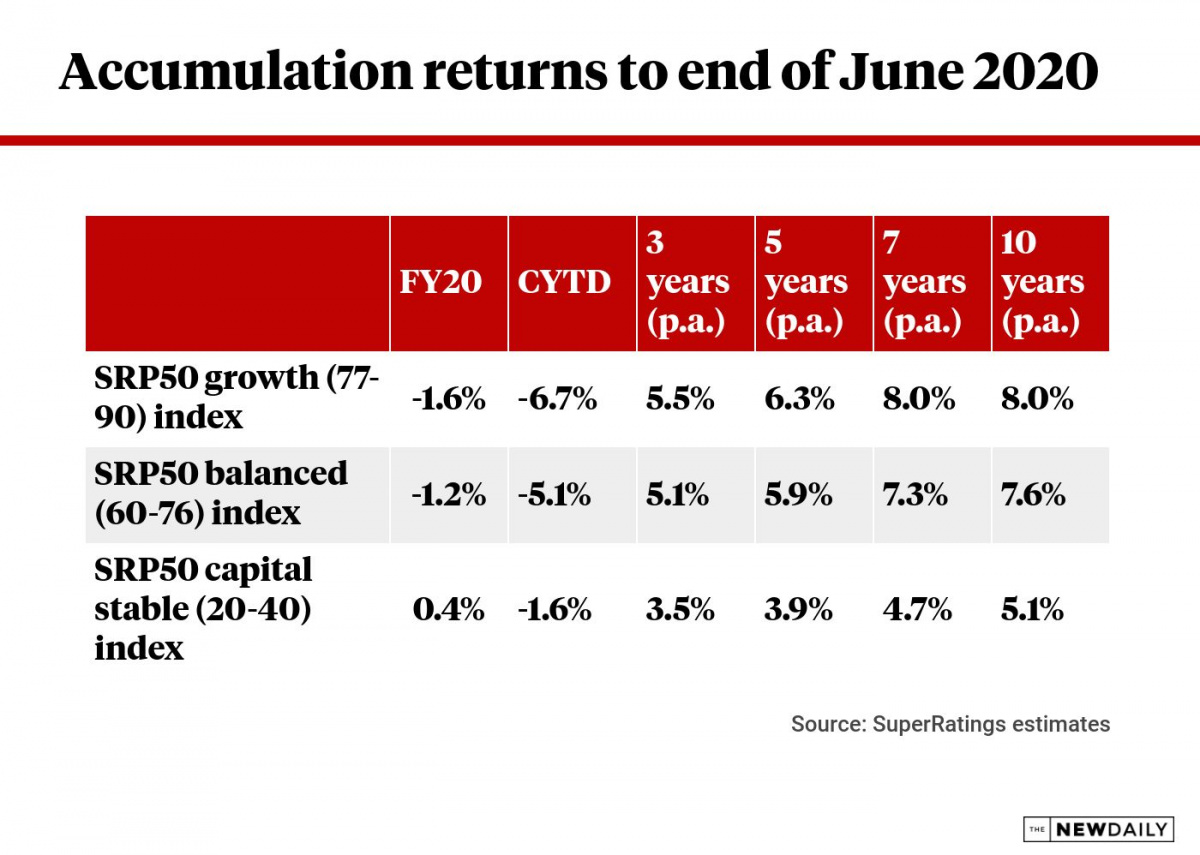 “Super funds made a strong comeback in the June quarter, but the market remains challenging due to the degree of uncertainty surrounding the COVID-19 pandemic,” said Mr Rappell.

“While markets have shown signs of stabilising, which is good news for members, we don’t want to get ahead of ourselves.” 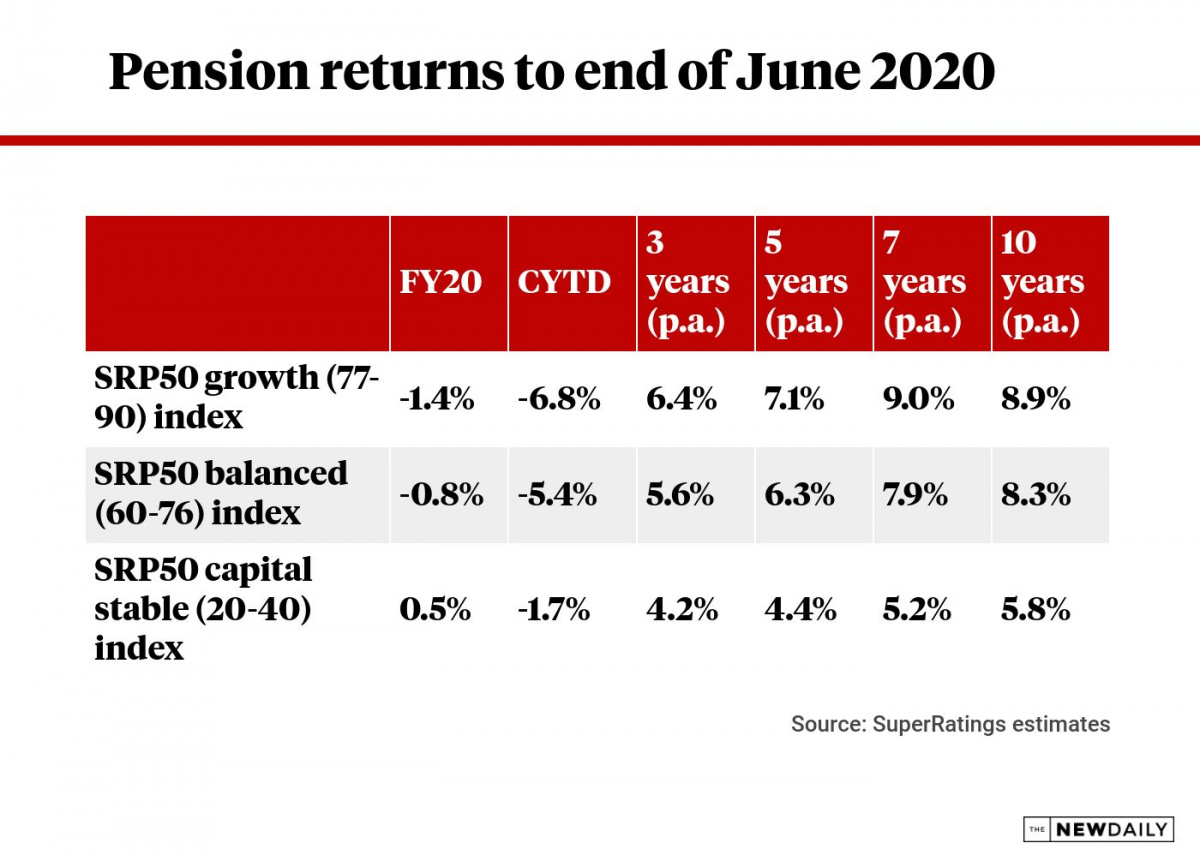 Balanced funds in pension mode, shown above, slightly outperformed funds in accumulation mode because they have marginally more conservative investments.

The recent sharemarket strength stands in stark contrast to the state of the economy with unemployment spiking.

“Financial markets make no sense in terms of the real economy but that’s how they function,” Mr Donnin said.

“While there has been a slight fall in super returns in some funds, the result stands in stark contrast to the experience during the global financial crisis [in 2008] when balanced funds were down 20 per cent in the worst 12 month period,” Mr Dunnin said.

The reason super funds have withstood the downturn so well is their investments are more diversified today than they were during the GFC.

Typically, local shares make up 25 per cent of a balanced portfolio and international shares account for 28.4 per cent.

Bonds account for about 14 per cent with unlisted property accounting for 7.2 per cent.

Meanwhile, listed property generally accounts for 0.7 per cent of industry funds’ portfolios and a much higher proportion of for-profit retail funds’. 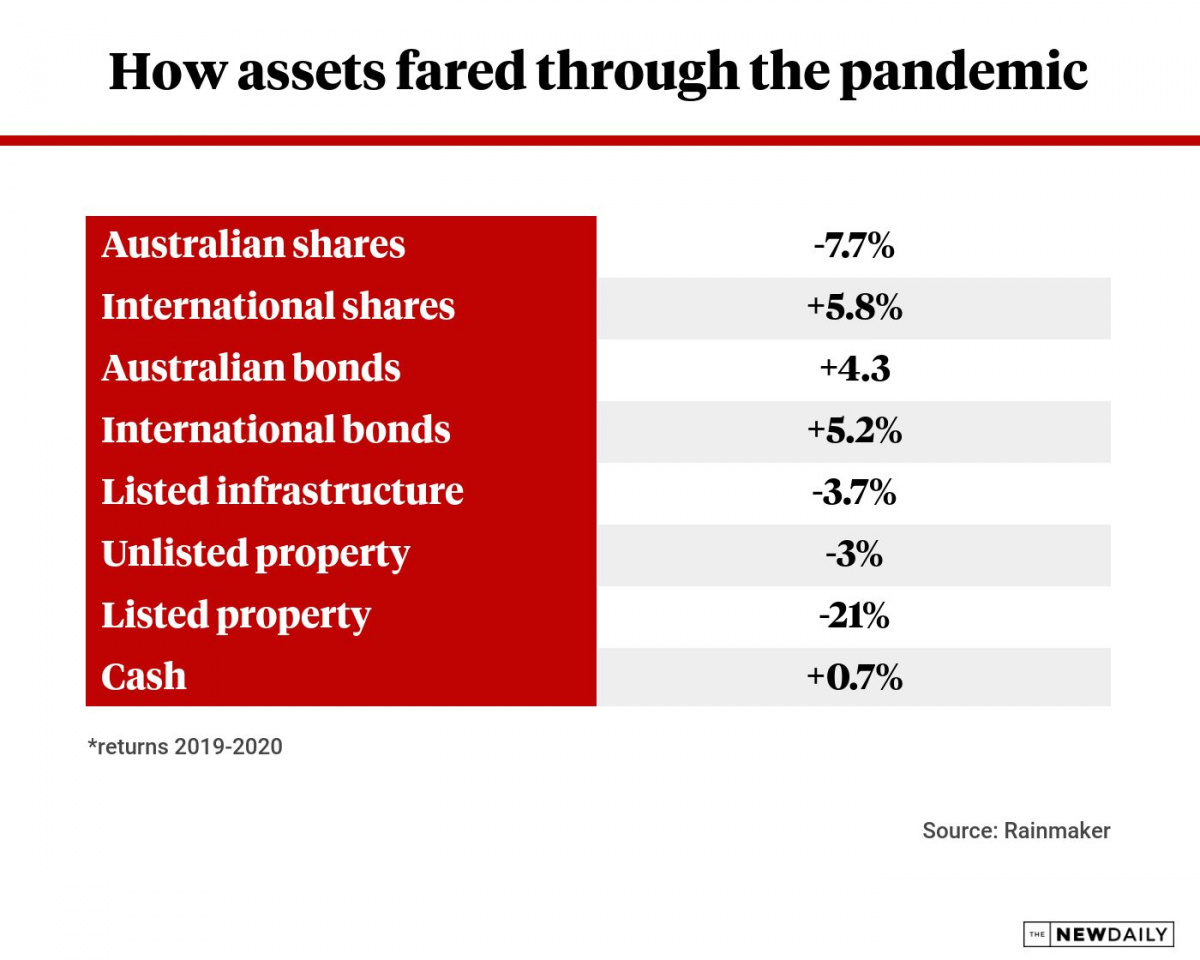 The market fall during the early days of the pandemic was much more severe than during the GFC but the partial recovery has also been much sharper.

Cbus chief investment officer Kristian Fok said funds had put in a lot of effort to protect members from the market volatility.

“By mid-March, sharemarkets had fallen in a month the equivalent of around 15 months’ losses during the Global Financial Crisis,” Mr Fok said.

“[Overall], conditions have been unprecedented. We’ve seen ongoing trade-wars, catastrophic bushfires plus a world-wide economic shutdown in response to COVID-19.

“Superannuation is a long-term investment and periods of negative returns are expected to occur from time to time. We put a lot of effort into making sure members have diversified investment options as a buffer to volatility like this.”

“There have certainly been some positive developments recently, although we remain in challenging times as markets seek a way forward, with the low-interest rate environment creating an extremely challenging outlook for those members near the retirement phase searching for meaningful and sustainable income,” he said.