The property horse has bolted, with national house prices rising for the first time since the pandemic-induced spiral began in April.

Analysts say the turnaround is due to record-low interest rates and government stimulus, with the Reserve Bank expected to take rates even lower on Tuesday afternoon.

But they said the house of cards might come tumbling down when home loan deferrals and government support payments end next year.

After falling for five months, national house prices rose by 0.4 per cent in October, according to property analytics firm CoreLogic.

Melbourne was the only capital city where prices fell over the month (down 0.2 per cent), while Adelaide and Darwin reported price growth of 1.2 per cent.

Along with Hobart and Canberra, the two cities saw prices hit new record highs in October.

And price growth in the regions once again outstripped the cities.

CoreLogic head of research Eliza Owen told The New Daily house prices had recovered so quickly during the crisis as governments had announced massive stimulus and successfully contained the virus, while job losses had affected industries that predominantly employed renters.

Ms Owen noted that consumer sentiment jumped 11.9 per cent in October alone, which was the largest post-budget bounce since 1994 and led to higher bids at auction. 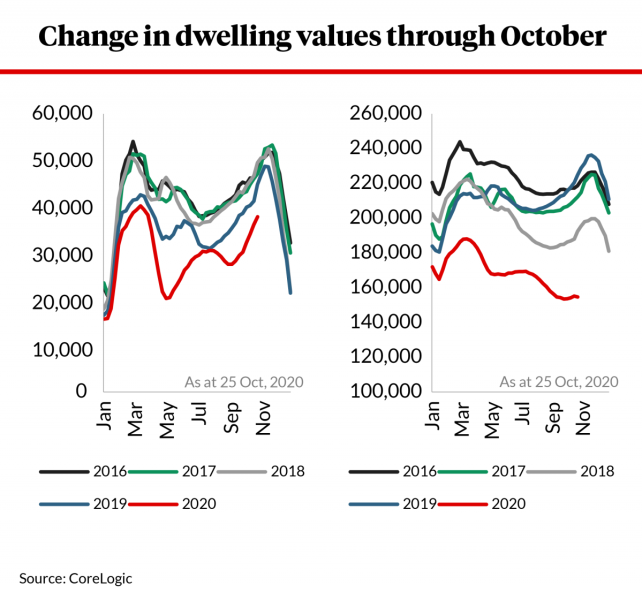 And with demand continuing to keep pace with the number of homes coming on to the market, Ms Owen said home owners in mortgage arrears may be sensing an opportunity to get out while they can.

“South of Sydney is a good example where we saw 129 auctions held in that area over the past week, and that’s much higher than the volumes we usually see,” Ms Owen said.

“Potentially, the increase in listings in inner-city areas are a result of borrowers having reconciled with their debts and see the need to sell.”

Risk of a property bubble grows

But AMP Capital chief economist Shane Oliver said October’s figures should be “interpreted cautiously”, because prices have been inflated due to what he calls a “false market”.

Record-low interest rates and government incentives such as HomeBuilder and the First Home Loan Deposit Scheme have brought forward demand and consequently pushed up prices, he said.

But the market could hit a rough patch next year when stimulus is wound back and limited migration rips spending from the economy.

“Stimulus is bringing demand forward from next year, and then if we get to next year, we may find there’s a bit of an air pocket because demand has been brought forward and we’ve still got low levels of immigration – which is what the government’s projecting,” Dr Oliver said.

“Employment conditions may also be less favourable at the same time the underlying supply-demand situation reverses, and then young people find they got in prematurely with higher levels of debt and the price on their property goes down.” 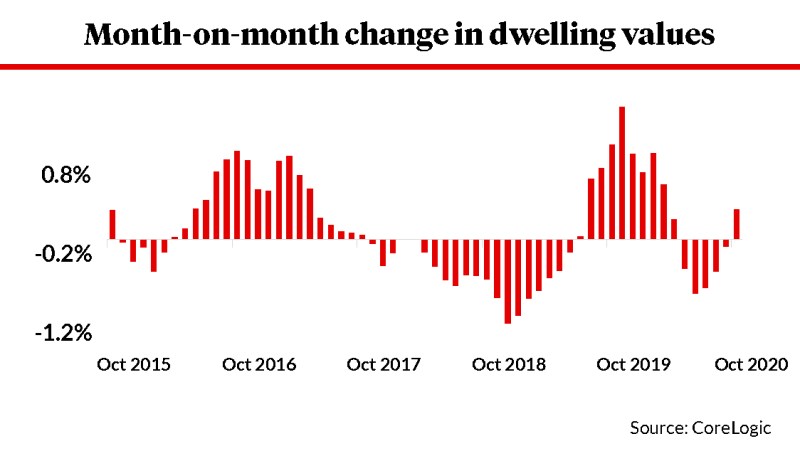 Separate figures released by the Australian Bureau of Statistics on Monday showed first-home buyers remained the most active buyer group, with a “fear of missing out” driving a 45.5 per cent jump in new buyers compared to September last year.

But Mr Mickenbecker said those buyers – particularly those who used the First Home Loan Deposit Scheme – have inherited a “sleeper” problem that could be exposed at the first sign of a downturn.

“If you borrowed a home with 5 per cent [deposit] and prices fall, you lose all the equity in your property – as simple as that, it’s gone,” Mr Mickenbecker said.

“They would be servicing a very high repayment without inflation raising their income to make that debt look smaller – and when interest rates start going up again, you may have a whole lot of borrowers who are overborrowed and can’t afford their repayments.”