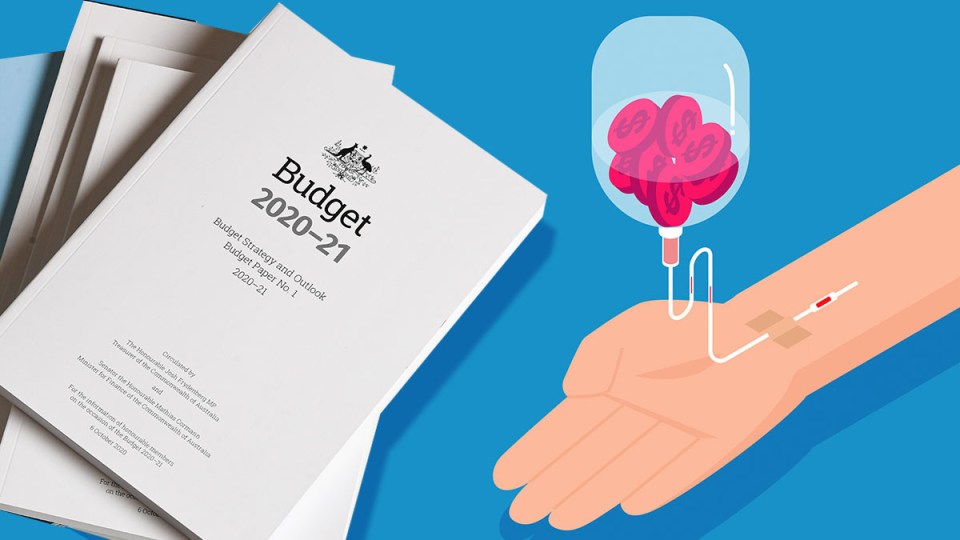 Early signs suggest the budget has provided a shot in the arm for consumer confidence. Photo: TND/Getty

Consumers are feeling more confident about the economy than at any time since July 2018 in what economists have described as a ringing endorsement of last week’s federal budget.

The Westpac-Melbourne Institute Index of Consumer Sentiment surged by 11.9 per cent in October to 105 points, which was 10 per cent higher than the average score over the six months before the pandemic.

Westpac has asked households every year since 2010 whether the federal budget would “improve their finances”.

Over that period, the net balance of respondents who said the budget would improve their lot was minus 29 per cent, which meant a clear majority expected “measures to adversely affect their finances”.

But this budget was different: Westpac chief economist Bill Evans said it was the first time a majority of Australians thought it would make them richer.

“For this Budget we saw a net positive balance of 9.5 per cent indicating that a clear majority of respondents assessed that the Budget would ’improve their finances’,” Mr Evans said.

“Within the overall result there is a positive balance of 21.9 per cent from males compared to a slight negative of -3.7 per cent for females.” 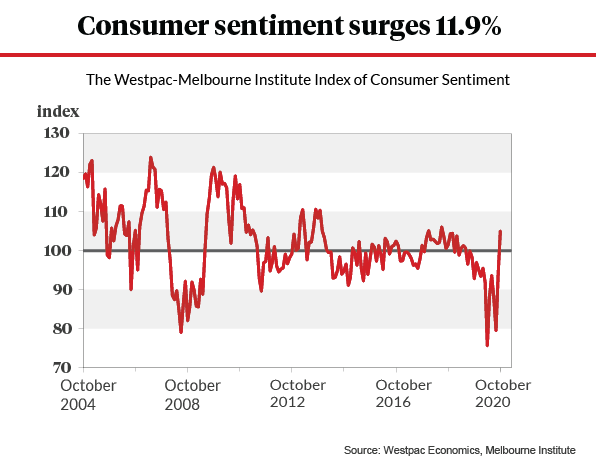 The different reaction from men and women comes after the Coalition was criticised for failing to invest in female-dominated industries hit hardest by the recession.

And people earning above $100,000 a year were also more upbeat about the budget than the average Australian – with 25.7 per cent more people in this bracket saying the budget would improve their finances than hinder them.

As for consumer confidence more broadly, the Westpac survey found it had lifted in all states as a result of the federal budget, lower virus case numbers, and the expectation of an RBA rate cut next month – with all components of the index improving in October.

Commonwealth Bank associate economist Nicolas Guesnon said an improvement in sentiment was to be expected after the federal budget.

But he said the “strength of the lift was a pleasant surprise” and marked the largest post-Budget bounce since 1994.

He attributed the positive result to the gradual easing of coronavirus restrictions, the income tax cuts, and the extension beyond September of JobKeeper and the higher JobSeeker payment.

“Notably, the success NSW has been having in remaining ‘open’ despite some daily evidence of new cases has really buoyed its citizens,” Westpac’s Mr Evans added.

“Another welcome surprise was a solid lift of 13.7 per cent in Victoria to a level now comparable with most states except NSW.

“Clearly the citizens of Victoria are eagerly anticipating an imminent reopening in Melbourne. Any significant delay is likely to see confidence in Victoria held back.” 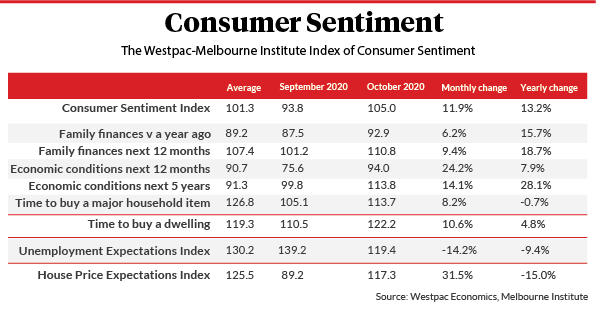 Among other things, Dr Chalmers used the speech to criticise the federal budget for lacking ambition and ignoring the need for cheaper child care and more action on climate change.

“Unusually, this budget was defined more by what’s not in it than what is,” he told the press club.

“Nothing for childcare, or cleaner and cheaper energy. Nothing for social housing, no plan to tackle insecure work or to address the crisis in aged care.

“Nothing to advance equality for women, leaving a gap that shreds the credibility of this government.”

Noting that the budget estimates unemployment will remain above pre-COVID levels for at least another four years, Dr Chalmers said the federal government should have announced more job-creation measures.

He said another 160,000 Australians were expected to lose their jobs by the end of the year and the government would cut support before many of them regained employment.

“When unemployment gets back below six per cent – around its peak during the GFC – government policy officially snaps back to austerity,” Dr Chalmers said.

“They want to slam on the brakes before the recovery even gets into second gear.”

The shadow treasurer conceded that some of the government’s measures made sense in a crisis – notably the instant asset write-off for business and wage subsidies for younger workers.

But he said the policies rely “on business doing the heavy lifting in the face of persistent structural barriers to investment”.

Citing work by the OECD, the International Monetary Fund and the Grattan Institute, Dr Chalmers said the personal income tax cuts – parts of which Labor leader Anthony Albanese has hinted at repealing – would only deliver 50 cents in GDP for every dollar invested.

But every dollar of direct government investment would return at least $1 in GDP, he said.

“Direct government spending often has a bigger fiscal multiplier, and its impact can be several times larger when interest rates are close to zero,” the shadow treasurer told the press club.

“This only bolsters the case to make government investments in things like social housing, as Labor is proposing.”

Asked for his take on Westpac’s survey, Dr Chalmers said “it remains to be seen whether that confidence will be enduring, but I don’t think we should declare victory or otherwise based on one survey.”

But Prime Minister Scott Morrison seized on the positive results.

“It needed a budget which was going to give Australians confidence. It has been the shot in the arm Australians needed.”