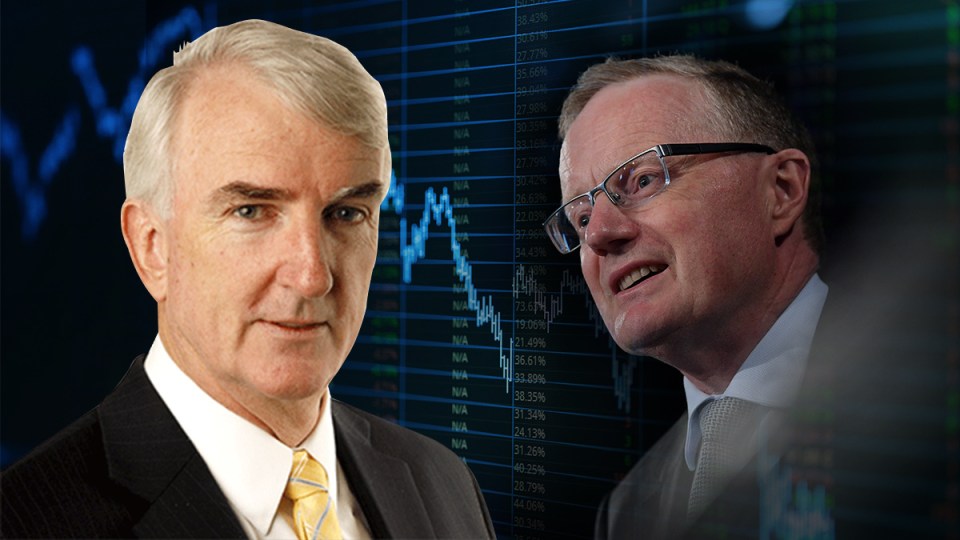 The Reserve Bank is about to underline how soft the Australian economy was before COVID struck.

No, Mr Frydenberg, no matter how many times you say it, our economy was not “strong” when you were falsely claiming to be “back in black”.

The dogs are barking that the RBA will slice its cash rate again on Melbourne Cup day, down 15 points to just 0.1 per cent – effectively zero in the way the cash rate works.

Thus over eight months of the biggest economic shock since the Great Depression, our central bank will have cut 65 points.

Forgotten by just about everyone is that last year it took the RBA board just four months to cut the cash rate by 75 points, halving it in three slashes of 25 points.

That weakness meant the RBA had little conventional ammunition left in its cupboard when the pandemic hit.

Oh, Mr Frydenberg and Mr Morrison kept telling us before and after the 2019 election that the economy was “strong” as they tightened fiscal policy in pursuit of their political Holy Grail, the elusive surplus. Saying it  didn’t make it so.

They persistently ignored RBA pleas for more fiscal firepower, forcing the bank to keep upping the monetary medicine, betting the economy on the idea that, if they made money cheap enough, they could reignite housing prices and we’d be “saved” by another housing boom.

The Prime Minister and Treasurer also happily verballed the RBA governor from time to time, claiming Dr Lowe said the economy was strong when the governor was in fact careful to say our “economic fundamentals” were strong – a different thing.

Yet again, that “trust” thing was at play. If we couldn’t trust the Treasurer to be straight with us last year when the economy was merely weak, why would we trust him now when we are in recessionary crisis?

The budget’s emphasis on relying on a magical business investment recovery rather than direct job creation, its concentration on parts of the economy that weren’t most affected by the crisis and its promotion of fossil fuel instead of renewables all feed into the suspicion that the government wants to use the crisis as an excuse to further its standard Conservative ambitions in industrial relations, governance and tax.

As JobKeeper is unwound, the JobSeeker supplement is reduced, most people lose their 2020-21 tax cut, real take-home wages go backwards and the loss of population growth is more clearly felt, the federal government will be back in fiscal-tightening mode, continuing to leave most of the work to the Reserve Bank.

But the RBA is already “pushing on a piece of string” with interest rates.

Do you know a single business or home buyer who is waiting for interest rates to be shaved by 0.15 of a per cent before opening their wallet? No, neither do I.

Of course the RBA is doing more than taking an emery board to the cash rate. It will do the same for unlimited government bonds and $116 billion yet to roll out in the term funding facility it offers banks, credit unions and building societies.

It might buy bonds further out along the yield curve and it is letting everyone understand that rates will stay low for as far as the eye can see.

That’s all supportive of the financial system and the economy, but it provides a very slow road out of recession without the right sort of fiscal help.

The minutes of last month’s RBA board meeting made the case for the central bank to take the expected next steps on Tuesday. The minutes even noted market prices indicated investors expected the cash rate to fall below the 0.1 per cent tipped for tomorrow.

A cash, TFF and government bond rate of 0.1 per cent means real interest rates are falling further into the negative – effectively free money for our governments and banks. What would the 2013 shadow Treasurer say about that?

(Actually, Joe Hockey probably doesn’t care much just now – he’s likely to be more concerned about the value of his Washington lobbyist business being reduced if Joe Biden wins this week.)

Given the strength of the case made in the minutes for further action, it looked like the RBA held off trimming last month to give Mr Frydenberg’s budget a chance to make a difference.

If the bank goes further on Tuesday, it will be confirmation that for all the debt and deficit rolled out by the Treasurer, it’s not hitting the spot. Conservative “trickle down” ideology triumphing over pragmatism.

The RBA knows full well that all its efforts are still pushing on the infamous piece of string.

The minutes suggested (hoped) that further stimulus would have more traction when our economy is opening up. All the rate cuts in the world couldn’t do much when we were in the process of closing down.

“Weakness in business credit growth appeared to be driven mostly by  weak demand in response to weak economic conditions and the uncertain environment,” the minutes state.

And even with further monetary stimulus, the board thought that for some businesses, “their best survival strategy would be to hibernate until economic conditions had sufficiently normalised”.

That doesn’t sound like much of a private enterprise-led recovery to me.

Yes, there is a pick up as more of the country comes out of lockdown. There is an element of pent-up demand, but there’s still plenty of that uncertainty and weak economic conditions.

The extent of business caution – beyond the zombies that aren’t coming back or are awaiting the last rites – is shown by the way they have battened down and cashed up.

According to a speech by RBA assistant governor Michele Bullock last week, before the pandemic about half of businesses only had enough cash to handle one month’s worth of expenses.

Last month, 60 per cent of businesses had enough cash to handle three or more months of expenses. 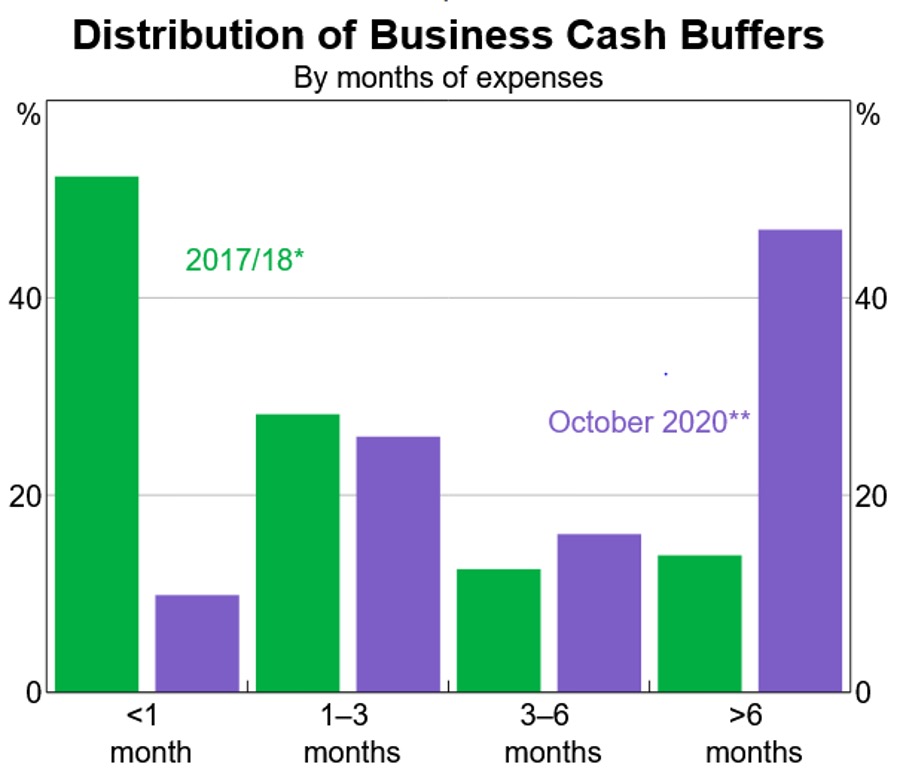 Ms Bullock said that would help with recovery. True, but a less glass-half-full person would also think a key reason for the buffer is that assistance has been pocketed and expenses have been slashed – fewer staff, less rent, frozen mortgages.

The strings around the buffer won’t be loosened until businesses are feeling secure about the outlook and demand for their services and goods recover.

Contrary to Mr Frydenberg’s ideology, most businesses will follow out of this recession, they won’t lead the way.

Discussion of Tuesday’s board meeting may have been muddied by some silly headlines about the RBA saying “the recession was over”. It didn’t.

Those headlines were in reference to the RBA deputy governor suggesting GDP may have grown in the September quarter.

By the most simplistic and misleading measurement – and handy shorthand – a recession is two or more quarters of GDP falling.

In the real world, there are other indicators of recessionary conditions. If unemployment was high and still rising – even though it’s a lagging indicator – it would be hard to argue we were out of recession. Ditto if the 12-month growth rate in GDP was still negative.

Both indicators are likely to be unfavourable for a while. Even when unemployment eventually starts to fall, the costs of the recession linger in the people still unemployed.

If there is some growth in the September quarter, it could be appropriate to say a recovery might have started but that wouldn’t mean we were out of the recession.

Left to rely on the pressure that can be exerted on the RBA’s frayed string, that is quite some time away.

But no doubt Josh Frydenberg will soon be telling us we’re powering out of recession and that the economy is strong.

Michael Pascoe: Reserve Bank forced to push even harder on its piece of string