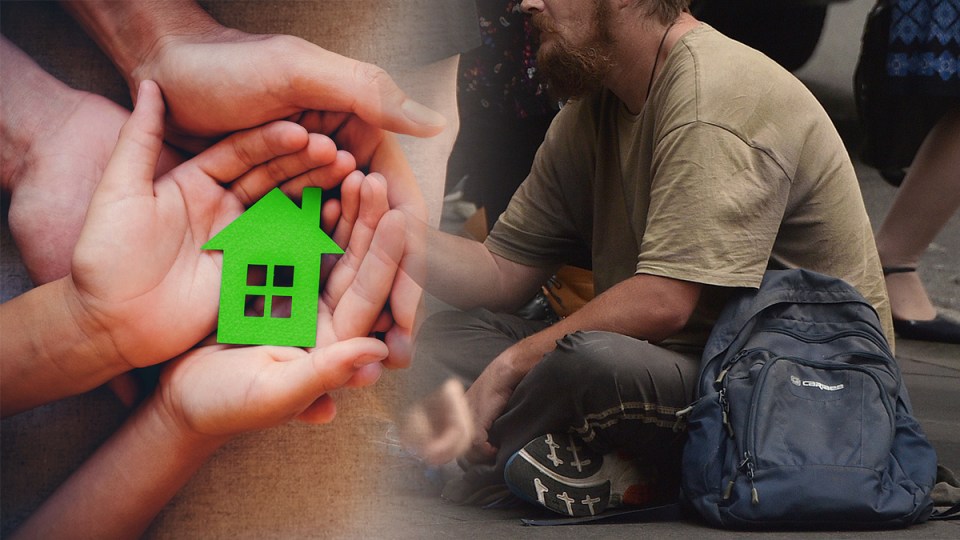 Australia’s private rental market is failing to provide affordable homes to the bottom 40 per cent of income earners, forcing many to live out of cars, couch-surf with friends, or cram into overcrowded rooms.

For the bottom 20 per cent of income earners, demand for affordable rental properties exceeds supply to the tune of 212,000 homes, according to a new report by the Australian Housing and Urban Research Institute (AHURI).

The large shortage, which rises to 305,000 homes when unavailable properties are excluded, means that four out of five very low-income households in Australia are paying unaffordable rents – defined as more than 30 per cent of a household’s gross income.

Lead researcher Kath Hulse, from Swinburne University, said the shortage had increased since 2011 and would continue to rise over the coming years.

“What’s really clear is that while the private market has produced a lot more supply, it hasn’t, and it isn’t, and it almost certainly won’t, produce supply at the lower end [of the income scale],” Professor Hulse told The New Daily. 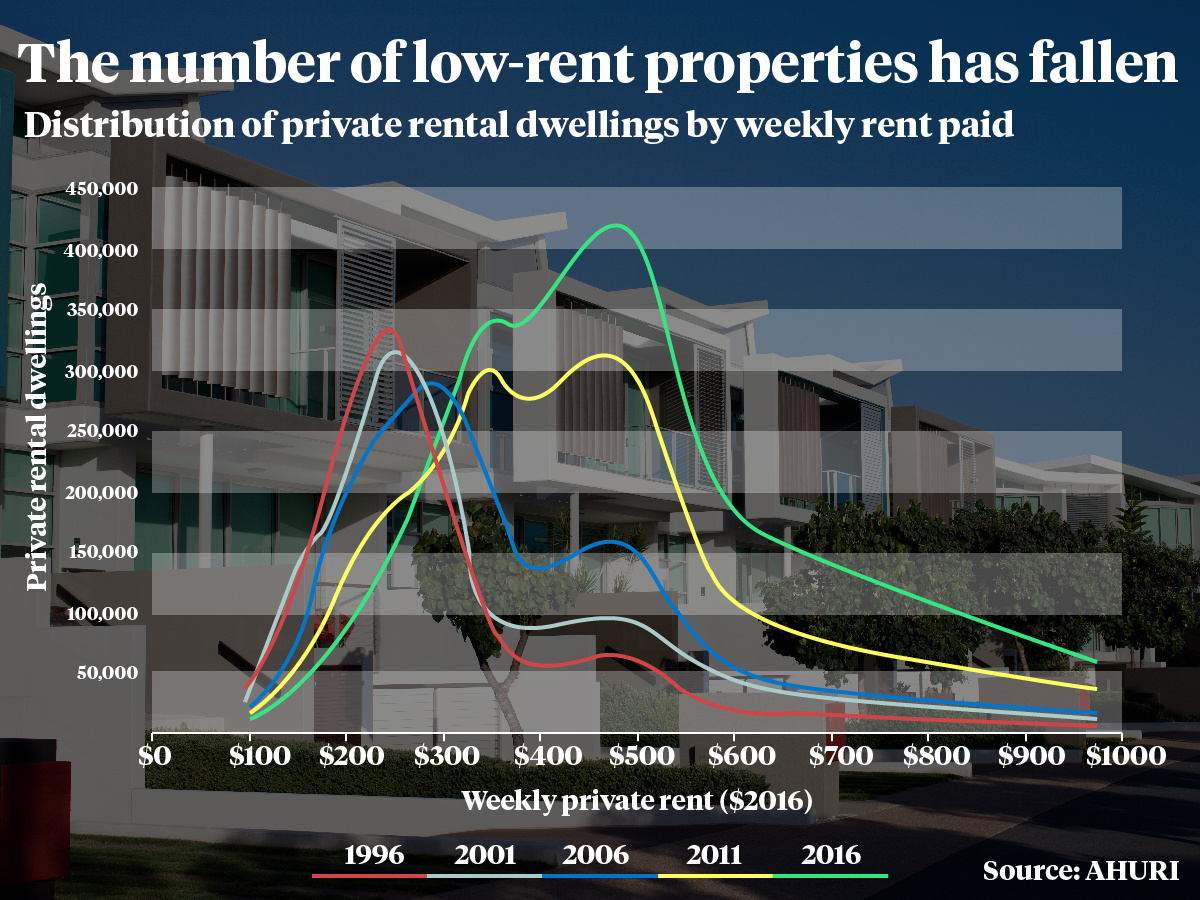 “So what are their options?

“Well, they either have to rent something that’s more expensive, beyond any reasonable definition of affordability, or – and we know this from other research – they get squeezed out of the rental market, into sharing with others, living in caravans … all the invisible homelessness stuff.”

Professor Hulse said very-low income households were struggling to find affordable homes because neither the public sector nor the private sector was building enough of them.

(Government housing policy shifted from home building to the provision of rental subsidies in the 1990s. And the private sector hasn’t filled the gap left by the fall in public funding.)

“The next 20 per cent have got a slightly different problem,” Professor Hulse said.

“There are properties on the market that they can afford, but they’re mainly occupied by middle- or higher-income households.” 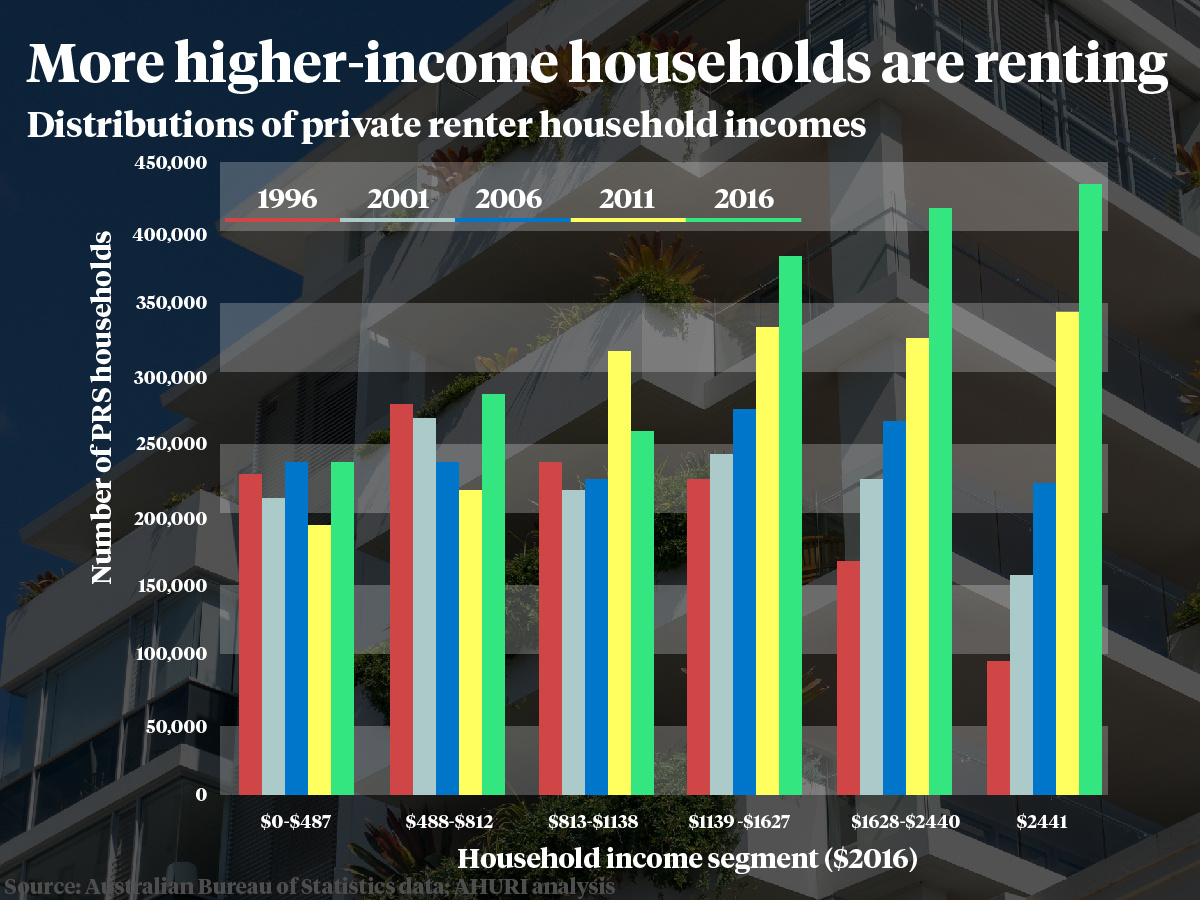 According to AHURI’s report, almost one in two (43 per cent) affordable homes for the second quintile of income earners are occupied by middle- and higher-income households.

“There’s a bit of a locational thing to this, too, which is an important part of the story,” Professor Hulse said.

“The properties that are affordable to [the low-income households] are increasingly in outer areas of large cities and in big regional towns, rather than inner or middle city suburbs.”

AHURI said the government needed to build a minimum of 200,000 additional homes over the next 10 years, at rents at or below $202 per week, to meet the needs of Australia’s very low-income households.

And it said a new and improved version of the Rudd-era National Rental Affordability Scheme (NRAS) could provide enough affordable homes for Australia’s low-income households.

Housing All Australians founder Robert Pradolin said the report highlighted how the Australian housing market wasn’t geared towards the provision of housing for low-income Australians.

He told The New Daily government couldn’t solve the problem on its own, suggesting they should lease land free of charge to the superannuation industry, so that more funds could invest in social housing.

“They need to engage with the private sector and the super funds need to be part of that solution.

“But the super funds are not charities. They need to receive a reasonable return, relative to risk, for the use of their funds.”